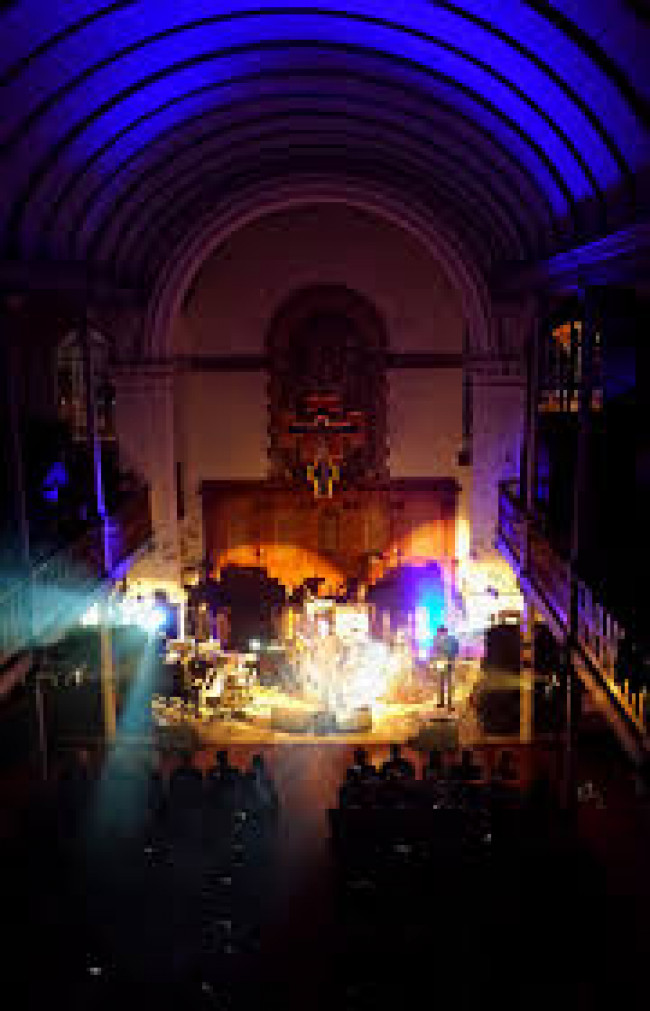 John Grant is playing Brighton the same weekend as the city is descended upon by the schmoozing masses of The Great Escape, a multi-venued festival in the style of SXSW which sees every street corner, every club, pub and bit of pebbly beach crawling with baggy-arsed, interestingly-bearded musical youth. But he’s not any part of it. You have to walk away from the centre and its frantic oh-god-we’re-having-a-good-time vibe and out into the quieter reaches of Kemp Town to find him, in a big square neo-classical church whose white bell tower is lit up by the last of the honey-coloured evening sunshine.

St George’s is a remarkable place; I’ve yet to see a bad show here. Low, with Alan Sparhawk’s agonised, angry pleas to his creator ramped up to maximum frisson by the giant golden crucifix which started to swing gently over his head; Dan Willson of Withered Hand singing his filthy-mouthed songs about being brought up a randy teenager in a religious cult as if daring the sky to fall in on him, every line humming with profanity; King Creosote and John Hopkins, their Highland love songs full of ache and beauty, turned to prayers in this maritime church… I missed Grant’s collaborator Sinead O’Connor here last year but, bloody hellfire, that would’ve been something.

The whole place shivers with resonance, turns the dial up to max for believer and heathen alike. Anyone who plays here can’t help but make reference to their relationship with the deity whose gilded corpse is suspended above them.

John Grant of course is perfectly suited to the place.

We’re ushered up into the Fisherman’s Gallery, the furthest, highest circle of wooden boxed pews, perched so we can see down to the lower galleries and across the rows of chairs on the ground floor of the church to the stage set up before the altar. The place is full, quiet, seated, agog.

It’s not just the sanctified setting that make this a special occasion; it’s so clearly a one-off event, a performance rather than a showcase or one of the myriad stall-settings of TGE, where every grabbed gig is another ticked off the list of hundreds of ultrahip newly-hatched acts.

The songs from his recent, brilliant, album Pale Green Ghosts are glorious. Grant stands, huge and bearded and brooding, at the front of a posse of black-clad Icelandic men (musician friends from his new home in Reykjavik), his beautiful deep brown voice managing to be perfectly mournful and matter-of-fact at the same time. He sings of love, of loss, of the monumentally profound effects of emotions upon the human heart; he’s funny and touching and vulnerable and melodramatic. The shimmering synthed-up edifices of his songs boom through St George’s, full of portent and awe as if they’re heralding war, pestilence and apocalypse. But no, they’re wondering why the object of JG’s affections doesn’t notice him any more (“He took away my triple A pass, I am invisible to him”) or bemoaning this “shitty town” where “you cannot even leave your fucking house without running into someone who no longer cares about you”.

When Grant makes reference to his childhood, his sense of being wrong, his forging of an (atheistic, drug-taking, gay, rock’n’roll) self from a religious upbringing in smalltown USA, heartstrings reverberate in that big wooden belly of a nave like so many gigantic cellos.

Grant’s words are mixture of the poignant and the defiantly un-lyrical. He takes feelings that are untethered to any actual concrete disaster and amplifies them until they boom around your head and your heart and the room and the city and the planet as if all life depended on whether or not a certain someone returns your smile. In ‘Vietnam’, for example, Grant claims that his lover’s indifference is “like a nuclear bomb… like the Agent Orange they used to use in Vietnam”. Wow, the self-aggrandisement, the audacity, the disrespect contained within that simile! Fucking awesome (especially when declaimed in front of an altar). Sing it, brother.

Isn’t that the way a love song – and indeed love, and indeed religion – works?  Takes the internal intangible and makes it audible, physical, present, be it a 7” single or a cathedral. The indifference of a loved one doesn’t mean the world is ending, the world in fact rolls on like the random callous bastard it is, but you can make it so in a song. “This pain, it is a glacier moving through you and carving out deep valleys… ” Grant sings. It’s fucking gorgeous hearing it here in this place, where the ranks of listeners below seem to exhale in mutual relief come the end of the song. It’s the glorification of desire, of misery, self-absorption and self-loathing magnified to a ridiculous but awe-inspiring degree, festooned with copious amounts of overly-confessional awkwardness.

The wonderful ‘GMF’ would be the song of the year if it could nudge ‘Get Lucky’ off its pedestal; maybe it’s the very opposite of that track’s relentless, impersonal, hedonistic, groove-based jouissance. “I am the greatest motherfucker that you’re ever gonna know!” he declares to his heretic congregation, as flawed and magnificent as any preacher. Several times during the set Grant seems incredulous, personally offended, that incorporeal emotions can have such a profound effect upon him.

We listen to the encore downstairs because everything is going wrong; I’m at the end of complicated phonecalls which mean I need to leave but I hang on for ‘The Queen Of Denmark’, loitering at the back of the nave. Everything is painfully sharp, some people are standing up, swaying with emotion, some are seated and frozen; I wonder whether there are tears running down their faces too. I’ve loved Sinead O’Connor’s version; I’ve smiled ruefully at the version on the album and turned up the volume in my headphones… but this? Holy fuck! The rumbling shake of the drums, the pauses in which you can hear the church holding its breath, the letting out of anguish in great guitarry gulps, the ever-growing waves: this is one of the most moving performances of any song I’ve ever seen. Aching. Fingernails drawing blood in your palm level ache. All its references to Jesus and prayer and redemption and being utterly lost, all that becomes a great howling fuck off to the world, to – in this particular place anyway – the God that allows mere human interaction to do such damage. It’s staggeringly, distressingly, beautiful.

Postscript: As soon as I get home I hear via Facebook and Twitter that Grant’s laptop (containing, he says, “my whole life”) has been stolen from the stage in front of the altar. What a strange and terrible thing to happen after such a show; presumably the thief watched him, listened to him, sat through the performance before deciding to take the opportunity to make off with his computer. Huh. Nice one, humanity.