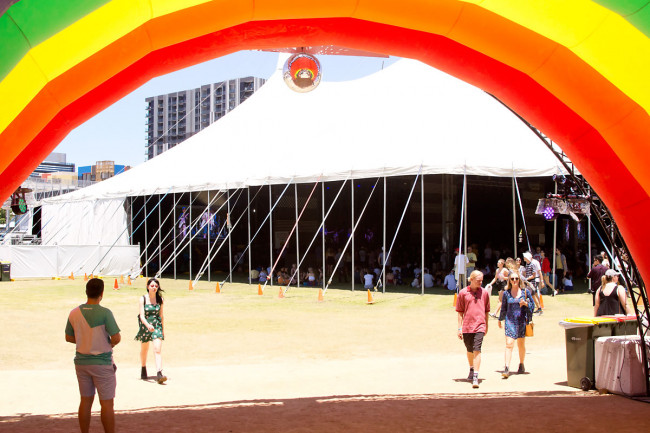 A laneway it ain’t. After a few years of hide and seek around the sun-striped pavilions of the Brisbane Showgrounds, the Laneway Festival has finally pitched its tent in the Main Arena, the wide open space used for livestock parades, sheepdog trials and the hallowed Livid Festival. Punters at the twin headline stages trample the grass, kick up dust around the edges or, in increasing numbers over this hot Saturday, take pews in the shaded stands. This hub shape makes for a tighter whole, with easy transit across the site (and its plentiful, well-staffed bars), but also a clearer hierarchy between the packed main arena and the pleasantly – or disappointingly, depending on your perspective – intimate side stages.

In terms of music, if Laneway is a measure of what’s up-and-coming as some have said, then this year’s edition stands in marked contrast to the soft-focus, murmuring wash of the back half of Triple J’s Hottest 100.

“I am not my body, I am somebody”, goes the Dream Wife chant, but it’s a physical set for the sports gear-clad band and their midday audience. Punctuated by shout outs to all the “bad bitches”, their taut groove-rock sets a welcome trend of harder-edged performances from the main stage lineup.

Rolling Blackouts Coastal Fever combine the easy classicism of their Australian rock influences with an insistent drive, which sets them apart from more lackadaisical contemporaries but gets a bit airless between the more memorable parts, like a bloke at the pub who keeps insisting on – what exactly?

Wolf Alice deliver a surprisingly heavy set to a very full tent, blacking out the afternoon sun with the darker end of their almost binary palette, to the extent that the couple of lighter tunes are almost confusing.

In the sloping cul-de-sac of the Spinning Top Stage, the smaller crowd huddle in precious splashes of shade. Alex Cameron is more normal, or at least more subtle, than his media persona suggests, though there’s a winking grace to his music and presence. He spares a thought for his friend and collaborator Kirin J Callinan, attracting a few cheers before ‘Studmuffin96’, a ballad about waiting for a lover to come of age. People also cheer every time the saxophonist plays his instrument.

Later on the same stage, Alex G performs his beautifully odd, clammily intimate songs in full sunlight, with jigsaw chords and cornered melodies occasionally opening out into breezy country or piano-led pop. Without the production quirks of his albums, it’s an endearingly low-key yet sincere performance with a lot of feel.

At the paved courtyard of the Future Classic Stage, the two members of Sylvan Esso win the crowd over with their contagious, down-to-earth exuberance and affecting bangers. Songs like ‘Parad(w/m)e’ and ‘Hey Mami’ have a piercing simplicity and welcoming space that people rush to fill with a mass dance-and-singalong. Dancing is also the focus at the Red Bull Stage, a half-hidden oasis in the shade of a giant fig, where there is no beer to be found but energy drinks flow freely and amyl is passed across a sea of reaching hands.

As a passing shower clears into a rich orange sunset, Father John Misty and his many-duded band fill the main tent with a big, slow, ‘I Love You Honeybear’, signalling that they’re tilting for ‘epic’. Back in the cul-de-sac, Aldous Harding summons the night with a spellbinding performance to a shockingly small crowd. Against a backdrop of distant lightning, the modern folkster alternates between standing like a rod and slouching with a guitar on her lap, progressing delicately with her band through her singular catalogue and some promising new material.

Mac De Marco‘s set has the main stage as packed as it gets, in what feels like a victory lap for the Laneway veteran. A role-playing video game provides an apt backdrop for his slacker pop. ‘Viceroy’, a refreshing breeze of a song, takes on the flavour of an anthem.

Next it’s out again to see Slowdive offer a masterly, shamelessly gorgeous performance to a riveted, quietly emotional crowd. They draw from across the catalogue, with the classic Souvlaki outnumbering last year’s incredibly strong return Slowdive and even the otherworldly, underrated Pygmalion getting a look-in via the delay-led ‘Crazy For You’. At set’s end, Rachel Goswell sings an almost a cappella rendition of Syd Barrett’s Joyce-quoting ‘Golden Hair’, then exits as Neil Halstead leads the band to the last and loudest of several pounding guitar climaxes, simple and devastatingly effective.

The big top has spread out a little, leaving room to dance to Bonobo‘s lush, lit up set of organic electronic music. The producer is joined by a live band, adding power to the world-flavoured house tracks and nuance to the downbeat, jazzy numbers, including through their captivating vocalist. Like Slowdive, they invite revelry in the sheer sensuousness of sound. Next, ODESZA tone down the eclecticism but ramp up the stagecraft, especially with their crowd-pleasing, space-themed visuals. After all this dessert, the War On Drugs offer a welcome nightcap to some, while for others – myself included – it’s time to turn in.