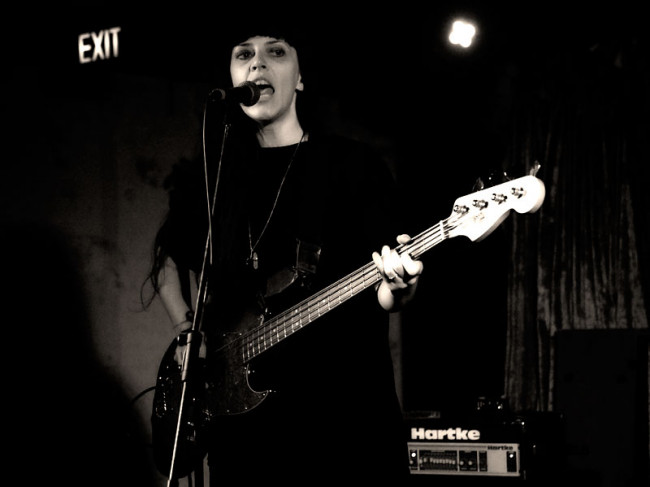 Time may be getting faster every year but it’s crazy to look at how much Bedroom Sucks Records have achieved in the last five years, their first five years. As the man said, they’ve put out some of the best music in Australia in that time and keep going from strength to strength. By comparison, Collapse Board celebrated its four year anniversary at the end of August and while we continue to dwell on the fringes, Bedroom Sucks keeps on manoeuvring itself for a full global assault. (I think we just peaked too early. Plus we’re like the Millwall of music writing; “no one likes us and we don’t care”).

To celebrate the fifth anniversary, BSR have put on a series of anniversary shows in Melbourne, Sydney, Newcastle, Adelaide and tonight in Brisbane to showcase their achievements with some of the acts signed to the label.

There’s no two ways of looking at it, Thigh Master is a great name for a band. They’ve got that primal post punk sound so beloved by so many Brisbane bands but combine it at times with that just out of tune 90s slacker rock. They’re at their best during their allotted 30 minutes when they get the twin guitar attack going for that that sweet fist pumping moment. They have a song called ‘Ric’s’ and joke that the birthday show should have been across the mall at Ric’s. It’s a one-liner that probably betrays their age, where as for an older crowd, the demise of Ric’s is something too sad to joke about.

Out of all the BRS releases, the Primitive Motion album is one of my favourites and most played. I’ve only seen them play just the once though and I ended up writing some lukewarm words about the experience because it didn’t do justice to the songs in their recorded format on the album. I found them disappointing because it was all too harsh sounding and not lush and textured enough. Tonight is different because they are different and don’t play any songs I recognise. Instead of being disappointed by comparing them to their studio output, I’m totally enraptured with, what is to me, a completely different set of songs. Afterwards Everett tells me the first song is a cover by one of the Dunedin bands, although he can’t recall which one. Leighton introduces the second song as one they haven’t played for about three years. By the third song Sandra is on her third instrument of the night, having started behind the drum kit, before moving to the saxophone for the second song and finally to flute. It’s these songs, the third and the fifth, that have Primitive Motion at their peak, blissed out and sounding spell-binding. These songs remind me of early Spiritualized before they became too overblown and pompous. It’s music for lying in a field on a warm, light summer evening watching the sun eventually set over the horizon. Glorious stuff and if these are songs from their forthcoming new album, 2015 is going to get off to a great start.

Superstar aren’t the band I was expecting. Having checked my photographic records, it turns out I had somehow confused them with Holy Balm but both of them played at a Deadshits night at Woodland back at the start of 2011 so there is some rationale behind being confused. Instead of the more electronic dancey three-piece I was expecting, I get a female/male duo with lots of chorus and delay pedal action and those 1980s glassy keyboard sounds throughout. It’s at home late at night music more so than it is something I want to see on a Sunday night out in town. It’s the sweet sound of my bed calling me after a long day. Because it’s those things, it’s a struggle to enjoy as it’s just too soporific for where I want to be with another couple of acts to go.

I have a theory about live music photography which is that it’s all about hands. I learnt long ago (mostly from fashion photography) that it’s totally ok to chop the tops of people heads off, and that those crops work, but when photographing a musician playing an instrument on stage, if you don’t get both of their hands in the frame, it just doesn’t look right. It’s because of this theory that keyboard players are the worst to photograph; the height of the stage prevents you from fully capturing their performance. Peter Escott plays his set on an off-stage upright piano in the space between the merch table and the stairs and the roughly formed semi-circle that surrounds him gets to actually see him playing up close and personal. Given the rarity of a performer to play like this, it feels like a special moment and there’s something quite exquisite about the whole set-up. But despite the quiet nature of the solo piano and his voice at the back of the venue, well away from the speakers, most of those assembled around the piano decide that even in this close proximity, less than a couple of metres away, they’ll just use the opportunity to keep on with their conversations.
It’s a pet hate but tonight it just feels teeth-grindingly rude and I have to move back to the front of the venue nearer the speakers and away from a bunch of people I want to murder. I don’t have a view anymore but at least the proximity to the PA system helps drown out all the background conversations. Its stunning stuff to observe close up, just such a shame about the chattering masses.

A quick straw poll is unlikely to find anyone whose preferred time to be out seeing a band is 11:15pm on a Sunday night. The original plan is to only stay for a couple of Terrible Truths’ songs to get some photos.  Instead I’m completely blown away by them so stay until the bitter end, which, as it happens, is only 20 minutes away. I don’t know any of their songs or the titles but it takes less than half a song for them to not just become my new favourite band but also the best new (to me) band that I’ve seen in a long while. It wouldn’t surprise me if they get lazy comparisons to The Slits given the female vocals and reggae-influenced post-punk sound but it’s a whole lot less playful and fun and much more frenetic and frantic, more like Gang of Four at their best, especially with those call and response vocals. Not just Screaming Match good but *whispers* Screaming Match better. Sometimes, in addition to really enjoying a band play, you also just have to quietly contemplate how you’ve managed to miss a band this good for so long.

Happy Birthday Bedroom Suck Records and here’s to your next five years.