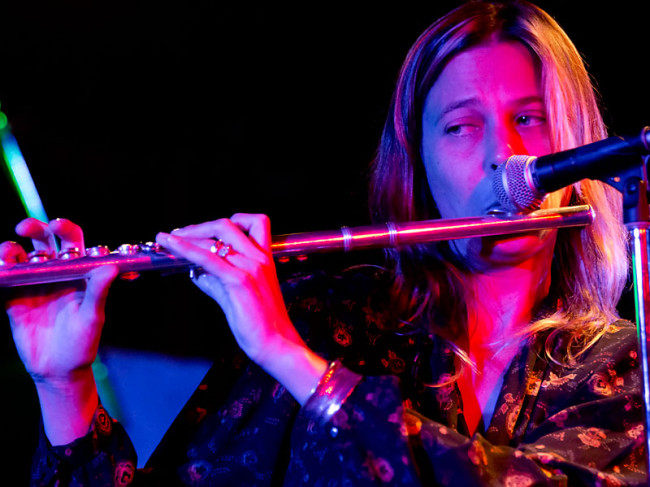 Bardo Pond shouldn’t have faces. This isn’t a critical judgment on my part (“Guys I love it but could you try it with the balaclavas for me?”), just an expectation produced by the music.

Bardo Pond play psychedelic music, in fact they exemplify a certain riff-based kind. If psychedelic music can be traced back to a certain branching point, it’s this: at some point, some musicians stopped using technology to attempt a sonic facsimile of a “natural” performance by real people in a real space, and instead started exploiting the unrealistic attributes of electronic sound – amplification, effects, multi-tracking – to create spaces and performances for which there had never been a “natural” equivalent. (Of course, unreality in music goes way back: what’s natural about hearing a gently crooning voice over a brass band? Frank Sinatra was the first psychedelic artist: discuss.)

Bardo Pond shouldn’t have faces because their music doesn’t sound like it comes from people, or at least not specific ones. Even in the heavier numbers you don’t hear the attack of guitar strings being plucked; waves of fuzz just swell out. The (the?) voice isn’t coming straight at you from the middle of a room; it’s floating past on some kind of space wind. And that flute, when it sounds like one, is out of any known context. Maybe some uber-fans can see crystal, Sonic Youth/Beatles-esque images of all (however many) band members, but for me, apart from a hazy idea of a singer/flautist called Isobel, their records are less like visiting people and more like dipping into places (imaginary ones, of course). The album art that avoids depicting anything for which a noun exists, and titles replete with obscure drug references, don’t give you anything more concrete. Even the press photo that got splashed around for this tour had the heads cropped out. Isn’t that the goal of psychedelia – dissolution of the ego?

So seeing Bardo Pond live – five of them (!) with specific bodies and faces and individual egos – is like taking your kid to a toy factory. “See all those toys you like? They’re put together by other kids who are just like you!” Some innocence is lost, but some wisdom’s gained.

It’s weird seeing such propulsive music come from relatively static humans, but Isobel belts out the vocals with a clear physicality that goes way beyond her more whispery recordings. Seeing guitar players, with arms, I realise the amazing ‘Cracker Wrist’ is probably named for the tendon condition caused by playing the fast, asymmetrical guitar riff the hundreds of times required before the song cracks into its second half of beautiful sludge. Another from their most recent, self-titled album, ‘Just Once’ starts with one of the few moments where they actually do return to the guitar-plucking, campfireside bodies from which the tripping souls take off, but the thrilling part is when they explode back out. Frankly I couldn’t tell you what, if anything, they pull from the vast and subtly varied back catalogue, but the flute makes some stellar appearances. We are treated to a few new songs and are pleased to find they are more of the same, thankyou. The undoubted highlight is ‘The Stars Behind’, which like the VU’s ‘Heroin’, Electrelane’s ‘To The East’ and Life Without Buildings’ ‘New Town’ proves the maxim: three chords good, two chords better. Especially when you play them over and over; for a moment I feel like I’ve never wanted something not to end so much.

The local supports were ideal picks. Ben Thompson’s solo Pale Earth takes the psychedelic project forward, melding warm guitar textures with crackling synth and drum machine. And Dream Time, who finally won me over (and how), take it back to the roots. They capped off their groove-heavy, bass-and-guitar-led set with a piece that began by passing around a microphone set to loop, each member adding a hum or a percussive rattle until a state of primal communion was evoked. Then they played some sweet riffs.

I’m all for mystery – check out my bio up there – but I’m equally for demystification, because that’s how you get to deeper mysteries. The possibility of a universe without a creator is, if anything, more miraculous. Music, on the other hand, is demystified when you remember that it does have a creator. In fact it has heaps of them, and potentially infinitely more. And that’s the deeper, cooler mystery.