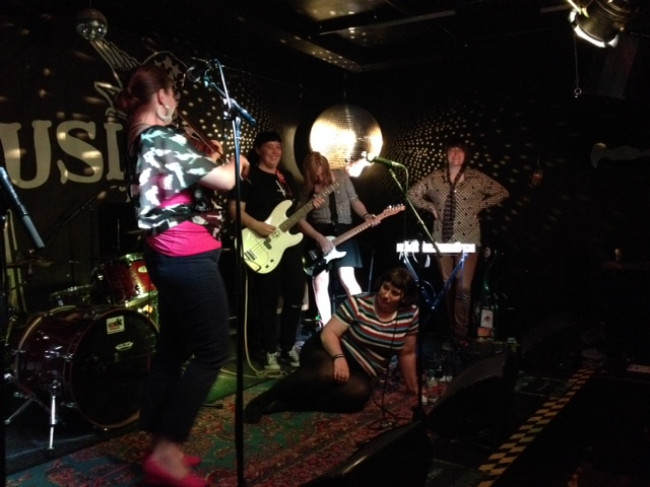 I’m gone.  Solid.  Stuck here, thinking.  Stuck here, thinking that Tamsin can articulate loneliness and hope and the thrill of the dance floor much better than I ever could.  Stuck here, entertained thoroughly by all the shenanigans going on on stage.  Stuck like glue.  Stuck here.  Of course it is sadder not to dance at all than to dance alone.  Of course we all – kindred souls us; the trans folk, the gentile hipsters, the students, the old and weary – are stuck on the edge of a dance floor, not allowed in except for brief brilliant bursts of crimson.  Of course my head is bobbing.  Stuck, caught in a trance.  Paralysed.  Doll-like.  The difference between Slum Of Legs and most anyone else is that if Slum Of Legs don’t get me, they’d tell me to my face.  (Not Brisbane at all, then.)

Of course Tamsin is a role model for the generation who do not fit anywhere, why would she not be?  Her stage banter is delightful.

“Look at those two,” she points stage left. “They even have their own language worked out, their own secret signs.  They are going to SLEEP WITH EACH OTHER and yes I’m jealous.”

This following song is Hangovers good.  No, really.  A tradition of female music that is still blossoming and spreading and growing.  I know which side I am on.  I have always known that.  Menace and paranoia and anger and beauty and those little dead snails that lie forgotten underneath the real Brighton Pier.  Squidgy and psychedelic and with more imagination than three of your giveaways.

That song is played, as is ‘Sasha Fierce’ (which is Slum Of Legs’ own ‘Cherry Bomb’).  This next song is the one that captivated my heart, despite all my entreaties against such a happening: so dangerous, so close to home.  “The end of term and we won’t return/So we lit a match just to watch it burn/Shadows grow long and the days glide on/But but you can’t forget that you will never belong”.  It was written about all of us in our Oxfam dresses and clodhopper shoes, surely?  So beautiful and so poignant.  Such a violin part!

Such a violin part.

Such a voice.  This is what I always sounded like, in my dreams.

It is not played but still I have a crush on anyone I happen to see tonight.

The title of my last three blog entries is misleading, I fear.

1.  It is not just the violin-player from Slum Of Legs I have a crush upon.  Although she is terrific – vibrant, alert, smiling – she is only one component in an entire orchestrette of terrificness.  Tamsin is terrific because Tamsin is Tamsin and Tamsin cares deeply what other people think of her while simultaneously not giving a shit.  Michelle on drums is terrific because she thumps them and stands up.  Everything is terrific.  The keyboard squidginess.  The guitars,  the bass, the drums, the crowd, the lighting, the sweat, the smiling faces, the oddly potent Kronenbourg beer.  This is like Talulah Gosh if they were the Mekons.

3.  I wanna make out with someone RIGHT NOW!

4.  This is irrelevant.  The music is what matters and this music validates me.

For 35 brief minutes I have found my home again.

I leave just as Tamsin is pulling down the keyboard-player on top of her, and catch my bus with two minutes to spare.