Highlights of 2013 (from a rookie music critic) 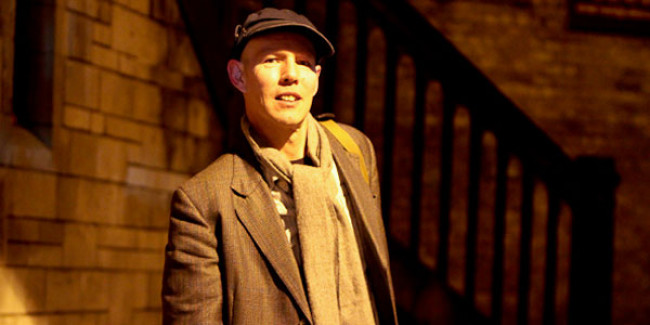 You really don’t have to listen to me. I’m not in a band (although I can whack some drums for ya, or toot on the ol’ licorice stick), I’m not a retired cog of the music press machine. I’m not even 30 yet. This is my first year on the new music safari – the first year of waiting for record releases, of craning the ear to the horizon, of hotwiring the words and sounds of the illuminati to the brain and falling into the firing range of the PR/blog/ezine militia.

This is also the first year of small labels, of the long letter exchanges across dull summer doldrums, of the local record store, of loitering in said record store, and of the always nerve-wracking gig-going ritual, only mollified by the bubble of joy and sanity provided by familiar faces. Oh yeah, and graduate school.

That all aside, I’d implode if I didn’t mention TUNABUNNY TUNABUNNY TUNABUNNY. Genius Fatigue can’t be on this list, since technically it wasn’t released this year, but FUCK. The world cracked open anew, roads unfurled from the center, and I drove those mothers down whenever I had the chance. I did not find them, but Mike Turner found me first, a nutter weaving in frantic circles around the Record Day crowds and asking for odd things like the James Chance and A Certain Ratio comps behind the glass case. He laid the snare and I tumbled in.

TUNABUNNY, I cried to the world, and people listened, too. DJ folk. Club folk. Writer folk. Label folk. Little constellations in the cyberspace. Those lovely tunabunnies never needed me, of course. But Genius Fatigue and Minima Moralia and the CD-R of unnamed tracks with a defunct album title were 2013 to me. Spreading their name was spreading love, pure and unadulterated.

ANYWAY. You’re tapping your foot by now, and you demand the list. OK, OK. But be gentle with it, will ya? It’s not just any best-of list, no here’s-what-happened-in-the-biz synopsis. These are moments of clarity, month-long binges, new pieces of identity. Not the full story, either, but certainly the chapter headings. I owe most of these to Dandelion Radio, but not exclusively. In a roughly chronological order:

I fell in love with Audio Antihero. The tiniest of tiny labels, the little treehouse huddled in the grey London wilderness. And if the members paid their dues, the club leader would send out a shiny new digital single every month from that great salty sage, Jack Hayter. This was near the end of that glorious single series, but my first gift. Ohhh, Charlotte. How I adore thee. I hear this and I want to be up on deck with you, scouring the seven seas with your bad pirate self.

Another crush. But really more of an addiction. Dissolved was soon not just a name, but a drug – a psychedelic, at that, one that summoned the most vivid of underwater dreamscapes, of crystalline caverns, hazy rainbow labyrinths, and white lightning beat emitters. Layers and layers of brightly colored chemistry experiments, released in bursts of sparks across decades – and then there’s this. Yes, the whole Surge Of The Lucid LP is truly stellar, as in among the stars – but there’s this. The intoxicating rhythm. The downward spiral from fascination to insanity. You can feel your DNA rearranging itself.

Laurence Made Me Cry – Between Destinations

No, YOU make me cry, Jo. I do – the sweet light washes over me on ‘All That Patience Brings’ (first track on Diary Of Me, her debut) and I feel light and teary and free. This was the first one, though, the magic that conjured the patchwork album into my hand – yeah, it’s simple, as simple as the sunlight streaming from the kitchen window, as simple as a child’s crayon portrait of the family. But it gets me every time: “Is it only me/who wonders through the window/just how magical this world can be?”

Tingle In The Netherlands – Housewife’s Lament

Did you just giggle? Please say you did. In this world of straight serious look-we’re-in-the-studio pricks and one-word mundane band names, you can always giggle at Tingle In The Netherlands. I heard them once on an electronica radio show, and they stuck out like a pickle spear in a ham sandwich. Everyone else was donning their sharpest Depeche Mode suits, in their hermetic and sanitized production studios – and then the dynamic duo from the Tingle Towers bubble in, with their John Foxxy gear and dry ironic wit – and HUMOR, thank god, the naughty (finger wag included) humor that goes down like cool cool water in this sweltering, shimmering desert of cut-and-paste synthpop wankers.

The month after this came out, three Dandelion Radio DJs featured this ballin’ track on their individual programs. With any luck, this should pop up no less than three times on the Festive 50 countdown. Because every time I hear those stupidly loud guitars crank up, I can’t help but grin. Stupidly wide, of course. I want to jump and skip and cry out “If you’re a cunt” a million times over. Of course, Council Tax Band have a particular axe to grind, one which I can only admire from a distance… but I do wish I had an axe like that.

Over the summer, I played staff writer for GoldFlakePaint, that shiniest of shiny ezine sites. And Tom knows what the kids like – the wide-eyed dreamy wonders, the earnest guitar ballad types, the breathlessly stylish techno blankets. Sometimes these things are dross, quiet rituals for the lonely breakfast at the desk. Sometimes, though, you hear snatches of the divine. Like this. Oh, how did I try to sell it many moons ago…something about “sun-drenched nostalgia” filtered through “sepia shades”, or a faded “flower-power history”…ack. I should’ve said that this stuff just makes me melt. Slowly. Into a brainless, pink, simmering cream. Making this sound: uhhhhhhhhh.

PS: This is actually a longer version than the recent one I’m familiar with. Which is absolutely fine – if this could be extended to 12 hours, that’d be cool too.

BODYWORK – Lift Up Your Love

Hey, do girls have orgasms? Have I had an orgasm? I probably would’ve never cared in high school, but now I’m kinda curious. Especially since I’ve listened to BODYWORK. Because how else could I know that ‘The Grind’ is pure sex, when I’ve never had sex before? This track isn’t, though. This is more like The The’s ‘This Is The Day’, but in a bedroom with all the lights out, curtains drawn, and a slow dance with your lonesome self. Trust me, I’ve done it a dozen times. Just not always in the bedroom – sometimes in the basement, once on a Saturday morning when no one else was in the huge stretch room of the gym and I couldn’t keep the secret in much longer.

I saw some “real” music experts from Billboard on Access Hollywood this evening. (DON’T JUDGE – me mum eats this stuff up, almost more than she eats food at supper time.) They looked exactly the same – bald, thick-set dudes with black-rimmed glasses, except the second dude had slightly darker skin. And one of them was talking about the first time they heard Bangerz – “I walked out of my office and said, ‘Guys, this is the year of Miley’, although no one believed me at the time.” What a dull, stupid, conventional, non-passionate, consumerist reaction, I thought. And yet (you idiot – I am, my brain short-circuits often), didn’t I want to whisper the same thing when I heard this? Didn’t this harsh urban glare and sharp brass swagger sound to me like the next media swarm, a catalyst, a buzz-worthy press darling? I’m just glad that, unlike that groomed square, I was 100% wrong.

PS: This is also not the album version, but one of those gimmicky stripped-back-session things. But Joshua Idehen still owns the mike, and that’s really what matters most.

Once ya hear a couple dozen of Mark Wynn’s casually off-kilter, gleefully nonchalant, wandering messy tunes, you know exactly who the bloke is: a slacker, a lazy bum, but deep down a real nice guy with an acoustic guitar, if only he weren’t so naturally cynical about other folks (but then again, so am I, which is why I loves him even more).

You already knew this one. You didn’t know, however, that the band sent me a free copy of the cassette, and that I keep it in my car like an emergency kit, to save me from the squares and the confident people. The balm is paranoia. And it’s in this vial. Tape of the year.

I told you, I fell in love with Audio Antihero. But when Jamie slipped me Comfort Songs, I wanted to reach across the oceans and hug the poor bloke. All I could do is type, as emphatically and swiftly as possible, that this was it, bub. The world will fall in love with this. Unity, unity for all the lost young souls. You’ve done it, you’ve done it. I wish I could’ve cheered, not just in type, but literally, jumping and crying. Cloud, the great big happy recording collective family who spent many a summer throwing outdoor concerts for all their friends. Young bucks, dreamers all, and especially Tyler, whose ultimate ambition is to write television shows for children that “could be as great as Hey, Arnold!”. Suddenly all the hotshot blog writers clamored to throw their two cents in on it, while I was still choked in happiness and trying to gather up coherent words. Finally – a month later – I managed this: “In Comfort Songs I find a time for reflection, a confirmation of life and its wonder, and a sense of belonging – to whom, I’m not certain, but to someone.” I still don’t think it was enough.

UGH. Noise. I’m a sucker for it. For raw violence. “You want it? You got it.” UGHHHHHH. A car screeches down a twisty road at night, straight toward a cliff, and everyone’s hands are in the air. It’s the best time of our lives, and who the fuck cares if it’s about to get bloody. The fact that this will never happen in my life makes this tune all the more necessary. At least I can pretend – just run in mad circles around the room, gyrate in the wildest fashion, and I can cheat death without the car or the friends.

No hyperbole – when I first heard this, I nearly fell out of my seat. DA FUCK IS THIS? DA FUCK?! How can some anonymous blokes from Croatia compress so much perverted aggression and black, black humor into one seething, pulsing EDM beast?! HEY! HEY! SHOOT THEM WITH LASERS!! This begs to be blasted out, to destroy polite and politically correct society, or least make ‘em really fucking uncomfortable. If anyone tells you this is annoying, you just tell them what WUSSES they are.

And finally, to round out my totally incomplete list, here’s this most radical feminine punk rant from the righteous girls of Good Throb. Girl Power (as outlined in Ablaze! #10) lives on, yeah?