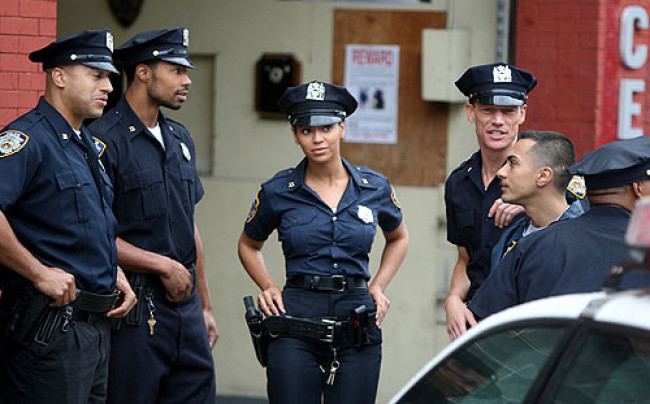 Beyoncé – If I Were A Boy
https://www.youtube.com/watch?v=AWpsOqh8q0M
The first song I think about when it comes to gender. I know some may say it’s about sexism/feminism/equality, but when I first heard it, it made me feel a little less odd for sometimes wishing that I could be a boy, too, ‘even just for a day’ (as the lyric goes). If Queen B – arguably the strongest, most independent and confident woman in music since as long as I can remember – could say that kind of thing, then it made it ok for me to say and think it without having my gender and sexuality questioned.

Wild Beasts – Hooting And Howling
https://www.youtube.com/watch?v=DwHoh2vNdiA
I’ve always admired Hayden Thorpe from Wild Beasts. A lot of my friends shrugged the band off immediately as annoying and attention seeking because of Thorpe’s counter tenor vocals, as if any of his lyrical meaning was irrelevant because ‘that’s not how men sing’. I was glad that Thorpe’s lyrics and vocals made my friends uncomfortable; it showed how fragile they were, that a man who had feminine qualities threatened their egos so immensely. Wild Beasts observe the fragility of the masculine image and its misogynistic traits. They spotlight its insecurities and reveal what the masculine image truly desires; the human condition of wanting to be understood and be loved.

Bob & Tom – The Man Song
http://youtu.be/MeznTN0YW-4
Bob & Tom – The Woman Song
http://youtu.be/GpZcCpdFILY
Growing up in America and having American neighbours when I moved to Australia, I’ve been exposed to many unique forms of entertainment and music. One of which is the radio duo called Bob & Tom. They are comedic radio hosts who have people come live in the studio and perform songs. Their music has been collaborated into CDs many many times and have seen a lot of success. The following songs are some of their best. They highlight both sides of the gender spectrum and are somewhat stereotypical and satirical of what men and women are like in marriages and relationships and how they might behave. They are quite amusing! Please note; that I do not intend to be rude by posting these. I find them funny for what they are (comedic songs) and I hope you do too.

MC Layla – It’s Only Me
https://www.youtube.com/watch?v=mp7dtGWV6Zo
So I am just a little bit obsessed with Australian hip hop. This song by MC Layla deals with the issue of gender inequality in the hip hop scene. MC Layla is one of the only women in Australian hip-hop and her first performance was a battle where she was the only female rapper there among 20 other male competitors. This song deals with the fact that hip-hop is male-dominated and a woman doing the same thing is not taken seriously.

Maddie & Tae – Girl in A Country Song
https://www.youtube.com/watch?v=_MOavH-Eivw
The past few years have seen the rise of feminism in popular culture and popular music. Female pop stars are taking over the world. Beyoncé’s tours dominate cities and sell out arenas, as do Katy Perry’s and Lady Gaga’s. For the first time in a long time 2014 saw a female only top 5 billboard chart, and the delightfully cheesy ‘All About That Bass’ sparked more discussion about feminism then anything I can remember.

However, with all this, has the stereotypical female gender role really disappeared? Beyoncé, who is often praised for her poise and message of female empowerment, received criticism for titling her tour the “Mrs. Carter Show”, with many accusing the singer of betraying feminism by taking her husband’s name. And let’s not forget the infamous Miley Cyrus performance at the MTV Video Music Awards. The biggest problem with applying feminist standards to music is that self-described feminists are too ideologically diverse to focus their anger. So as much as I might want to forget the image of Miley desecrating a foam finger and grinding against Robin Thicke, is it not stifling her sexual expression to command her to put some clothes on and take a seat?

This song was one I stumbled across and loved not only the video clip but the message. Country music is pretty well known for its crass depiction of woman and its also lovely to see girl power in all genres of music. This song demands respect, and reminds all females pretty and sexy is not the rent you pay to exist in the world as a woman.

Lou Reed – Walk On The Wild Side
https://www.youtube.com/watch?v=RsVLIiI8Vfo
Also, when I happened to mention this topic to my mum she looked me dead in the eye and started singing “Holly came from Miami F.L.A. Hitch-hiked her way across the U.S.A. Plucked her eyebrows on the way, shaved her legs and then he was a she. She said, hey babe, take a walk on the wild side” and I couldn’t believe I’d never known this song was about a transgender person. I can only imagine it must have been pretty revolutionary for 1972.

Against Me! – Transgender Dysphoria Blues
https://www.youtube.com/watch?v=HEE7iw5WYJI
Title makes it a bit of a no-brainer, but Laura Jane Grace (formerly Tom Gabel) of Against Me! has become a bit of a transgender icon, and with the band’s ties to the male-dominated punk rock subculture this is an encouraging step forward for the empowerment of transgender people. Not discounting other trans artists such as Antony Hegarty, I’d say that Against Me!’s stereotypically punk “no bullshit” musical/lyrical style has resulted in this issue gaining widespread acknowledgement among previously unaware/ignorant audiences.

Janelle Monáe – Q.U.E.E.N. feat. Erykah Badu
https://www.youtube.com/watch?v=tEddixS-UoU
For me, this song epitomises that you don’t have to be 100% serious all the time when preaching a message of self confidence, gender, race and sexual equality. So what if you’re more feminine or masculine, doesn’t mean that you can’t have a damn good time without your beliefs being squandered because of it.
“Is it peculiar that she twerk in the mirror?
And am I weird to dance alone late at night?”
“And tell me what’s the price of fame?
Am I a sinner with my skirt on the ground?”

India.Arie – Video
https://www.youtube.com/watch?v=Mq86e4Fhja0
…. and neither does India Arie.

Perfume Genius – Queen
https://www.youtube.com/watch?v=Z7OSSUwPVM4
This song is about subverting the stereotypical picture of one’s gender and showing that masculinity/femininity can take many forms. In this song and accompanying video, Perfume Genius, who feels alienated from his gender due to the fact he is a proud, effeminate gay man, reclaims his masculinity by embracing his femininity. In a 2014 press release, he explained that ‘Queen’ is a direct response to having encountered gay panic. In his words: “If these fucking people want to give me some power—if they see me as some sea witch with penis tentacles that are always prodding and poking and seeking to convert the muggles—well, here she comes.” ‘Queen’ plays on the way that he is perceived by an ignorant public, and, in doing so, allows him to reclaim and embrace his image as a powerful, intimidating creature… something to be feared.
But WAIT – there’s more!

Blur – Girls And Boys
https://www.youtube.com/watch?v=WDswiT87oo8
(makes reference to the fluidity of gender and sexuality)

GIRLS – Lust For Life
https://www.youtube.com/watch?v=DCtgv3ystzY
*note – all band members are in fact male* (the vocalist assumes the perspective of an emotional teenage girl with “daddy issues” – thought it would be interesting to include a song written from the perspective of a female, by a male.)

No Doubt – Just A Girl
https://www.youtube.com/watch?v=PHzOOQfhPFg