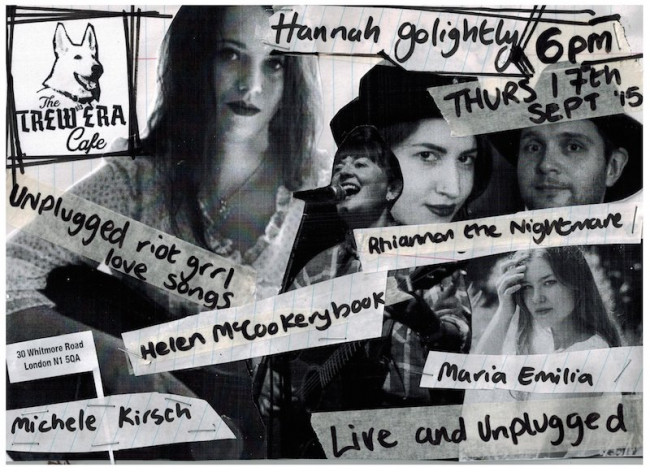 I love gigs like this. The cafe was packed and the gig had already started when I got there at about 6.30. There was a duo singing, two guys, one on bass and one on guitar, singing mellow early evening songs. Next up, the cafe chef Michele read out the correspondence between her in the US and her cousin in Liverpool, who was four years younger than her, from the 1970s. The letters were hilarious, centring on music and coolness (the Bay City Rollers versus the Sex Pistols and the Clash), puberty and one-upmanship (or one-upgirlship). I talked to her afterwards and apparently they are still really close, and so are their kids, in spite of some misconceptions about each others’ culture. This was a really good start to the evening; next came Maria Emilia, who played a selection of songs that she had written (I particularly liked Pillow Man) and who gave out red roses at the end of her set. There followed a duo who played quirky, angry songs (I will find to what they were called) and then I played an unplugged set, which seemed like the right thing to do because it was a cafe and that’s what we did in Mount Holly! I had been writing about electronic mediation yesterday afternoon and something made me just want to set aside the microphone and the amplifier and be really direct and informal in the singing. Bravely, I did it without a hat; I had paid a rare visit to the hairdressers and she cut far too much off, making me look like a triangle on a stalk. Never again, never again! The hat went on again for the journey home.

Mike Roberts was there, who did the Bleeding London photography project that I recorded London for, and he spoke about it to everyone. I was delighted that he had achieved his £1000 target and I played London and Heaven Avenue for him. Nice to see Lester Square and co. too (apparently he lives down the road).

Hannah headlined, and I really enjoyed her feisty songs. She has a strong voice and isn’t afraid to use it to good effect on songs that deal with looking at love from all angles- including being beaten up. Take a leaf out of her book, Rihanna, and stop pretending that it’s an OK and normal part of relationships! I filmed her set and you can see one of her songs here:

[As editor, I exercise the right to post another video from this set, and so I shall. – LA]

Hats off to Hannah for organising a great event! This is a great cafe in an amazing part of London. Please pop in there if you can and support the people who have lived in the area for years, and whom the authorities have tried to socially cleanse to make way for bankers, foreign investors with big bank accounts and no consciences, and their ilk.

I sang the “Daisies” song for her because she likes daisies, but also “The Song of the Unsung Heroine”, because that’s about doing all this stuff for other reasons than becoming famous; when roughly 60% of British exports are weapons designed to destroy beautiful things and people, anyone who comes down on the side of creativity and peaceful protest is pretty much OK in my book. Here goes:

My next gig is supporting The Daintees next Saturday at The Sage. I love gigs like that too!