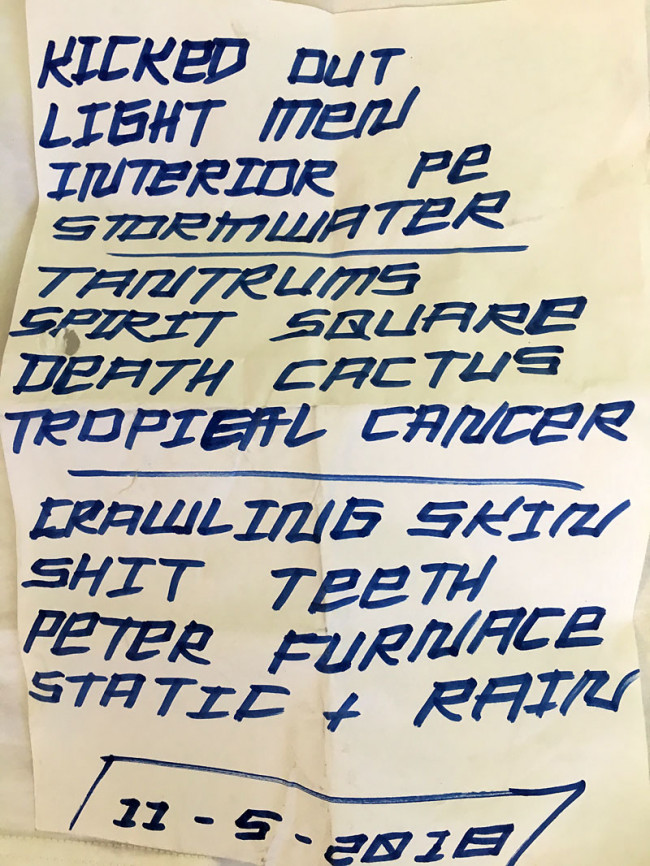 Words and photo by Ben Snaith

The show is in Rehearsal Room 1. This means that tonight we are in a small box with a low ceiling and the bands filling half the space. The lighting is subtle, the smells are apparent and the door price is $5.

At this moment, I’m grateful to be living in Brisbane where the acts that play alongside each other can be sonically disparate – it’s good for the ears.

Soot are the first band. Tonight they are a drummer who sings with a deep voice; a bass player who sings with a sneer; and a person who plays a cello for the first song, then goes between xylophone and trumpet for the rest. They lock into awesome caveman pop grooves. The drummer is spreading themselves across the kit – tom-heavy. They are hitting the snare seemingly at random, while providing enough space for the trebly bass-lines to maintain the speed and haphazard spirit. The xylophone and trumpet adds melodic texture which are a great point of difference. My favourite element is the call and response of the vocalists, their voices and overall vibe complement each other well. The sneer has passion, curiousity and brattiness; while the baritone is more reserved, mature and a little despondent. This interplay of kindness and light, mixed with depth and sincerity is really wonderful.

I was excited to see Hexmere purely because I am drawn to bands with Hex in the title. (NB: Any genius want to name their band Four Hex Gold? DM me @orlandofurious on instagram. TBH my girlfriend wrote this part @dreargh on Instagram). The first thing I noticed was how immaculate their set lists were: every letter square and italicised; 2 straight lines separating the 12 songs into 3 neat sections; and the date clearly framed by a box. Surely the architect of these insane set lists is a closet brain surgeon. Outside someone had told me they were really heavy and this proved to be true. The kind of heavy that makes the whole room and all of the people blur together. Measured. Cathartic. When the music stops there is a tangible feeling of dissipated tension. A musical exorcism. This undercurrent was maintained in their songs – some were rapid-fire, and some made time for dancing and pushing. There were a few songs where the bass player dropped their instrument to huddle into the crowd with a mic and growl. It was not macho or violent, but brutal and considered. I loved it.

I have seen Jive Canyon a couple of times now as part of the awesome BOOM VACUUM series at the Junk Bar. Their improvisational, bluegrass-y, jazz vibes added a different element to the lineup. They performed tonight as a duo. The guitarist manipulated loops, navigated elusive anti-riffs while creating a texture that was overall warm and calming. He was focussed, creating chords and retuning the guitar while the drummer rattled the kit and contributed frenetic syncopation. Not too loud and not too quiet. They were warmly appreciated by the crowd and clearly displayed a high level of technical training. Plus, I was impressed by the sheer conscientiousness of keeping a stopwatch in sight, to guarantee a finite end to the noodling, and subsequently, addressing a general anxiety I have while watching improvisation. Cheers, boys!

Recognising the calmed, weariness of the dwindling crowd, Glen Schenau plugged in quick. His backing tracks were made of rumbling guitars and driving junkyard drums. He sang over them in a New York croon and a Manchester taunt, adjusting his Brisbane stance as though thrusting against a Goondiwindi hurricane. He did 3 songs and got howled into an encore which ended up being a karaoke version of Break Stuff by Limp Bizkit.