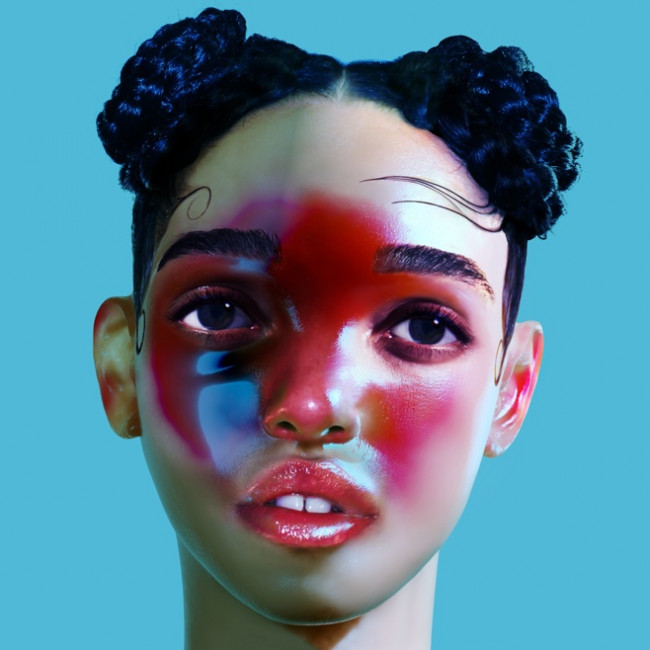 Just nod your head and give up

Well, that’s not yr run-of-the-mill portrait, is it? When I first saw it, I though surely I was looking at some porcelain doll.

FKA Twigs’ LP doesn’t open like a run-of-the-mill R&B album, either. The first 30 seconds of LP1 steal in like sunlight from above, a choir from a higher realm, soon to be snatched by a gnarly hand and shrouded in dense grey clouds. Mind, in order to form that sentence, I had to spin “Preface” at least three times. And each time triggers a new rapture.

Christ. Drive with this sucker – its slow blooms of ink, yawning chasms, trap rhythms skipping and sputtering away, and FKA whispering and wooing in yr ears – and the world will unfold in kaleidoscopic shapes before you. So many cliffs. So many moments where you’re buffed to an edge, and then reeled in, and then drawn back to the edge again by a gravitational pull completely outside your control.

Oh, yes. This is the moon to me. A woozy dubby bass twists through “Video Girl”, wrings itself like a sopping wet towel, drips pure menace over FKA’s sublime vocals. And yet that chorus: “Is she the girl from the video? / You’re lying, you’re lying, you lie.” Sometimes “girl” sounds like “ghost”, and the possibilities swim around in your head. And “Lights On”? That glitch-ridden, slow-burning blue flame marbled with stand-up bass, with echoes of “When I trust you, we could do it with the lights on”? Is that a bedroom? No, this is alien territory.

No doubt the production rends this space so ghastly – whoever’s at the boards has stripped this bare with a passion, peeling garments back slowly, fingers lingering on the corner of a certain effect before lifting it gently from view. But is it just the staggering drops and staggered beats on “Hours” that contort FKA’s “I could kiss you for hours” refrain from pillow talk into death threats? No – it’s her, too, fluttering high and dipping low with the grace of a hawk into the sluggish static sea. Same with “Numbers” – icy ringing slips down this one like sweat down the spine, but to hear the tiny pants, the question – “was I just a number to you?” – implored against the frigid backdrop…that lingers.

“Pendulum” veers into the supernatural at 3’13”, in spite of the sultry guitar that nudges parts of it on like a 30-yr old come-on.

Well, OK – there’s no real supernatural activity here, just smoke and mirrors (albeit top-of-the-line smoke and mirrors, vastly superior to most) that multiply FKA and project her in holographic form over our heads like angels. And, to an extent, “Closer” (which is not the last track, by the by) relies almost too heavily on such FKA-rendering – but then, every album needs a breather, don’t it, and the Twig choir from high ease long enough from the paranoia of “Numbers” to lull us into “Give Up”, which is…oooooh. Self-explanatory, to say the least. The refrain crushes me every time. Yes, I’ll give in. Just take me under. Wherever you want me.

Again. I tell you, I’ve seen dubstep, and I’ve been to its borderlands (Actress to the south, Burial to the north) but not enough to recognize this landscape. Are we on a new frontier? And is the rest of this world as dew-laden and verdant as “Kicks”, the actual closer? The fruits dangle low – very low. Touch it. Bite it. Tiny little nibbles. Savor it. Let the juice dribble down your legs.