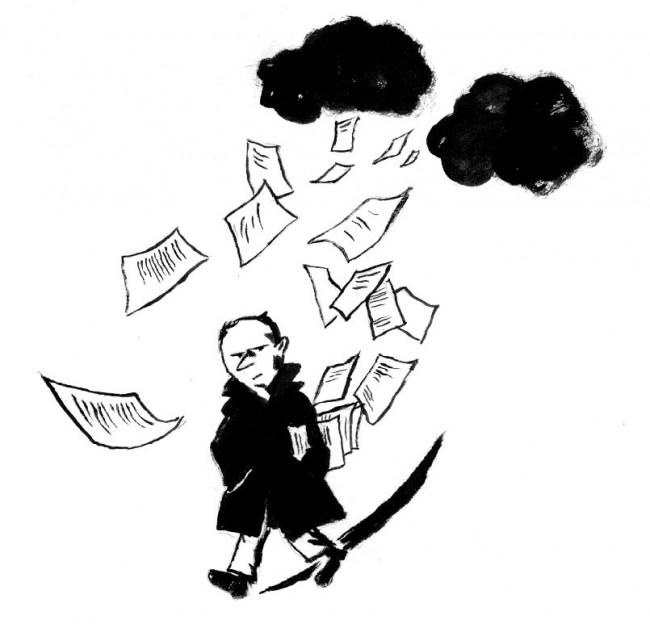 At the start of this year, I started a Tumblr blog and began posting recollections there – half-remembered, faceless – of events that had happened to me in the past. My friend Vincent Vanoli drew some wonderful illustrations to accompany the vignettes – being French, occasionally a word would become lost in the translation but that added to his insight. I left these stories up for seven days and then took them down again: I wanted to associate value with them and it seemed to me a limited time frame is one of the few ways to do that in web 2.0 environments.The value certainly won’t be monetary (not necessarily “can’t be”, but I still haven’t explored that avenue yet). The only stipulations associated to the posts was that they should be directly linked to music, and not explicit in revealing names (I wanted to see if they could stand alone). I wrote – and Vincent illustrated – around 90 of them, and jotted down ideas for another 150. I wasn’t sure where I was going with it: perhaps to collect a book out of the finished project. I liked (and still like) the idea of non-linear narratives particularly when it comes to autobiographical forms. They seem more accurate, authentic to me, inasmuch as memory does not travel along a linear path.

Around two-thirds of the way through, I began reprinting random selections of old writing that I felt were relevant. I couldn’t work out whether I was missing the plot there, or whether that made it more ‘authentic’.

I suggested to friends and readers on Facebook and Twitter that if they liked this idea and wanted to encourage me they could donate to the project via Paypal (ramonesfan79@yahoo.co.uk is my handle). Several did, maybe a dozen: I feel very humbled by their support and it meant a great deal to me but in the end I was overwhelmed by the indifference this project generated and so I stopped.

There is one final ‘complete’ post (with an illustration from Vincent) that I never published, and so on Australian Father’s Day I would like to. (I was going to publish the story of the saddest train journey I ever took but that one has no illustration. Also, we’re starting to move into ethical territory here.) It’s the ‘editorial’ from the fourth issue of my self-published fanzine, written in 1985 when I was still substituting exclamation marks for punctuation. (In the end of year writer’s poll that year in NME, a couple of writers identified “exclamation marks” as what they hated most about the year.) Recently, Jake Cleland called me “the greatest zinester without a zine” (nice pun). Stuff like this doesn’t leave you. I guess I’m more transparent then I sometimes wish to believe.

“Everett is a tough boy, wild and innocent and dangerous as hell. The most dangerous music writer alive” – Cleland, 2014

If anyone is still interested in this project perhaps they could show their interest by making a donation – however small – to my Paypal account, or perhaps suggesting a publisher. Otherwise these writings will stay unfinished and unseen like my Daniel Johnston book.

The love, the feel, the joy, the understanding of music – when the sweat’s trickling around your neck and your skull is splitting in two and you want nothing more than to storm on homewards and slap a record on LOUD… hey! the Ramones! the Marychain! the Membranes! the Saints! the Age Of Chance!… or furiously desperately spasmodically dancing jostling swinging – I name it, you haven’t got it… or when the lull breaks and companions have nothing better to do than smear your name around around around (or watch that infernal god-box, sucking churning second-hand emotion – experience only through alcohol, drugs or tv – which is more real for you: subjective or objective reality? Think.)… Mo Tucker! The Pastels! (categories are always well dodgy – I’d swap my arm and a leg for some collective rheotoric. Become fashion conscious – ig/nore it!) The revitalised Mekons! The Nightingales! (LIVE – THINK!) If you have nothing to say – say nothing… uplifting, inspiring, stimulating. A proud beating heart – try collecting stimulae to create a fragmented (w)hole.

A note written some time ago quotes this statement at me: – “simply because I often write when depressed doesn’t make me particularly brave or profound – I simply write out of need, out of excitement, out of sorrow, out of anger, out of WANT. Maybe I’m simply stupid – it’s not braver to be honest when down then when I’m buoyant. Maybe I should stop fighting the grain.” Not sure what the note means, though. NO EDITING HERE BECAUSE THIS IS WHAT I’M DELIBERATELY AIMING AT – AN INCOHERENT MESS SOMETIMES, BUT THROW ENOUGH MUD AT THE WALL AND MAYBE SOME OF IT WILL STICK.