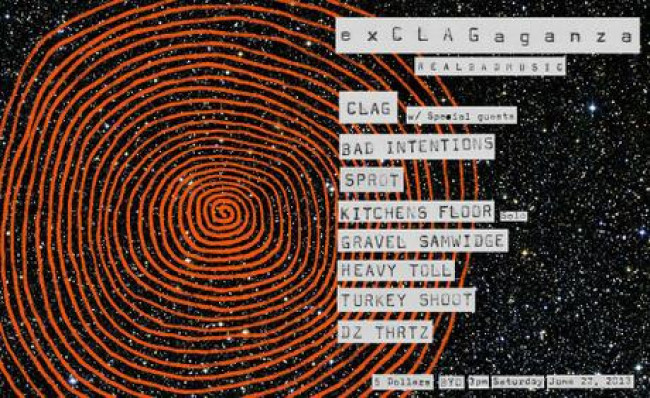 Leaving for the night’s tantalising festivities from my local hood an hour late due to a rushed journey to the neighbourhood dog park would have been bad enough, without having it compacted by a stupidly oversized miscellaneous sports code event. Inadvertently wearing all red (the opposing team’s main identifier) I surprisingly mis the forced chitchat and implication of which side I “support” from strangers on the street/inbound to city bus and make it out to Moorooka without incident, apart from the reg’ accusation by men in tight pink shirts and gelled hair that I should get a haircut.

Deciding not to publicly urinate at the train station, I cross the bridge and march up the stairs with my plastic bag of alcohol, through the resonating feedback and chipped wooden door of Real Bad Music, Moorooka coldspot and dirge music mecca, home to many with or without homes, only to discover I’ve already missed a few personally anticipated acts, namely Turkey Shoot (later emphasised by the people as “fucking great”). I am then distracted by Gravel Samwidge drummer Sleepy’s home-made colour-based video game. After a few satisfying minutes of play, and a cigarette, it’s time for the first of three sets by The Legend! The first is a discordant adventure that flows in and out of realism and ultra-realism with its down-and-out delivery, partial guitar and rather complimenting violin, with repeated musings around Flipper playing on the car stereo. The second outing evolves further, with a few more musicians and resonates even more throughout the venue’s partial walls, and the third outing, despite sober, is quite the affair with a number of musicians and a husky delivery that’s somewhat more harsh in its tone as opposed to the meandering long drive of the first. As a whole it’s cohesive, and (first pun)… legendary!

Then comes Gravel Samwidge, tonight featuring Sewers mouth Shan Corrigan on a rather impressive improv guitar. The band has been kicking it for a while and no doubt have played good shows and, as pathetic as this reads as a lead in, tonight is another one. ‘Tell Mum’ has been universally dubbed as “fucking great”, as are the new songs this evening.

A mic is duct-taped to a piece of wood. The Kitchen’s Floor set is noticeably devoid of stand-up comedy, despite rumours of crumpet jokes, but it’s a solid solo outing, the general drunken vibe (from the audience) generating requests, jokes, praise and just about everything in between as Kennedy sits nonchalant in his chair, beginning each track with a up-and-down strike of the strings. The tracks and set choice don’t necessarily break down barriers but it’s worth waiting till the end before walking across the stage as part of the only route to take a lingering piss.

Further cigarettes and drink X follow then comes Clag, who haven’t played a show together in quite some time. Tonight’s incarnation isn’t comprised of all the reg’ members, Glen (Callinan) Schneau takes up drums along with Marisa Allen (reprising her role on violin from earlier in the ‘eve with The Legend!) and Muchael Bouwman (etc. and what an etc!). Despite this set originally being billed as acoustic, it is very much not, with vocalist Bek Moore simply belting out each number. Now, by this stage of the night, blood alcohol levels read more like a bowling score sheet, reflected in a number of no-ended heckles by a loud boisterous groupie while some of the more younger members of tonight’s crowd take to doing intellectual things such as moshin’ on the real estate sign floor followed by a cod-hanging with Christmas lights. Still, by the end, the set is a blitzkrieg, heightened by the track that has no doubt sent Harry’s Fine Foods in Paddington a lot of business; ‘Chips And Gravy’. The track in question is by no means a personal favourite, but tonight’s painfully lo-fi and loud delivery turn it into a habitat-friendly hit and the highlight of the set.

Some people come and some people go following Clag, but for those that stay are treated to the noise master-work of Sprot. Real Bad CEO Matt Earle leads the sonically intriguing charge, manipulating effects and banging random objects, evolving into a sea of destruction of the drum kit… which by no means stops production. The set itself recalls both industrial music and Krautrock, mainly because of the effects-heavy baselines and rhythm. It goes on a while, but ends too soon: it’s a personal “fucking great” set of the night. Heavy Toll wrap up proceedings and they’re a sleek, sexy affair, with Dusty Anastassiou’ deep Julian Cassablancas-style longing voice turns the place into a late-night sex club without the sex.

Real Bad provides quality music, quality folk and good times. It is a realm that excels within a town that at the best of times fails to work upon its strengths as a musical community. If only Translink realised this and gave it more attention than sporting event X,Y,Z  then the world would be a more perfect place and cab drivers would be getting  less undeserved cash driving us back into the cold hard reality of life.