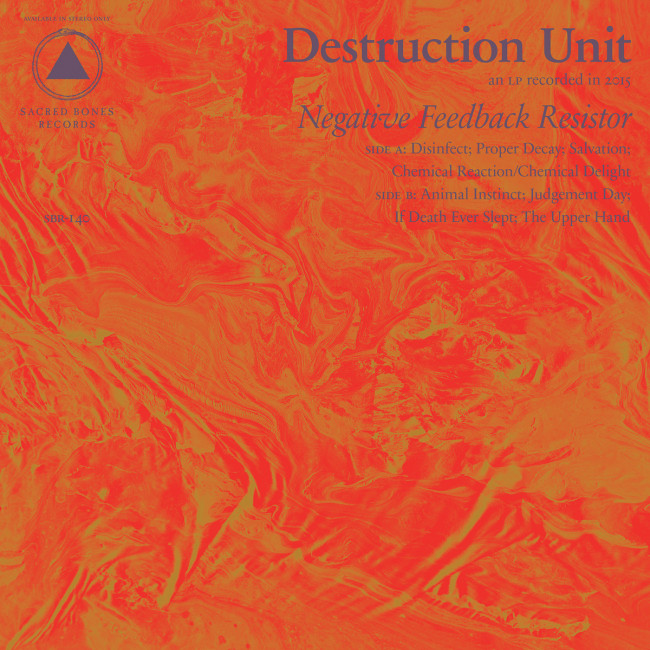 You know what’s not nasty? The new Destruction Unit LP. Yeah, you heard me. I really wanted to be rocked, shaken, battered, bruised – but Negative Feedback Resistor is just boilerplate hardcore punk. No politics, no perspectives, no emotional depth at all. All I see/hear is this amoeba of noise and echo, magma dripping fast down the volcano’s side – and y’know, magma is cool-looking and all that, but imagine if you were trapped atop a rock and had to watch it drip past you for 50 minutes. You’d get bored, right? Right. That’s Destruction Unit.

The problem is, the band have deluded themselves into believing that they’re some unique artsy death mob. They do these clever tricks, like opening and closing the album on the same drifting blippy ambient void, and a bleeding segue from “Disinfect” to “Proper Decay” (get it? get it?…oh nevermind). But the heaving bulk in the middle boils down into a monochrome flurry of manic drums and muscular riffs, broken up by periodic slowdowns that should be all-too-familiar for Dischord fanatics, Albini gearheads, and DDT brats. So familiar, in fact, that the onslaught blurs the faces behind the carnage – which may be what the blokes want, but then the toxic oomph of songs like “Judgment Day” fizzes out into a throbbing headache.

And besides, punk with ambient sections? Sorry, lads – Muuy Biien of Athens beat ya to it last year, and they’re way catchier. What’s that? Sludge and catastrophic wailing saxophone? Sorry, Backwards from Birmingham (UK, not Alabama) beat ya there, too, and they’re way further down in the sludge than you. Like, you’re knee-deep on “Animal Instinct”; they’re up to their armpits for a whole EP. That is one of the more direct gut-punchers, though, along with the diabolical Motörhead sucker punch “If Death Ever Slept”. OH MAH GAWD, that one does rule.

But really, we do need to talk about this whole “psychedelic” tag. So ribbony swathes of wah-wah in the middle of mostly metal bruisers invoke mind-altering states, eh. Look, I dunno what gets you off into alternate dimensions, but the mess at the end of “The Upper Hand” is just the cherry atop your great big sundae of conceit. (…OK, sorry, that’s a fucking awful metaphor. See what DU do to me.) You’re not Hawkwind, no matter how bad you wanna be. Not until you have something more novel to say. Right now, I don’t even know what you’re saying. Growl, growl, power, chemicals, survival, fucking dead, growl.

I could tell you about “Chemical Reaction / Chemical Delight”, but this is Collapse Board, and so I’d rather not. If you must know, it’s something like everything else on the album, all squashed together and stretched out and chewed up and spat out. The first few times, it sounds amazing. But these days, it just pounds my head in – and not in that funny, cartoon-y way. It hurts so bad that I want to strangle someone. Anyone. Especially the cruel savages who laugh as I wince. They do not feel. They only do.

Hey, I’m not bitter, me. Not bitter at all. I never ever curl up on my couch and cry and moan for half an hour, or stare at my legs five minutes and squeeze hives, or curse at politicians and government workers that hate people in the rare occasion that I see a TV screen. No, not me. Because I’m in Destruction Unit and we only care about sex and chemicals and death. Because that’s what all the other noise bands do. Because that’s the REAL BAD stuff.