Couples Counseling and the future of feeling good about feeling weird 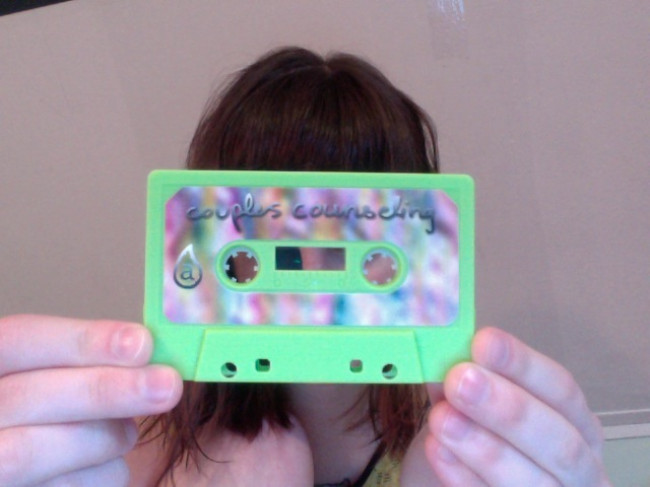 The SP404 is the acoustic guitar of the 21st century, but it’s okay that people haven’t fully embraced it yet; people were still fiddling around with music hall clarinets and jaunty filligrees on the player piano this time a hundred years ago, so anyone playing ‘Wonderwall’ in a pub right now can’t be blamed for being the diplodocus moseying around the grassland not keeping an eye to the sky. Watching someone r e a l l y sing and express their Selves with a sampler – as opposed to the entertaining but very superficial buttonpushin’ 3D hopscotch of someone like Daedelus – is like someone loomweaving a cloak out of their raw human matter and throwing it over the room. Buttons are pushed, neural pathways are triggered, the whole experience is immersive beyond whatever can be formed out of the pure friction of things brushed against strings.

As in life, the tiniest points of contact and touch become viscerally crucial, and the performer is as free to create the whole experience as they are to dance, which – as the revolution of Elvis’ hips proved, and fifty subsequent years of same have failed to totally dilute – is like BEYOND intoxicating if you’re playing and singing at the same time. Freed of having to obey the rhythms and structures inherited from decades of v-c-v-c guitar chord charts, songs wind and bend and split, and the voice is at once suspended within and cast over whatever emotional miasma is being conjured. The future of avant-songwriting is always to find new ways of discovering emotions that haven’t yet been unfurled, and to me, the sampler married to a songwriter is the closest thing we have to Fry’s holophonor in doing that, and the only way the world can catch up with Ian Crause’s brain. And Virginia de la Pozas (a.k.a. couples counseling) has the sampler on a string.

Watching her play in a tiny art gallery in Burlington is hard to explain, but I was starting to creep myself out by how spellbound I was by the whole thing. She played a bunch of songs that aren’t on her new tape which involved thick lounge jazz chords and another one called “Sad Choirs” which were fantastic, but the stuff which was on the tape (which I am now looking at the way one might a new pet hamster or a negative STD test) floored me then and is flooring me again now, so that’s what I’m going to talk about.

“hope u never hear this” wanders heartstruck and fulleyed through lyrics that might be embarrassing if they were sung over a strum (“i don’t know you/but I feel like I know you/let me get to know you/I’ll show you/that I’m the girl for you”), but amongst de la Pozas’ swirls and shudders, they feel like a fishing line thrown on a moonless night over a vacant lake. The repetitive fixation on the ‘you’ is almost kinda dumb-rendering heartbreaking, like the “you, you, youuuuuouo!” in “Hold Me Tight” by the Beatles or the “all for you”s in “Video Games” – the whole world narrows to a hopeful nub. It’s like “Thirteen” for people who use tumblr, and if that sounds disparaging, it’s not, because tumblr is today’s being crouched around Radio Lichtenstein under the covers in the 60s, so that means that this is exactly the song for 2014 if you want something and aren’t sure if you’re going to get it but you sure want to kiss it, and besides all that, the wanting itself is enough to fill you completely with something new and important.

“floating heads” is astonishing in navigating the landscape formed between two people who aren’t working out. There’s a piercing something in the lyrics just out of reach (“Sometimes I don’t like to touch”) underlined by the refrain of “stay and be my floating head/stay and let’s write songs in bed”; this is all about emotional disembodiment, to try and cut off a part from the whole to keep any of it intact, and the song is as gloriously sticky and caught-between as that awful feeling. Towards the end, Virginia rises through a seasick out-of-meter chorus of herself to try and settle at a point with herself, but all that squeezes out is a meek pitched-up chipmunk that insists “you’re the only one for me”. It’s convinced, but it’s not convincing.

All I know is that this is music exactly as real as it is beyond imagination. Emotional realism is a difficult concept to pin down, but there’s the same animating brilliance here as there is in “Back in Black”; form and matter are married here in a way that curls up inside your heart and shakes in the same way that AC/DC makes your brain burn. This is going to be a good century.