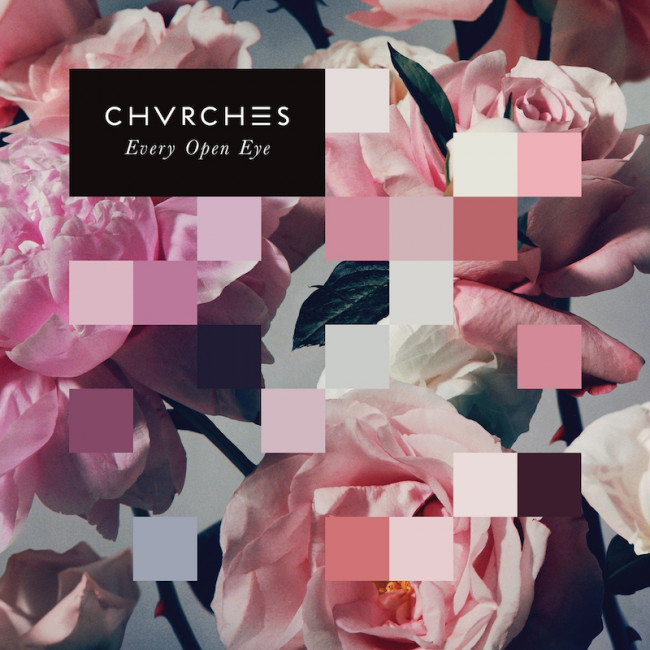 As a woman (!!!) writing about music in 2015, am I supposed to approve of all pop music now and its “pure” form of expression? Would I be a hypocrite to take any other stance? I mean, I don’t like Ryan Adams anymore than you do (fuck, I’d never even heard of him), but then I never bought 1989 in its original form, either.

I have a grudge against CHVRCHES. They’re not just pop – they’re synthpop, and that’s a storied history that I’m more versed in. The “Bela Lugosi’s Dead” cover that they hacked out a year ago epitomizes everything I hate about them – no suspense, no shadow, no restraint, no risk.

It’s too long, to start with. Fourteen tracks of identical song structures, with identical lengths, broaching identical confessions. It takes a force of will for me to convince myself that some change of pace from the borrowed OMD/Human League/Erasure hooks might await at the end – and admittedly, there is. The soft and shimmering, hushed ballad called “Afterglow” offers some respite from the typical overcrowded light shows elsewhere; “Follow You” also simmers as a rare techno ballad.

But otherwise, you have the charging verses, that lead to the canned climax, and [girl] filling every blank space with a totally unremarkable voice – and by that I don’t mean the kinda voice that sings under streetlamps waiting on the bus, or the coarse weary voice that greets ya from behind the counter. Just a voice that’s been fine-tuned to match industry standards of beauty, no more and no less. The guy’s voice sounds even more inhumanly perfect and suave, particularly on the sterile funk of “Never Enough To Carry You Over”.

Synthpop shouldn’t have to sound this backwards, as if the kids can’t escape a-Ha’s sketchbook romance. “Make Them Gold” shouldn’t make me feel old – but so it does, with that airbrushed wistful color scheme of Avalon that thousands have adapted by now.

I can’t see myself dancing to this. That’s an omen. Pop music should, at the very least, encourage motion in the moment, shut down those doubting pouting moods that pervade the static everyday and arouse desires long dormant (Shamir, for instance – ooh, he’s a hot mess). Even the catchiest songs on Every Open Eye can’t rouse a disgruntled dancer to move – not “Keep You By My Side” with its notalgic glimmer, not “Leave a Trace” and its sleek modern pop model.

What frustrates me the most about CHVRCHES, I think, is that they limit themselves by their own parameters. By subscribing to the popular conception of synthpop, they narrow their pallet to the key beats, sounds, and romantic topics that the listener can recognize, rather than jumping off a limb and going somewhere totally unexpected (like when Dave Gahan decided that Depeche Mode would be a tough leather rock gang and threw some gospel into “Songs of Faith and Devotion” – mind, I don’t totally approve of this deviation, but ANYWAY).

Maybe I’m just not into pop. Maybe I just can’t relate to the forced smiley front or the obsessive relationship analyses. Every normal woman, I’m sure, has these kinds of discussions all the time, about what the boy is doing wrong and how the girl shakes him off, or how she misses him and needs him back, and so forth. All I know is, CHVRCHES don’t incite me like Sky Ferreira, or excite me like Charlie XCX. Every Open Eye hits some peaks at the start and the end, but as a long player flattens out into a fleshless, squeaky set of uninspired pop.