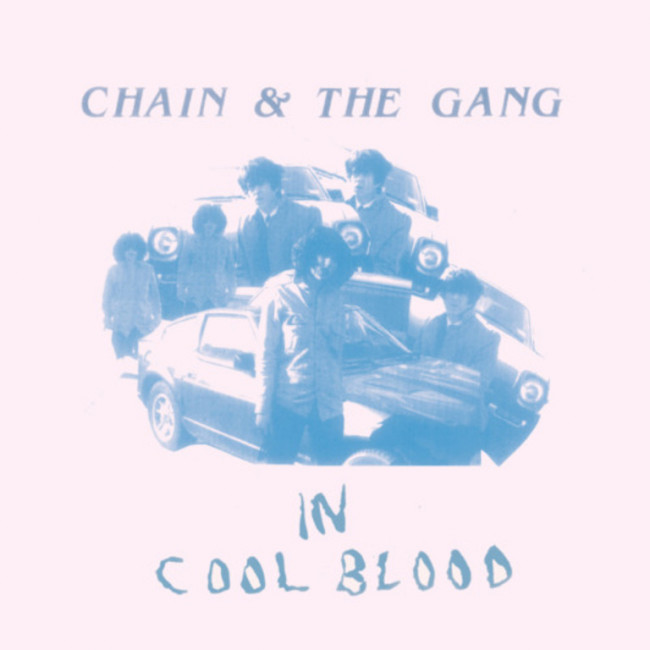 What’s cool?  Chain & The Gang’s new album, In Cool Blood (K Records), might help us to answer this question.

The band name: gangs are cool. In fact, Chain singer Ian Svenonius (formerly of Weird War, The Make-Up, Nation of Ulysses) argues in his books (The Psychic Soviet, Supernatural Strategies for Making A Rock And Roll Group) that the origin of rock‘n’roll groups can be traced back to juvenile street gangs of the early-to-mid 20th Century. Groups were an industrialised, commercial variant of these gangs, hired as the front-line of U.S. capitalism’s cultural advance and funded by the C.I.A. (like Pollock and Rothko) to infiltrate Europe’s threatening social democracies. But the rock‘n’roll group’s dangerous origins, its close connection with subcultures, and the avant-garde qualities that made it symbolic of ‘cultural freedom’ mean that it can still, despite everything, be a force for revolution. Revolution is cool.

The album title: classic ain’t necessarily cool, more like cold, but here the classic is re-purposed to change it (literally) from cold to cool. Likewise the album’s sound: the instruments of last century (guitar, bass, drums, human voice) playing styles from the peak of group culture (garage and doo-wop), recorded in “mono” to highlight their historical charm. So far, so classic, you might think. But by harnessing their wagon to those styles so close to the youth gang source, and by boiling ‘em down and playing ‘em straight with no fuss, the Gang get to the heart of the thing and find that it’s not totally cold – it’s still cool.

So the past is important.  Check out ‘Where Does All The Time Go?’: “Where does all the time go?/I found out where it goes to/It goes to a hole in the ground that I found/I want to go there with you”. The singer hopes to escape the square world by returning to an idealised past. This might be an instinctual response to capitalism’s culture of accelerating disposability. Later, he sings, “It got locked up/But I got a key/I can get some, just stick with me”. He can get to the past, and we can get there too, but only by following him. This makes him cool.

But what does he find there?

Certain kinds of trash aren’t around any more
You just don’t see ‘em
Oh, oh
…
Things like pop tops from a 12 ounce can…
Cigarette holders in coloured sand…
Pieces of magnetic tape caught in a tree
These are the things that I love to see
(‘Certain Kinds Of Trash’)

Some people sift through yesterday’s trash to find today’s cool treasures, like those artists who are at pains to stress that they found their copies of White Light/White Heat and Raw Power in ‘cut-out bins’. But Chain & The Gang go a step further, by celebrating the trash qua trash. Going a step further is cool.

Such one-upmanship suggests that being cool involves effort – and it does. A great deal of preparation goes into the apparent spontaneity of coolness; in fact, the more effortless the cool appears, the more hard work has been involved. Thus coolness is a more generous quality than is commonly imagined. It is as if cool people are throwing a surprise party for us, as the Gang remind us with their joyous song, ‘Surprise Party’.

Since cool doesn’t brag about this work ethic, it is often mistaken for a lack of interest – this is a fallacy. Chain & The Gang play on this confusion in their song, ‘I’m Not Interested (In Being Interested) Pt. I’ (next lyric: “…in something I’m not even interested in”). But note how often and urgently Katie Greer repeats this line.

She is very, very interested in letting you know how uninterested she is. This is because she is actually interested in herself and she wants you to be interested in her as well. As Svenonius sings in the bridge, “Why don’t they make a movie about me? Why don’t they make a book about me? Why don’t they put me in a magazine? Now that’s something I might actually read!” [Amen! I know the feeling – ET] By being ostensibly narcissistic, the cool person is actually giving a quality product – themselves – to the world. This point is important, as demonstrated by the Gang’s decision to basically repeat the same song with added piano, an important-sounding instrument (‘I’m Not Interested (In Being Interested) Pt. II’).

However, beneath this curt exterior dwells deep thought. Chain & The Gang reference philosophy with the song, ‘I Don’t Believe In Free Will’ (next lyric: “…I just do what I feel”). The philosophical issue that most interests cool people is the mind/body dichotomy. Combining intellectualism with a love for the pleasures of the flesh is a difficult, but necessary, combination: “I got legs I can walk to you/I got arms I can hold you too/(etc)/But it’s a shame/It’s a shame, it’s a shame (x 2)/Yeah it’s a shame/If I only had a brain/I need a brain, man!” (‘If I Only Had A Brain’).

Accordingly, despite the animalistic paeans we expect from rock‘n’roll (‘Hunting For You’, ‘(In the) Panther’s Cage’), there remains an air of detachment: they are, after all, in “cool” blood. The most sexually explicit song on this album is ‘Heavy Breathing’, a lurid celebration of the classic telephone move. “It’s my favourite thing,” froths Svenonius – but wait, really? Does he really like teasing better than fulfilment, foreplay better than sex? You might have looked at cool people and wondered whether they actually have sex and, if so, how. What would they look like without the clothes? What would happen to his hair product? Her makeup? You might even conclude that cool people don’t have sex (this would explain why there are no cool parents). But this song has a deeper meaning: that it is more important to celebrate wanting and striving than to spend our lives looking back on successes we’ve already achieved.

So Chain & The Gang succeed by grasping an element of cool that is too often missed: action. Action is why Che Guevara, a man with a patchy beard and army fatigues, is considered cooler than hipsters with far better grooming and dress sense (it is also why the revolution that he led was successful). “The times we’re living in are dangerous,” announces Svenonius, “you’d better find yourself something to do” (‘You Better Find Something To Do’). “Hold me tight, love me every single day and night,” is another way of saying “carpe diem”, just like all the tricks of coolness that we’ve discussed are simply ways of trying to circumvent what gets between us and life. In the end, the cool person wants only to live. This album is good for dancing.

(Note: while this has all been educated conjecture, it is conjecture nonetheless. If there is one thing as important to the cool person as being understood, it is not being understood. The final, title track of the album (‘In Cool Blood’) makes this point by garbling its lyrics through retro-futuristic effects units. We have painstakingly analysed these lyrics and found them to be repetitions of the album title and the words, “The new album by Chain and the Gang”. Some things are simpler than they seem.)