Cassette of the Week #6 – TOBACCO 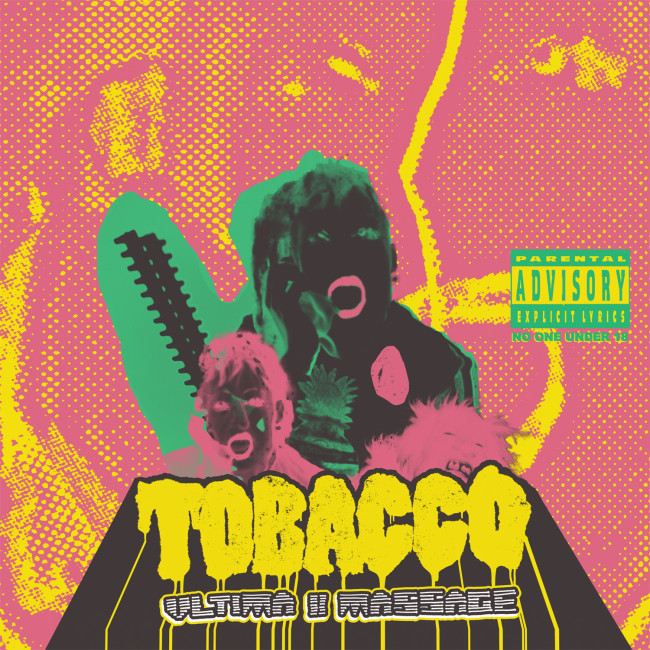 Back in my diagnosis/review of Young Magic, I denounced synths (or, rather, the dull-witted folk that don’t abuse them) as instruments of cool, as anesthetics for the youth that reminisce about a decade they weren’t even born in.

But behind that shimmery veneer of glass, every once in a while, someone sneaks up with a hacksaw.

In spite of the familiar beats and laser-lit atmosphere, TOBACCO’s Ultima II Massage still bedazzles me senseless, like a thug in a bubblegum pink leather jacket with a sequin-studded switchblade. On the one hand, he could fuck you up. Big time. Join him, though, and he’ll lead you to the gang’s secret hideout, within some eyesore of an old building, where a busted disco ball hangs overhead and the house band is mangling strange toxic sound from equipment so wrecked and wrong-looking that they couldn’t have been bought legally.

And if that sounds like the biggest cheese cliché you’ve ever heard, then GOOD. TOBACCO thrive on the cheese. Velveeta, baby, and big slabs of it. Velveeta like honeyed ambrosia.

Now, you could pick just about any track on here and twist your guts into a tie-dye, but “Eruption” baffles me the most. “Twist it like a dream team, / I can make your heart heal.” Oh, let’s not kid ourselves – of course it’s the thinnest euphemism ever for masturbation. Of course. The gratuitous use of the word “fuck” makes that really fuckin’ obvious. But what’s this acoustic break? How is this so catchy? And is it really just the hair he’s referring to when he says “in six more months you can be like her”? Makes ya think of a pop single on vinyl left in the sun, so it warps and cracks and the label fades to yellow.

As vivid as Ultima sounds, and as much as the thuggish beats pound, the composition of the thing is deceptively sparse. Hard to feel that on bangers like “Face Breakout” and “Blow Your Heart”. Especially the latter – can we say Jean-Michele Jarre soaked in acid and animated by the noxious vapors of the diesel-fueled drum kit? But tune yr ear to the delicate decay of “Creaming for Beginners” and you’ll hear a style truly depraved, a ragged emaciated thing, that gasps often for breath, leaving taut gaps in the track.

This sickened fatigue infects “Omen Classic” even more, an asthmatic corrosive virus that can cause asphyxiation – and certainly will when imbibed in conjunction with “Pool City, McKnight Road”, which reminds me the most of that sublime Micachu and the Shapes LP from 2012 in its screechy damaged synth sound. A vampiric new wave rave, you could say. But not Stoker Bramwell vampiric – we’re talkin’ Hammer-style pulp.

Anywho, what better way to purvey this contraband of street-battered electroica than the cassette, itself a flawed vehicle for consuming audio? Sure, Ghostly offers a splattered vinyl version that suits ULTIMA well – and, no doubt, the inevitable pops and cracks that follow would complement this as Orange Crush complements theater-style popcorn. But come now, why lug out that high-fidelity treatment when you can have an object as cheap and plastic as the music itself – and that’s not an insult, but a bona fide selling point.