Cassette of the Week #5 – White Poppy 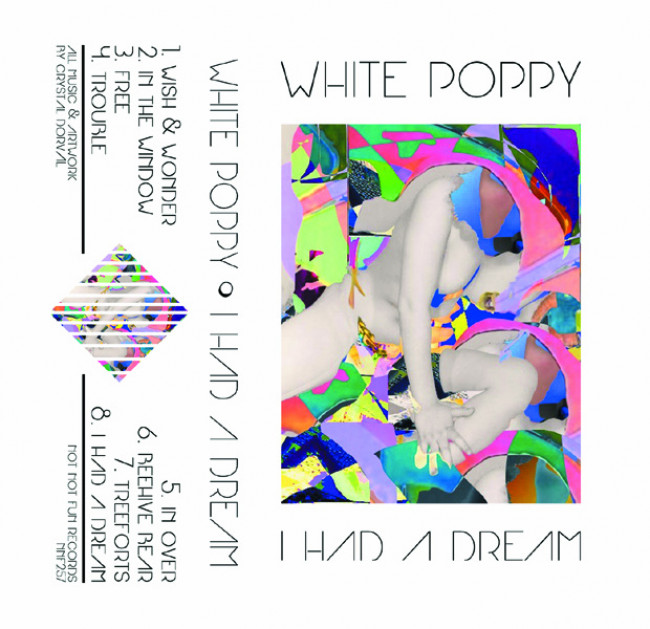 (Well, actually, if you want to be politically correct about it, this is actually the cassette of last month, but Gold Flake Paint wouldn’t have it. But you don’t mind, do you? Of course you don’t.)

There’s a shadowy past oft forgotten by post-punk auteurs, a gray zone of specters and light in a hazy balance. A realm of great space and distance, far more than the rushed, jungle-crazed club-bound youth will allow, and a faint warmth that lessens the gloom of a rainy day yet suits it perfectly. On this tape, soloist Crystal Dorval, aka White Poppy, has pulled back the black curtains and unlocked this serene land for today’s misguided souls.

I Had A Dream is a dream of a cassette, the kind of album that embraces the soft hiss in its lofty opal gables. Though ambient, a calm but steady force – like the rolling bass and measured snare strokes of “In The Window”, or the unassuming groove of “Beehive Bear” – guides the airy melody to its target. The deeper undertones of “Free” evoke the lighter side of Crispy Ambulance – no doubt “Simon’s Ghost” drifts over this one. Guitar lines shimmer in and out, sometimes tumbling like rippling brooks and fragments of Durutti Column; other times, in the widest of wide spaces “Trouble”, a haze warbles and shrouds the center.

Over this great void, White Poppy floats over all. Her voice has expanded to encompass the skies and the sea, the stars and the clouds. At times she has tucked herself in the eaves of the chamber – in the spirited ascent of “Tree Forts”, for instance, she is only the faintest glaze behind the cavern-crystalline surge. But on opener “Wish and Wonder”, the enigma of her voice overflows across the harsh lead beat, billowing ever upward to the highest beams of the cathedral.

Oh, yes – of course I recommend I Had A Dream. Not just as a collection of tunes, but the physical tape itself, for the rare mix of bliss and determination that such a thing can fill the car with on morning drives. Serenity without set borders or definitions, unfettered by concrete terms and pop song structure. Passion without the petty details of human beings. The cassette’s only flaw is its length – with roughly 15 minutes on each side, both ends trail off into voids that stretch way longer than they ought to. Nevertheless, what a gorgeous sparkling ice tower of a tape.