Calexico – The Thread That Keeps Us (Spunk) 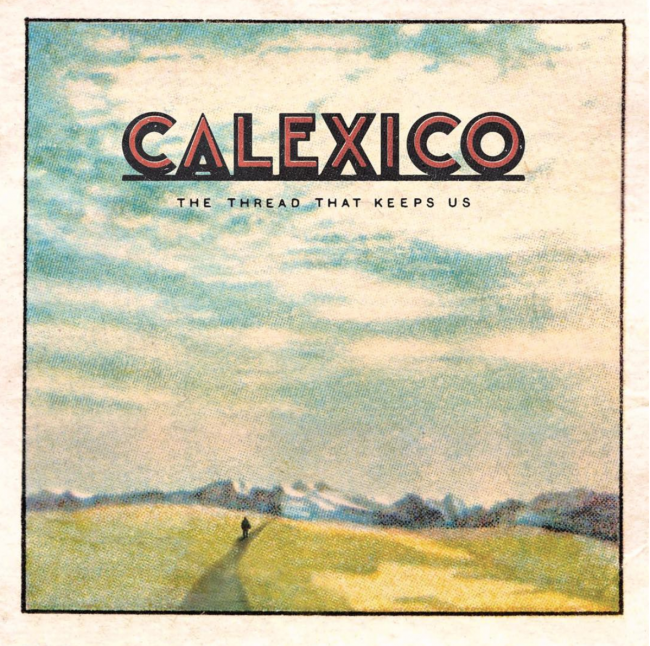 Yeah, so I’m a self-confessed Calexico groupie. Have been since first seeing them support Nick Cave & the Bad Seeds at Melbourne’s Sidney Myer Music Bowl in 2003, touring their much revered album, Feast of Wire (2003). My mate Ross burnt Hot Rail (2000) for me soon after and I became hooked to their unique sound. They’re tricky to pigeonhole – and why should we even try – but various labels include Americana, Desert Noir, Southwestern, Border, Indie Rock, Folk Rock, Alt-Country, Tex-Mex, World, Latin, Mariachi. Somehow they are all of the above. They collaborate so frequently and have employed so many sessional members, their sound is in constant evolution and every album is like a delectable chocolate assortment.

Writers, musicians and artists, we’re all storytellers at heart, but some are more proficient than others, Calexico being a band in point. The new album, The Thread That Keeps Us (Spunk) is a heartfelt story written during a reconnaissance to northern California, where founding duo, Joey Burns (vocals, guitar) and John Convertino (drums, percussion) first met in 1989 and began playing and recording together. The Thread… is Calexico’s ninth studio album and offers a captivating collection that sees them revisit their musical youth and inspirations. The fifteen new tracks constitute a slight digression from their previous sound. The nostalgia of old haunts, favourite bands and the importance of family appear to be the so-called ‘Thread’, but the album is simultaneously a lament for the current world climate, both political and environmental. This is reflected in a more chaotic and raw sound than the musical prowess and tight production of previous albums (and I’m not saying say this isn’t an accomplished record).

I’ve watched this album come to fruition over the past year, as Burns is a regular on Instagram and has engaged generously and deeply with fans. We’ve hung around for the ride, seeing the album through from conception to due date on 26  January 2018. Through a myriad of photos and videos, we’ve been privy to their songwriting retreat in California, their jamming and recording in Convertino’s funky Texan home, and recording and mixing in the band’s own Wavelab Studio in Tucson, Arizona. After this insightful build, and having met the guys on a couple of occasions, I’m fortunate to have received the album pre-release – for me, an early Christmas gift.

Opening track, ‘End Of The World With You’, is pure pop, all rhythmic jangly guitar that becomes wilder as the song progresses. It’s impossible not to sing along after a first listen. The track is perfect for playing loud in the car with the windows down. In the official video clip a drone’s eye view emphasises the sweeping feel of the song, a story of hope and ‘love in the age of the extremes…’. You glide over human-tainted landscape that provides a strong metaphor for the political desolation the band have described feeling. Is the song a homage to R.E.M.’S ‘End of the world as we know it’? Perhaps, but the similarities are only in theme and this fangirl’s admiration of both bands.

From the outset, this album brings out an edgier side of Burns, his vocals grittier, his guitar more frenetic. It feels like he’s getting back to bashing out songs in the garage with his mates. It’s more experimental, and while one reviewer has described the album as ‘interesting yet disjointed’,  I find it a tribute to their breadth of experience and having the courage to push a whole stack of eclectic musical boundaries. Burns has talked about bands he grew up on, and those influences come out, for example, in the wailing Pixies guitar sound of ‘Eyes Wide Awake’. You’d be forgiven for confusing the vocals on 60s garage punk ‘Dead in the Water’ for Lux Interior of The Cramps, a vastly different voice for Burns. Being of a similar generation, I love this stuff and to me, it makes perfect sense considering their 80s and 90s musical roots.

‘Flores y Tamales’ is surprisingly the only latin track this time, with guitarist, Jairo Zavala, providing lead vocals. It’s a cumbia style groove and given the catchiness of the song, and Zavala’s charismatic stage presence, it’s almost predestined to be a favourite at their gigs.

For me, the highlight of the album is the sublime ‘Thrown to the Wild’, a broody slow-build reminiscent of ‘All Systems Red’ (2006) or ‘World Undone’ (2015). Haunting, deeply moving, lush and layered, but altogether too short. I can’t get it out of my psyche, nor do I wish to. The humming refrain, Convertino’s characteristic light and dark percussion, and eerie madness of the trumpet somewhere in the distance. It’s so good. So good.

These guys are seriously talented. On most albums Burns plays no less than ten instruments. Convertino’s drums and percussion are unmistakable – quintessential to the whole Calexico sound. In The Thread that Keeps Us they’ve produced another beauty and I’ll be only one of the many willing them to return to play in Australia again as soon as possible.