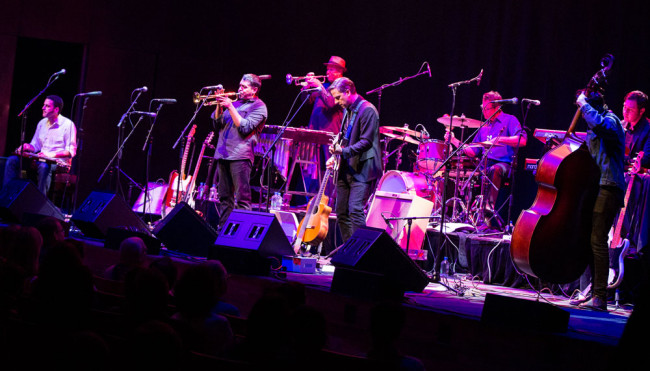 Firm Melbourne favourites, Calexico, have toured Australia four times over the last twelve years and this year they bring a seven-piece outfit from Tucson, Arizona to promote their eighth album, 2015’s Edge of the Sun.

Their first concert is at Melbourne’s Hamer Hall, with the crowd a dichotomy of die-hard fans and Arts Centre members interested to hear Calexico’s music in this select auditorium.  When they emerge the band are reverent to Hamer Hall, which is well-suited to their full sound that includes guitar, trumpet, drum, pedal steel, double bass, piano accordion, synthesiser and vibraphone. The band-members effortlessly change between instruments and styles, from Americana to rock, alt-country to latino.

Expansive western-themed instrumentals fill the auditorium, most hailing from early albums The Black Light and Feast of Wire. Close your eyes and you will be in Arizona; think a desolate highway beneath the silhouette of a sculpted mesa.

Frontman, Joey Burns, gives an impressive vocal performance despite suffering a ‘Tucson virus’. He still manages to melt the collective heart with his songs. Drummer, John Convertino, keeps the spine of the music tight, but adds his trademark brushes and flourishes.

Highlights include new songs ‘Falling from the Sky’ and ‘Bullets & Rocks’. Old favourites ‘Black Heart’ and ‘Crystal Frontier’ never fail to please. More than a few audience members want to dance in the aisles to Cumbia de Donde.  Burns and Jacob Valenzuela (trumpet and vocals) urge the audience to participate with handclaps and ‘hey-heys’.

The concert finishes with ‘Guero Canelo’ and more rousing audience participation. There’s a lot of love in the room when the band take their collective bow.

Needless to say, I want more.

Thankfully I have tickets to see them again in two days time at Meeniyan, a small town in South Gippsland.
It’s a hot evening and the Meeniyan Town Hall shines gold in the waning sunset. Moody storm clouds and distant rolls of thunder provide the perfect ambience for Calexico’s music.

Patrons are squeezed around trestle tables topped by blue-and–white tablecloths. They’ve brought picnic dinners and eskies full of icy drinks. Everybody will drink double their intentions because it’s so hot.

If the day itself and the town hall are not hot enough, Calexico are blazing. The band hit the smaller crimson-draped stage with their indefatigable energy. The haunting ‘Gypsy’s Curse’ emerges from their sound-check, followed by a stirring rendition of ‘Falling from the Sky’. Burns’s voice has recovered somewhat from the virus and the crowd sing along with him.

Burns is hot as a habanero in his red shirt. He lights up the stage with heartfelt vocals and lyrical guitar-playing. The set differs slightly from Hamer Hall’s with more instrumentals and Valenzuela on vocals to ease Burns’s workload.

Calexico are full of enthusiasm and the crowd feed off it. By the end, the crowd stamp, whistle and cat-call for an encore and Burns returns for a beguiling acoustic version of ‘Fortune Teller’. The band rejoin him and after the raucous ‘Corona’ and finale, ‘Guero Canelo’, the party is all over.

It’s going to be a long three years wait for Calexico to return.