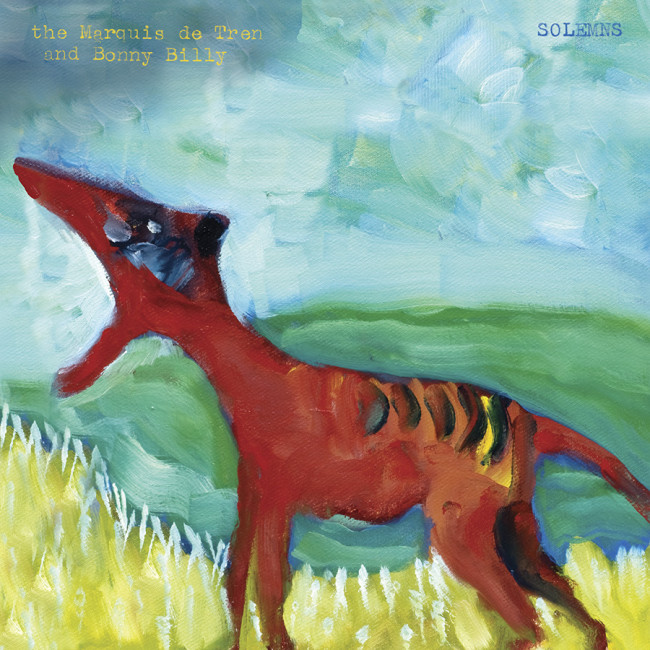 This limited edition 12” with a picture etched on one side (sadly the review copy was a download) features Mick Turner (the Marquis de Tren) on guitar and cover art, Jim White on drums, Will Oldham on vocals, and his band, the Bonny Gang, chiming in from time to time.

If you haven’t been blessed with Turner’s solo work, or his collaborations with his Tren Brother Jim White, you might recognise the duo as two of the incomparable Dirty Three or as the main backers on Cat Power’s Moon Pix (1998). These masterly musicians are in top form here, ambling arm-in-arm and conversing as only decades of friendship allows. It’s much more driving than the wispy Get On Jolly (2000), the last Tren/Oldham collab, which isn’t saying a lot – that record was mainly percussionless and remains one of the best lazy-arvo tea-and-cake soundtracks – but these pieces are much more clearly “songs”.  In fact, do you like Moon Pix?  ‘Solemn 119’, the third and final song on Solemns, sounds just like Moon Pix.  That is, until Will Oldham’s voice comes in, singing what could be the inner monologue of a suicide bomber.

For ‘Solemn 119’ is actually Psalm 119.  Indeed all three songs here are psalms, as in the classic hymns from the Old Testament and the Talmud.  There are some great numbers among the psalms, and Oldham is following in the footsteps of Boney M, U2 and Coolio’s adaptations to the pop music world. “The Lord is My Shepherd” is a particularly pleasant psalm you might know.  Oldham, however, seems to have picked the three most self-righteous and violent psalms he could find, the ones which say in short: “I’m a good guy, God, and I’m doing everything just like you said, but look at all these evil guys that just go around enjoying themselves. I hate these guys, can’t you smite them? Smite them GOOD?”

Not a lot of people know – I didn’t know ’til just now – that the lyrics of Get On Jolly were paraphrased from another public domain book of poetry, Rabindranath Tagore’s Gitanjali (1913).  The vibe was reflective and peaceful.  Apparently, the increased intensity of this new set of music demanded an equally weighty source, hence King David’s greatest hits put through the Bonnie filter.  It’s undeniably a natural fit, although it is certainly strange at first to hear words like:

…from the man who sang this:

Of course, contradictions are what Will Oldham and his various identities are all about, and in approaching this uncommon journalistic opportunity to review the Bible, I remember that it too has a bundle of them.  Has any other artwork inspired such wildly differing interpretations?  So while on my first few listens I heard only the self-interested, individualistic, life-denying but reward-seeking stuff all those Fundamentalist Right-wing Christians seem to pick up on, in a different state of mind I now get a man expressing love and faith to grapple with his despair at an unfair world.  Turns out this stuff’s deeper than you think, if you can get past the annoying fans.

Oldham’s delivery here is among his finest. Stepping up to match his collaborators, he’s in full-on improvisatory mode – pretend his voice is a saxophone and hear his melodic and dynamic invention, his being-in-the-moment, his expression.  These musicians are the opposite of on-the-grid and, like the best work of all of them, repeated listens are rewarded.  Now I find myself craving this, when I put the kettle on, or as I’m walking.  Perhaps music isn’t so different from religion.

“What is normally called religion is what I would tend to call music – participating in music, listening to music, making records and singing. I think records and music are more appropriate and more respectful of the human soul than the churches are. And more respectful of the needs of humans to communicate with the aspects of themselves that are neglected by language. I don’t think people think about God so much as they think about themselves and how they’re going to get through life.”