‘Blurred Lines’ and the Banality of Male Sexuality 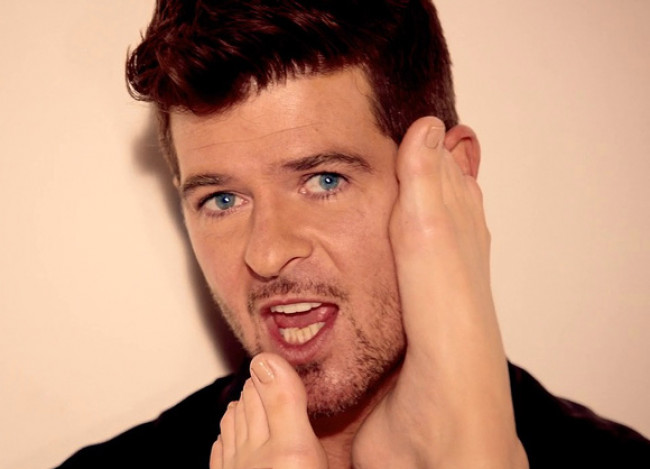 I’m going to be honest here, I initially tried to ignore the criticisms of ‘Blurred Lines’. After ‘Get Lucky’ I was hungry for another pop smash and ‘Blurred Lines’ seemed to fit the bill. Then I picked up on the rumblings of discontent. According to one commentator the song was “kind of rapey” and played around with ideas of consent. After a few listens I couldn’t deny the song’s inherent creepiness, yet it seemed to me that deciding whether or not the song was an endorsement of rape (I don’t think it is) was not the only thing up for discussion. As far as I can see, the song seems to revel in some very dubious and also thoroughly predictable elements of male sexuality, and worst of all it does so with an unshakable sense of self-assurance.

Some people may question why anyone would be upset in the first place. Didn’t Odd Future build their career with songs about rape? Yes, but there’s a vital difference. Odd Future knew they were courting controversy. It was part of their appeal. Same with an artist like G.G. Allin. His intent was to shock. Robin Thicke seemed totally unprepared for any criticisms of ‘Blurred Lines’. It didn’t even occur to him that anybody would be upset. He genuinely believes the song is sexy. Say what you will about someone like Eazy-E but I’m betting he didn’t pen ‘Nutz On Ya Chin’ because he thought it would bring a little romance to the evening. Part of the problem with ‘Blurred Lines’ is that it unquestioningly accepts its own worldview. It doesn’t think it’s controversial. The song overflows with the confidence of the straight male who is perfectly secure with his place in the world. Yet in doing so it betrays a narrow-minded, regressive, and unimaginative idea of human sexuality.

First off, the lyrics are not sexy. Not in any way, shape, or form. Thicke’s idea of sexiness is getting “blasted” and smoking some weed. We already have a problem. Here is a song that thinks it’s ‘Kiss’ by Prince but is in fact ‘Why Don’t We Get Drunk’ by Jimmy Buffett. Why exactly does Thicke want his lady friend to get wasted? So she can lose her inhibitions. So she can let go of the “good girl” that stops her from truly enjoying sex and tap into her inner animal. So basically Robin Thicke’s sexy, playful song is about taking a “good girl”, getting her drunk/high, and then fucking her. No mention of the pleasures she will receive. Nothing about 23 positions in a one night stand. She’ll be wasted. She’ll have sex. One thing’s for sure, Robin Thicke knows she wants it. Is it rape? Perhaps not, but it certainly doesn’t sound like seduction. It sounds like bad sex. It sounds like a man getting off on the idea that a “good girl” finds him attractive. It sounds like a man with some very clichéd views about what women, and men, want from any given sexual encounter.

Why exactly does he want a “good girl” anyway? What is a “good girl”? This aspect of the song seems to tap into one of the most overused and objectionable ideas about female sexuality. A woman is either a virgin or a whore. A good girl or a bad girl. Many men want good girls because it gives them a feeling of conquest and power and because the idea of a mature, sexually experienced woman terrifies them. ‘Blurred Lines’ revels in the idea of the male liberator who frees the frigid woman by getting her wasted and fucking her. Deep down, that’s all she needed. For some reason many men approach the idea of female sexuality with the one thought that women are too uptight. They need to let their hair down. They need to let themselves enjoy things. Things like sex. The problem can’t lie with the man or his limited technique. If the woman would just relax she would enjoy a man taking charge and giving her what she needs. The man knows that ultimately she wants it.

We are at the point where (I hope) rape is seen as repugnant by the majority of men and the idea that, deep down, women desire to be raped is met with real disgust. Yet the idea that a straight woman desires a masculine man to take control and simply give her a good, hard seeing to is one which continues to have credibility. Even though Morrissey claimed that he spent his teenage years in the feminist section of his local library he still felt the need to include the line, “It took a tattooed boy from Birkenhead, to really, really open her eyes” in The Smiths’ song ‘What She Said’. It passes for wisdom and insight to insinuate that the conflicted female merely wishes to give up control and be used as an instrument for male sexual satisfaction. Only through female surrender can either party achieve true fulfillment.

11 Responses to ‘Blurred Lines’ and the Banality of Male Sexuality