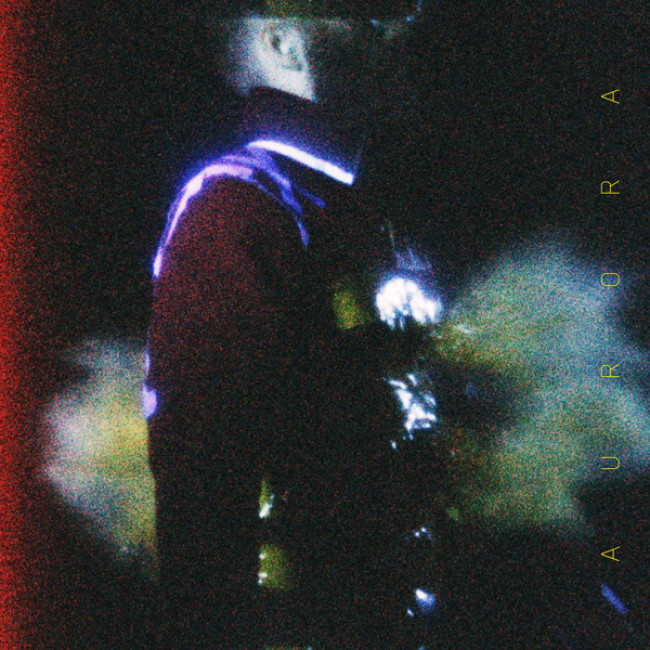 A U R O R A aims directly, through its monolithic construction, at blinding luminescent alchemy; not with benign heavenly beauty but through decimating magnetic force.

This is no pristine vision of digital music, it is a filthy, uncivilized offering of interrupted future time where emergency flares illuminate ruined nightclubs and the faith of the dancefloor rests in a diesel-powered generator spewing forth its own extinction, eating rancid fuel so loudly it threatens to overrun the very music it is powering. (Ben Frost’s Bandcamp page)

I can already see the kids talking now: “Dude, have you heard the new Ben Frost yet? It’s EPIC.” Wait – do the kids still say “epic”, or has that phrase died from sheer redundancy? No matter – no doubt Mr. Frost himself was aiming for that precise quality in this fragrant electronic thumper, A U R O R A. Lofty heights. Or, perhaps, deep depths, given the “darkness” built into this, or at least the “darkness” of a thoroughly debugged sci-fi first-person shooter video game.

Let’s be clear – this ain’t bad. I admire Frost’s determination and tunnel-vision-like focus toward this single mode of black and dangerous and, err, frosty sound engineering. There are moments, like in “Secant”, where the stoic intensity heaves so far into the red that ya can’t ignore it; and YOW, the minute-and-a-half supernova of “Diphenyl Oxalate” that follows is a wondrous slab to behold. Yet these hard-edged and straight-faced subterranean pulse emitters – and I’m talking to you, “Venter” – sound scripted, and not from an original script, either, but one borrowed from crusty award-winning directors of post-apocalyptic blockbuster EPICS (note to self: avoid the term “post-apocalyptic” in future writings – about as hackneyed a phrase and idea as “epic”). There’s an orchestrated blast in “Venter” that you can whiff from 30 seconds away.

The worst thing about this scriptedness is that, as a result, Mr. Frost has created a soundtrack that lacks any context. “No Sorrowing”, a single withering chord accompanied by machines and faint ghost sounds (simulated ghost sounds, that is – for Ben Frost is not a medium, as much as he’d like to convince you otherwise), progresses like a snail with a metal carapace into an anticlimactic, ear-numbing buzz. Might work in a hushed, tense scene at 2 AM beside yr dying friend’s hospital bed – but he/she’s not dying right next to you, so why else should you submit yourself to this migraine?

“Sola Fide” sounds quite similar to “Venter”, except here we find Mr. Frost in his lab, white smock and everything, stretching out guitars on torture racks and monitoring their vital signs, deftly replicating the exact responses that other scientists before him have extracted from the very same method, whilst measuring out the proper amount of dry ice to apply to the situation. Fine creations they are, but creations they remain, for in spite (or, rather, exactly because) of Mr. Frost’s deliberations, the alien world that he’s desperately trying to evoke is just that, a creation.

Now, you might wrap yourself in this shroud and think, “But Lee, nothing’s original anymore anyway, and at least Mr. Frost is aiming for the jugular instead of resting like a fly on the pretty paisley floral print wall.” Yes, you’re quite astute, and that’s true. But this aggressive, single-minded, stage-blood-drenched attack devalues itself when repeated again and again over the course of a single LP, especially when Mr. Frost dips into the same terror palette again and again (worst offense: GRATUITOUS EXCESS OF BELLS, as if tubular bells must always lend some legit sacred gravity to every recording, in the same way that horror movie directors believe that children singing nursery rhymes are reliably creepy).

The real aces in electronic engineering, methinks, are pushing past the stereotypes, inventing their own wavelengths, reaching deeper into the subconscious through ultraviolet (and not always ultraviolent) textures extracted not from big production tropes but from either a) surreal (yet real) lucid dreams of jeweled stalactites/stalagmites and lesser-known submersed cities –

– or b) the most brutal nocturnal dance floor that never existed, where a more compelling and organic savagery dwells in the unfettered beat.

But what do I know? Enjoy yr trip to the movies, kiddos.