Back when Brisbane still had a culture of protest | Prehistoric 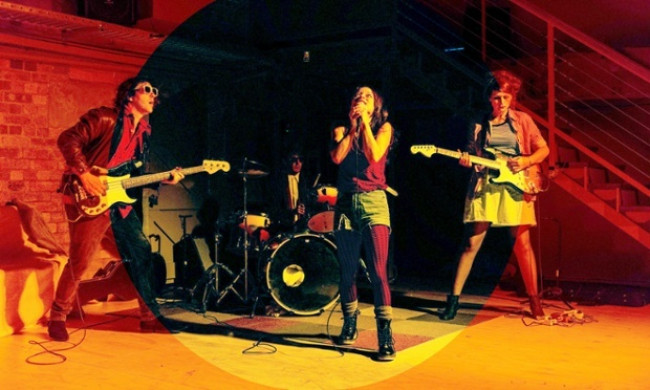 Thirteen hot nights in a row
The cops drive past and they move slow
A million people staying low
With mangoes ripe, who needs to grow?
I don’t want it let down
My own hopes for this town
It’s so hard to get around
Lots of cars but not much sound
In town

To give you the brunt of Prehistoric: four young kids form a punk band in Brisbane’s Joh Bjelke-Petersen years (although the man himself is never named). The play isn’t some wincey nostalgic trip but a cathartic inquiry that looks at the bare marrow of Brisbane’s ignored, rather than forgotten, recent history.

Written and directed by Marcel Dorney, Prehistoric starts with four characters that, I think like many people, accidentally find themselves in punk. Those who need direction for their anger, violence and disillusionment find it in the validating, spiritual and ideological home of crunchy electric guitars, lurid drumming and angry vocals. Before meeting, all the characters feel its effect – whether it happens as they’re made to watch footy or whether they’re sitting in school, The Saints make their way through. More importantly they make everything seem temporarily ‘okay’, so when Deb (Kathyrn Maquet), Rachel (Sarah McLeod), Nick (John Russell) and Pete (Rebun Witsenhuysen) form a punk band, with no knowledge of musicianship, it’s a personal emancipation – a feeling of really, finally, doing something. It’s only later we see how the personal is always political.

The formation of the band also shows one of Dorney’s most inspired decisions: to actually form a band with actors who had never played their instruments before, actualizing the punk/DIY aesthetic of the play. If punk is synonymous with any musically historical moment, it’s the downfall of the virtuoso-rock-guitar-god and the rise of the nerdy amateurs.

Prehistoric is also very savvy to Australian ‘culture’ and before our four young stars are victims of their own police force, they were targets for the Aussie male Bevan in his hooned-up car and his preference for calling any man unlike himself, a “faggot”. As a gay, a lesbian, a woman and a dandy-dressing kid, the four characters are conspicuous by their very presence.

As a play as much about brute politics as personal intimacies and friendships, the stage collects minute-by-minute of misery, betrayal, campery, sexual confusion and sexual wanting. What makes Prehistoric so watchable is the knowledge that humans are infallible and that the betrayal of a friend in a love triangle sometimes feels equally as significant as the betrayal of the justice system on a society. As a political play, it doesn’t forgo intimate personal moments – like meeting at a girl at a concert and making sure you wear the same clothes when you see her next. Or almost hyperventilating because people actually want to talk to you and you actually want to talk to them.

Brisbane’s beloved 4ZZZ FM radio station is the center and organisers of the punk resistance, the ones who get ‘word out’ about the underground gigs – because if you can see a poster, so can the police. And the amusing music divide that emerged in 4ZZZ comes through in the form of a slightly older English zed member who thinks the only sincere and authentic music can come from… a banjo. Nevermind punk.

Historically the play is an extremely honest portrayal and an association with 4ZZZ was enough to get you fired from your job, to be a person of suspicion, or as one older zed member found out, a 4ZZZ sticker was enough to get your car windows smashed in and your house searched – and he was just borrowing the car. Records of police surveillance show government spying was omnipresent yet delusionary, with the making of hysterical connections and odd personal theories where none existed.

So with our supposed protectors of liberty ripping through civilians with legal gusto and holding Brisbane by the throat, the police’s power extended from the threat of sexual abuse to the power to bash heads against concrete. Yet initially the characters are virginally naïve about what could be done to them. And aren’t we all? What Brisbane-dweller has not heard about the Joh Bjielke-Petersen years? My grandparents and parents are loaded with stories of police spying in Elizabeth Arcade and odd late night calls. But even for the most sensitive and empathic of us, moving ourselves to this consciousness is difficult. Which of course, is part of what great art does. It’s what Prehistoric does.

During the play, I realised something. It was right at the finale when the band is standing stark and dumb, feeling both afraid and bold as red and blue lights hammer outside and glass crashes, and I watched four young kids play on, louder, and made so daring by the mere coincidence of being in band together. And I realise, this is what music can do. Music as confrontation. Music as resistance.

This is why I have always felt picking up a guitar in Brisbane means something more than picking up a guitar in Sydney or Melbourne. Music to Brisbane isn’t simply aesthetic pleasure or nomadic avant-garde adventures – there’s both the promise of freedom and the thrill of defiance. When you’re inhibited by the very music you play, the very person you are – something changes. If normal political decorum flies out the door, so does normal musical decorum and normal social decorum and then anything can happen. And that’s what punk is: Anything Happening. It’s no surprise the first (accredited) punk album came from a Brisbane band.

If society can’t be handled by ideology, by meaningless political rhetoric and traditional values of yester-year, it can be handled by force. It’s not protest or political confrontation, but the rebellion against good education and ‘family values’ that brings out authority’s ever-increasing desire to impose itself on every facet of humanity – from your personal freedom to what colour your piss is. It’s no coincidence that the most interesting and radical histories are always withdrawn from the mainstream account. If the powers that be could completely have their way, the world would be a dullard.

So in an odd time like this, the only control available for our four characters was to play a song and, I wonder, what would that feel like: to have a political mission so clearly wedded to your reason for being on stage? When people took music seriously, as something more than simple entertainment or distraction. When punk hadn’t unwittingly toddled right into press clipping ambitions and MTV broadcasts.

But whatever turbulence there might have been 30 to 40 years ago in Brisbane, it isn’t marked on our landscape, in this time. But that’s not to say they’re not still here: Brisbane’s freaks, curiosity-seekers and those with undesirable desires and odd ambitions and lifestyles.

As the play gets to the end and friendships have been tried and tested, police defied and liberties violated, it’s the purity (a term I normally baulk at, but the characters are undeniably pure) of the band and their mission that resonates. In venues like Baroona Hall in Caxton Street, our four character’s final performance place, the hope of political emancipation was made reverent and the musical madhouse became a sacred place to erase societal insanity – just by playing a song.

Women are like wolves, my grandpa used to say. And so the men never trusted a wolf. Now there’s a majority of indifference to avant-garde and art, which the mainstream looks upon as either gratuitous or irrelevant. You could chart the narrative of western civilisation on a map of popular music and yet whether, in either underground or mainstream culture, rock as such serious weighting – I wonder. The 1960s and 1970s shared an ideology of rock as a collectivist countercultural institution and much of this seems largely dispensed in a generation who share the same histories, but not the same ideologies. Rock as oppositional is a small concept in a big music world now, and seeing Prehistoric isn’t just sweetly nostalgic, but it gets to the fabric of that thing called rock, called punk.