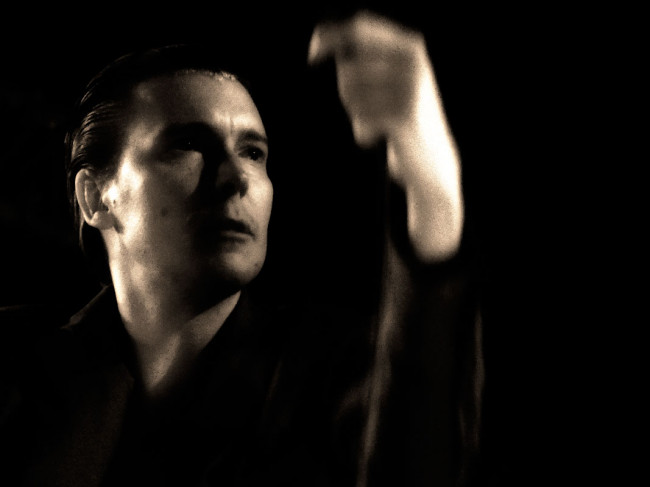 Alex Cameron makes every show feel like a homecoming. He’s a warm presence on stage. He speaks calmly and fondly about his connections to Melbourne, and dedicates more than a few “…and on the saxophone…!” asides to his friend-cum-‘business-partner’ Roy Molloy. Anyone familiar with Cameron’s work knows it toes the line of satire to the point of offence, but his live performances seem to leave any semblance of sarcasm to social media – standing eye to eye with Cameron comes with nothing but sincerity.

Preceding his set at The Croxton Bandroom in Melbourne are two other acts. Body Type are an effortlessly charming rock act, fuzzy and loose, taking plenty of pages from the hollowed library of Beaches, if they were more concerned with just getting on with the fun.

Laurence Pike is a completely different beast all together – and it is beastly, mind. Pike sits alone behind a drum-kit on stage, working it as though it were fitted with systems of pullies and timers rather than just skins and cymbals. Like clock-work he skitters sounds out of the surfaces, fitting in the slightest of embellishments – a chime hidden on a tom here, a rattle of drumsticks on a rim there. Backed by a bevy of samples and pads which wooze out esoteric soundscapes, Pike creates a performance more befitting the NGV than Croxton Bandroom. And that’s not too far from the truth, Pike having finished work on the dance performance ‘Memory Field’, which premiered at Melbourne’s Arts Centre.

Cameron’s team takes the stage and we open with The Chihuahua from last years ‘Forced Witness’. My issues with the work Cameron came out with in that record are two-fold. Firstly, I feel like it’s missing Alex Cameron, or at least, what I thought Cameron was. That’s on me I suppose. Secondly, the bombast of the whole thing swallows his seedy characters up. Any performance of Running Out of Luck pales in comparison to say, The Comeback, simply because once Cameron dons the acoustic and is strumming along with everyone else, he’s lost to me. When he closes out the show with Taking Care of Business, he prowls and creeps about the stage. He’s just a greasy weird dude in a stained white singlet – it’s so fucking strange and funny and unique – singing shit like “…and by the dam below the house with the yelping pups / oh, she ties a rope around / just take care of business”. Where else do you get that? I want that. Not this late 80s self-aware pastiche that is a well dead horse by now.

One last thing I’d want to mention is this. When I watched Cameron perform at Laneway, he was definitely worse. Probably comes with the space, that open air doesn’t really lend itself to songs about waking up covered in semen. But during that set he played a song called ‘Marlon Brando‘, and if Junkee’s FB-sponsored post inputs covered you, I’m sure you’ve heard of it.

During the song; Cameron, a straight guy, uses a gay slur. Obvious controversy abounds for that, sure. He provided an explanation before launching into in at Laneway, which I don’t remember (I’m sure it said something about the power of words and his desire to fully realise the character or something), but at his private show, not a comment was made. Why’s that? Was Cameron hoping the social media shame brigade would be less likely to tear him apart at a major festival if he gave an explainer? And if so, was he betting that such a brigade would not purchase a ticket to his show and get a beer and buy a t-shirt and then live tweet how disgusting he was?

Gay people still deal with slurs and much worse on a day to day basis. ‘Marlon Brando’ is a major part of Cameron’s most recent commercial output. I’m curious as to when he decided an explainer for the song was no longer necessary at his solo shows, or if it ever was given to begin with.

I don’t know. But the environment of the two circumstances, and the actions taken, or not taken, are interesting to note.