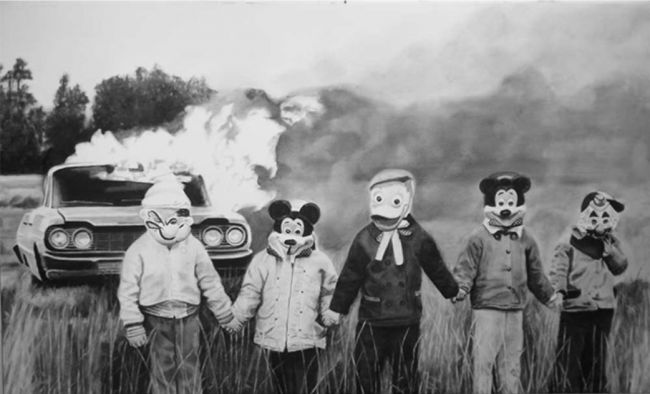 Now there’s a buzz(feed)worthy headline for you. These aren’t in any particular order. The list neither counts up nor counts down. Some of these are from albums I’ve hated; some are from albums I’ve loved. They don’t have much in common besides this idea I have that the creators are in love with sound, manipulating sonics the way we each manipulate our personas online and otherwise. Who do you want to be today?

The other thing these songs have in common is the majority of them are very dark, in some cases oppressively so to the point of suffocation. From a personal standpoint, this doesn’t make a whole lot of sense. But then we all have our days don’t we, and everyone knows that life is more than pink fluffy bunnies and dipshit kittycats.

But as rides go, it isn’t a bad one. Except for Pharmakon, maybe. I’m tempted to call that song a sonic holocaust, but some pretty pictures came out of the holocaust, testaments to the nobility & redeemability of man if you want to see it that way. Pharmakon is a season in hell worse than Milton, let alone Rimbaud, ever imagined. Probably not likely to go over well at a big summer music festival so you might not have heard about it in the places you go to read/hear/learn about edgy, non-mainstream independent music. (I’m teasing of course – Pitchfork gave it an 8.0.)

Albums of the year so far? This kind of thinking is reductive and dumb, but I’d say either Kanye or The Knife, although I’ve probably listened to Pere Ubu and Happy Jawbone Family and Blanche Blanche Blanche more than any of them to this point.

We’re already at 500 words, and if I write about each one of these you can multiply that by about 10. Since I still have to finish that Kanye review, we’re going to leave that particular path untrudged. I would like to say, though, that the Daft Punk song should have more asterisks next to it than the last 15 years of Olympic records. It is so rare that a Top 40 song has more than one great hook, more than one great melody, and any emotion approaching joy, that it makes ‘Get Lucky’ sound better than it probably is. What it actually is, is a great Chic song. As for the rest of the album, it just reinforces my belief that Daft Punk are the Puff Daddy’s of white boy electronic music. They’re more curators than sculptors, more arrangers than artists. But when ‘Get Lucky’ comes on I don’t change the channel, so fuck it. Good for them.

And here it is written out for easy scanning. For your convenience, anything I’ve already written about has been highlighted. The extra reading is well worth your time. I’m way more entertaining than I need to be, given the subject matter.

And here’s five great ones that aren’t on Rdio.