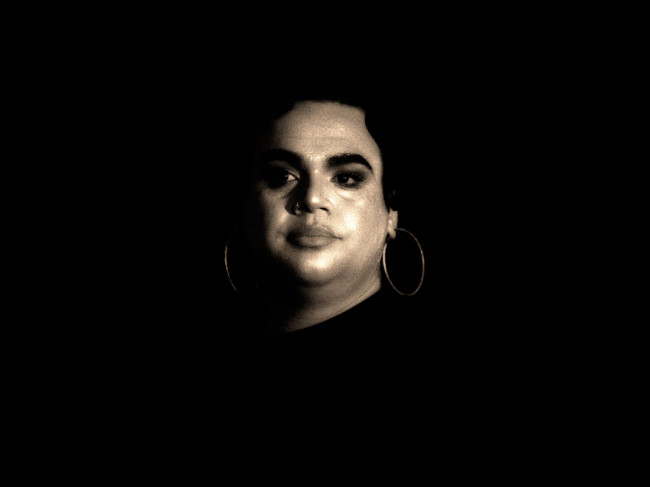 Can only be honest here, I’m late. Just in time to catch the closing roar of Zola Jesus reverberating off of gallery walls, nothing more. But those few and final tortured howls? Powerful stuff.

I have to admit being a little late arriving when it comes to catching Miss Blanks live. That’s not to claim unfamiliarity. Over the last two years she’s been kicking goals while negotiating her musical personality with the world at large. This is an artist making things happen.

With lyrics sharp and truths raw, Blanks is becoming an increasingly visible presence. What’s more her work extends past music. As a talking head she hasn’t backed down from sketching out the conceits holding back a more diverse picture of Australian music.

She charges onstage. Brought to bear these words are pointed, but their delivery carries a triumphant tone. Pushing it all forward is a conviction music can change it all, a grand cosmic correction toward all that’s right and righteous. Her performance is uplifting. It pumps this listener with the confidence to take anything in stride.

If Blanks’ work carries some overarching message it’s one of agency. Oppression can weigh a ton but the authority to claim power comes from self. It isn’t contingent on others. This artist isn’t seeking permission.

Behind her as DJ is Dewi Djamal Wilson. Like Blanks, her own outfit Madboots creates music on the periphery of Australian hip-hop. Their pigment is different, two honest hearts on the outside of popular taste. Both intent on breaking the stale, regressive narratives of the Aussie sound.

Some of Zola Jesus’ crowd have filtered out. But Blanks has her core audience and they’re raving hard. Others look on.

A common line thrown out about Miss Blanks is that she’s conjuring a voice too loud for the mainstream to ignore. Believe it. For this artist there’s a steep mountain to climb, but when an individual carries the ambition to disrupt the established order of things, eyes glinting with inner fire, how can they be anything else but an artist true?

In world where music is becoming increasing led by clueless consumers, Big Tech and corporate interests we’re in need of heroic figures. Individuals who are capable of challenging convention and status quo. I’m talking the bare bones of possibility here, but Blanks has the potential to become exactly that.