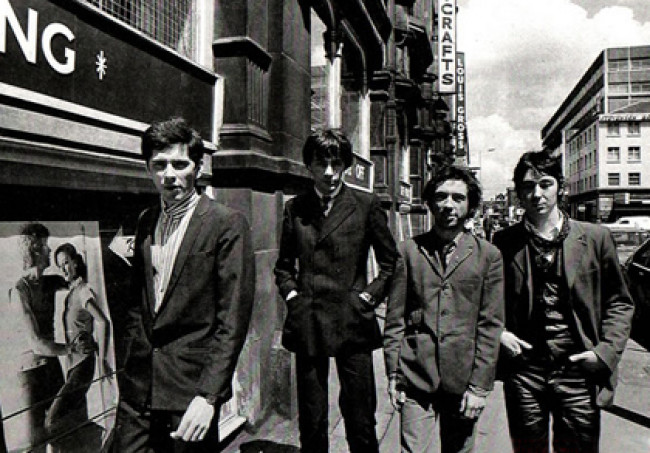 I’ve never properly attempted to write about Buzzcocks. I don’t want to try. I believe their first three albums (+ the three bootlegs I bought at the time, on vinyl) are peerless. I believe their initial run of singles (+ the final three which never really bothered the charts) are exemplary, manifestos to stay alive by. I believe EVERYTHING in their initial incarnation was…. man. I just love it, ok. Every year since ’78, I’ve played them with alarming regularity, continually discovering new things. I can’t decide a favourite album, nor a favourite single, nor a favourite song. The first girl I ever snogged was wearing a homemade Buzzcocks T-shirt (I didn’t snog another for six more years). Their songs… no. I don’t want to discuss their music. It’s too precious.

Here are your votes, culled from Facebook after being given an almost impossible decision – choose your favourite three Buzzcocks songs. None of the ones I voted for are in the chart. I was swamped by the response.

The Buzzcocks are the perfect mesh of punk and pop, a cleaned up version of the grittier Sex Pistols, but still pretty bratty themselves. Pete Shelley’s voice has a melodic, high-register flair. He sounds downright desperate and pleading on songs like “What do I Get?” and “Ever Fallen in Love?,” but it’s OK because the chunky music that surrounds him is so easy on the ears. (Amazon.com reader review)

2. Ever Fallen In Love (With Someone You Shouldn’t’ve)

Sometime during November 1977, the band watched the musical Guys and Dolls in the TV lounge of a guesthouse in Edinburgh, Scotland. It was the dialogue “Have you ever fallen in love with someone you shouldn’t have” from the film which inspired the song. The following day Shelley wrote the lyrics of the song, in a van outside a post office, with the music following soon after. The music and lyrics, as well as the singing, belong to Pete Shelley. The song uses the verse-chorus formal pattern and is in the key of E major. Both the verse and the chorus start with C# minor chords (sixth degree in E major), which “give [the song] a distinctly downbeat, edgy feel.” The minor chords and the D-major-to-B-major move in the chorus are unusual for a 1970s punk song, yet they contribute to its ear-catching nature, along with the vocal melody. The verses feature a guitar riff and a double stroke tom-tom drum pattern over the E chord. The vocal melody ranges from G#3 to baritone F#4 in the verses and chorus; in the ending, Shelley hits a tenor G4 and then a G#4. The lyrics consist of two verses (of which one is repeated) and a chorus. According to music critic Mark Deming, “the lyrics owe less to adolescent self-pity than the more adult realization of how much being in love can hurt – and how little one can really do about it”. (Wikipedia)

EC: At 16, I liked punk rock. Especially the Buzzcocks. That’s when I started playing guitar, too. I remember the UK fanzine Sniffin’ Glue by Mark Perry. It showed you how to go out there.
GM: By 1979, Edwyn thought punk rock had all gone to shit. It was all idiots. By that point, there was an elitist element about punk, like it was only for those in the know. He was very, very, very strict. The Clash? No. The Stranglers? Absolutely not a chance. The Sex Pistols and the Buzzcocks, yes. It was important to take a position. (Edwyn Collins and Grace Maxwell)

Buzzcocks were a genius art-punk band from Manchester who mixed lovelorn, spiteful lyrics with jagged guitar riffs and rampantly incestuous pop hooks as they stormed the British charts during the late 1970s. They split up following three, wonderful albums… (Nirvana: The True Story)

“Don’t you wish you were free, Lenina?”
“I don’t know what you mean, I am free. Free to have the most wonderful time. Everybody’s happy nowadays.”
He laughed. “Yes. ‘Everybody’s happy nowadays.’ We begin giving the children that at five. But wouldn’t you like to be free to be happy in some other way, Lenina? In your own way, for example; not in everybody else’s way.”
“I don’t know what you mean,” she repeated.
(Aldous Huxley, Brave New World)

Buzzcocks is a punk band, but the songs on A Different Kind Of Tension embody that titular tension—the group’s desire since its inception to play simple, stupid songs that were neither simple nor stupid. That paradox is central to Buzzcocks, and it’s never as strongly as evident as on this album. The Ramones may have created the idea of bubblegum-plus-chainsaw pop-punk, but instead of feeding ’60s garage rock into a ’70s punk meat grinder, Buzzcocks used the chirpier, harmonically rich songcraft of The Beatles and The Zombies as raw material. The record’s most tuneful example of this is “You Say You Don’t Love Me,” a forlorn, bitterly witty love song on par with Singles Going Steady classics like “What Do I Get?” and “I Don’t Mind.” (A.V. Club)

Everett, Moz once asked me why I thought ‘You Say Don’t Love Me’ wasn’t a hit (a tune he, later, did live.) I could’ve said it dates from the time when BCs were a dusty file at the back of some EMI filing cabinet in a room to which no-one could find the key. Sadly, that was a couple of years before I could’ve rejoindered: ‘Why wasn’t “Shakespeare’s Sister” a hit?’ Obvs, the former beats the latter. This has been a fun thread to observe, esp. as ‘Ever Fallen…’ is cited only occasionally, while obscured gems are being polished. (Richard Boon, Facebook)

Ralph Nader came to prominence in 1965 with the publication of his book Unsafe at Any Speed, a critique of the safety record of American automobile manufacturers in general, and most famously the Chevrolet Corvair. In 1999, a New York University panel of journalists ranked Unsafe at Any Speed 38th among the top 100 pieces of journalism of the 20th century. Nader is a five-time candidate for President of the United States, having run as a write-in candidate in the 1992 New Hampshire Democratic primary, as the Green Party nominee in 1996 and 2000, and as an independent candidate in 2004 and 2008. (Wikipedia)

Buzzcocks were the first band I ever saw – Chelmsford Odeon ’78. I was so naive, I thought that the support band Subway Sect were the main band and couldn’t figure out a) why I didn’t recognise any of their songs (I explained that away to myself by surmising that bands live must sound different to bands recorded) and b) why everyone didn’t leave after they’d finished. I was in the front row, smoking a crafty fag: and yes, I did go out and buy a Subway Sect single the following day (‘Nobody’s Scared’). It wasn’t as tuneful as I wanted, but immediately I was loving the lyrics and thunderous drums. Plus, it was half-price. Song Of The Day – 336: Subway Sect

I still believe the first three Buzzcocks albums to be the most perfect run of albums I have ever heard. Even now I can’t bring myself to start describing their music – a genius amalgam of Krautrock, sardonic punk attitude, lovelorn lyrics and unstoppable hooks – for fear of dispelling even a tiniest fraction of the magic. Every year, without fail, I listen to those three albums (and all the assorted add-ons) time and time again. And every year, without fail, I feel cleansed for doing so, invigorated, far more able to cope with the detritus and flotsam of life than I had been before. (Buzzcocks live @ The Zoo, 19.11.09)

12. Moving Away From The Pulsebeat

The big secret is Shelley’s worship of Krautrock’s obsessive focus on repetition and rhythm, which transforms what would be “simply” basic punk songs into at-times monstrous epics. The ghost of Can particular hovers even on some of the shorter songs — unsurprising, given Shelley’s worship of that band’s guitarist Michael Karoli. “Moving Away From the Pulsebeat” is the best instance of this, with a rumbling Maher rhythm supporting some trancelike guitar lines. (Ned Raggett, All Music)

Breakdown, Noise Annoys, Friends Of Mine, Are Everything, Late For The Train

Drop In The Ocean, Just Lust, Mad Mad Judy, Sitting Round At Home, Walking Distance, What Do You Know, I Look Alone, Whatever Happened To, Why She’s The Girl From The Chainstore, You Tear Me Up, Strange Thing, Oh Shit, I Don’t Know What To Do With My Life, Airwaves Dream

AND, AFTER THE FALL

I read a while ago that the major label Buzzcocks guitar sound was arrived at by layering chords which were all slightly out of tune with each other, resulting in a kind of woozy ‘chorus’. That was why they had such a unique sound. The guitars on the new stuff sound like meticulously in-tune indie rock thrashes, and therein lies the problem (the lyrics are too direct, too). David Callahan, Facebook

Wish I Never Loved You

Totally From The Heart