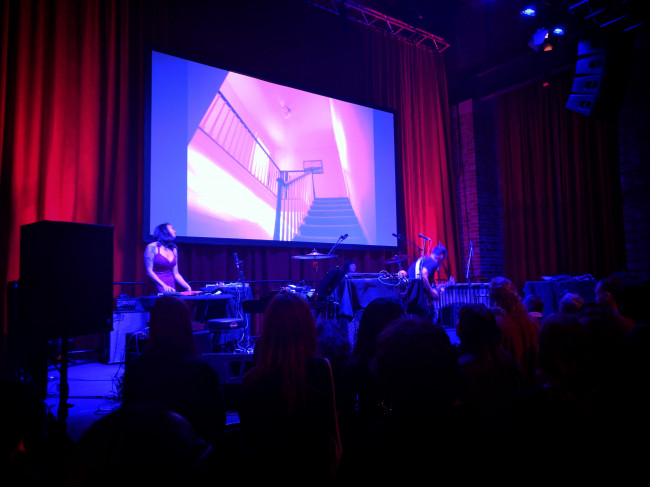 For a moment, when technical difficulties intrude, Jamie Stewart’s mask slips. “Sometimes, all you can do is just fucking start over” he offers to the crowd at Melbourne’s electrical-warehouse-come-arty-locale The Substation. It’s only song two of the evening, but Stewart’s missed vocal entrance is easily forgiven –  given the scope of the evening, it’s a minor detour, and we’ve still a long winding way to go.

Xiu Xiu’s reimaging of Angelo Badalamenti’s score for David Lynch’s increasingly influential ‘Twin Peaks’, Xiu Xiu Plays the Music of Twin Peaks, is vast and scattered; a soundtrack given new life in the most manic and ambitious of ways. Originally performed for an exhibition at the Brisbane’s Gallery of Modern Art dedicated to the director himself, the songs eventually finding their way to a Record Store Day pressing.

The band; Jamie Stewart, Angela Seo, and Shayna Dunkelman, took Badalamenti’s score, one made for the moody drama and mystery of Lynch’s crime thriller, and made it flesh – in performance, Stewart’s face is red and worn; he contorts himself, jives and shakes, runs his fingers through sweat slicked hair. That a soundtrack based in such a cool, calmly inquisitive disposition could be made, at times, so violently possessed and cacophonous speaks to the tenacity with which it is performed, Xiu Xiu missing nothing in their recreation.

Synthesizers, vibraphones, drum machines, keys, guitars, modulators, bells, sticks and clatter and every other sound that may evoke a town deep in the heart of the Pacific Northwest. All are used as the band rotates about the stage, performing the album front to back, forgoing any audience interaction. The entire room is often bathed in red, crimson velvet curtains hanging alongside the brickwork of the substation. Lynch’s world is invoked in more ways than one.

‘Laura Palmer’s Theme’ is tragic and beautiful, doomed and forlorn it serves as ultimately a blueprint for the emotion of the performance. Though at times Stewart’s guitar yowls and Dunkelman’s drumming drowns out all else, cases like ‘Blue Frank/Pink Room’ and ‘Packards Vibration’, it always returns to a place of quiet melancholy – nowhere more exact than in Xiu Xiu’s performance of ‘Sycamore Tree’.

The lyrics for ‘Sycamore Tree’ were written by Lynch himself, originally performed by famed jazz vocalist Jimmy Scott, a singer known for his tender, if campy, treatment of love songs. Stewart’s vocal reimaging of the song is powerful, wavering, wretched at times and yet always captivating. Stewart goes rigid, his whole frame pressed to a single point where his lips and the microphone meet. Droning on through syllables whilst cutting through other words wholesale, he’s backed by visuals of conifers slowly sweeping the sky, and Stewart gives ultimately the best performance that evening in the seven minutes that ‘Sycamore Tree’ exists, Seo’s contributions on piano only heightening the moment, allowing Stewart to drop away from his statue stance, bobbing and shaking away from the microphone, as though a tune just came to him, like something he remembered on the radio. I’m still mulling it in my head, but I’m wondering if it’s one of the best live performances I’ve ever seen.

‘Falling’ is a warmly received return to some semblance of normalcy, a wholesome stomp alongside Dunkelman’s deft vibraphone playing, also showcased on ‘Packards Vibration’ before it. Normalcy is not welcome for long though, and the performance closes with ‘Josie’s Past’, and a reading by Dunkelman from Laura Palmers diary – an excerpt below.

“But I am Laura. I am sad. God, I’m sad again! Why! I miss laughter and a day where time is spent with my friends who don’t care what I think of late at night. They don’t hate me for sometimes dreaming late at night, with my hand buried between my legs, ashamed, and of how I wish that my other hand would simply pull the trigger…”

With that, Dunkelman stares blankly across the crowd, eyelashes fluttering. Stewart explodes into the ‘Mairzy Doats’ rhyme; then, a heartbeat thump, bells ring, the band stands, bows, and leaves.