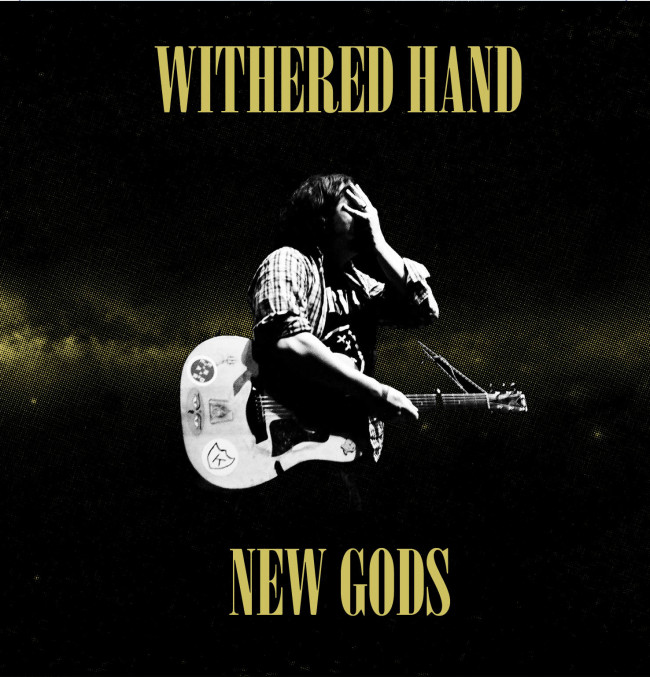 Withered Hand excels where Beck flops simply by being himself - which, let's face it, is a difficult thing to be in a studio sometimes.

So lots and lots has happened between here and Xiu Xiu (th-thump, th-thump), and my private ledger of reviews to write has been swelling as subtly as my belly while I attended to other crucial real-life affairs. And meanwhile the parade of faces and sounds marches on and on – Perfect Pussy, in particular, beg to be stroked for their supposed raunchiness, and the multi-colored spaghetti cover of Liars screamed at me yesterday from behind the glass counter.

My head, on the other hand, is still stuck on the modern singer/songwriter quandary. The one that I posed back in the Beck review. The question – the one that Scott alluded to last year at the logical conclusion of his Sky Ferreira review, and that I hope we can still pursue: can white male dudes with guitars make it in the music biz today and not be boring/total dicks?

This brings us to Withered Hand. And this also dovetails nicely with an offhand comment that MEGA VIGILANTE Neil Kulkarni posted on the facebooks, that (and I paraphrase) if ever he saw a bloke with an acoustic guitar stroll his way, he would steer clear away. As a chick, I second the impulse – since, y’know, dudes that approach us w/ woody strings generally wanna woo us and/or get us laid – BUT, in the rare case of Dan Willson, we oughta sit and pause.

I haven’t honestly listened to New Gods as much as a reviewer ought to. But, ayyyyy me, what a lovely breathing creature – not a cold Romantic landscape like Beck, oh no. As folky and twangy and inevitably polished as both creations may be, Withered Hand excels where Beck flops simply by being himself – which, let’s face it, is a difficult thing to be in a studio sometimes. But behind the very jangly Byrds-esque riffs of “Black Tambourine” are some curious observations – “when you tell me you’re lonely / well, isn’t everyone lonely?” It’s a grappling with those clichés that crippled Morning Phase, a grappling that persists in spite of the clean-cut rustic production throughout the LP.

After all, the core of Withered Hand is always Dan’s voice and cracked charisma, a less assured Neil Young, all the less assured since he ain’t one of the strapping youths vying for the public eye in the inkies. Mind, where insecurities translate to brooding in post-punk circles, in New Gods that yields stuffs like the aching “California”, an indigo-tinted evening in a lone gondola down a country creek, or the solace of the title track, which thoughtfully rips open the idyllic romances that Beck fetishized: “I could get behind you / and in the morning we’d be mourning our youth”.

We could argue that the forlorn harmonica intro via “Life of Doubt” has been way overdone, or that Willson is as stubbornly traditional as Beck has become, or that “Love Over Desire” is a bit saccharine – or we could listen and smile and hear a little bit of ourselves, in lines like “I want to hold you close / I want to give up the ghost / but the ghost won’t give up me”. Because, see, that’s the charm of this album – there is no aggressive assertion of professionalism or talent, or selling of an image, no erasing of history. This is unabashedly a product of the American singer/songwriter lineage, between Young and Tom Petty, that down South sweetheart who, in spite of being a massive rock star, never succumbed to the lusty tail-chasing mold. Pure folk-rock-pop hook, and it works so damn well because no-one’s hiding anything.

“Was it easy to pretend / like nobody is dead / and nobody you love will ever die?”

But fuck it, HARDCORE HARDCORE LISTEN TO THE CROWD ROAR. Why “Heart Heart” isn’t the leading single is the greatest mystery of this album, the greatest rush ever conceived with a single piano note, and a mad race of pessimism that would delight any sour introvert – “HEART HEART listen to your HEART and I listen to my HEART and all I hear is my body dying”. The very cry of “cruel wo-or-old” makes this absolutely priceless.

(This video does not have the aforementioned piano note, but at least captures Dan oh so well – )

As I write this, I feel the weight of other assignments pressing in close – but the finale of New Gods, the grand heralding horn hurrah of “Not Alone” assures me that this album was worth coming back to, worth dredging up from the undertow of the onrushing present. Everyone else yells, “Now, Now! Hear me, buy me NOW!”, blinking out neon, thrusting tentacles every which way as they careen down the current. But Dan was just a-sitting down here, biding his time, knowing all too well that timeless crafts like his won’t be swept away in a week.