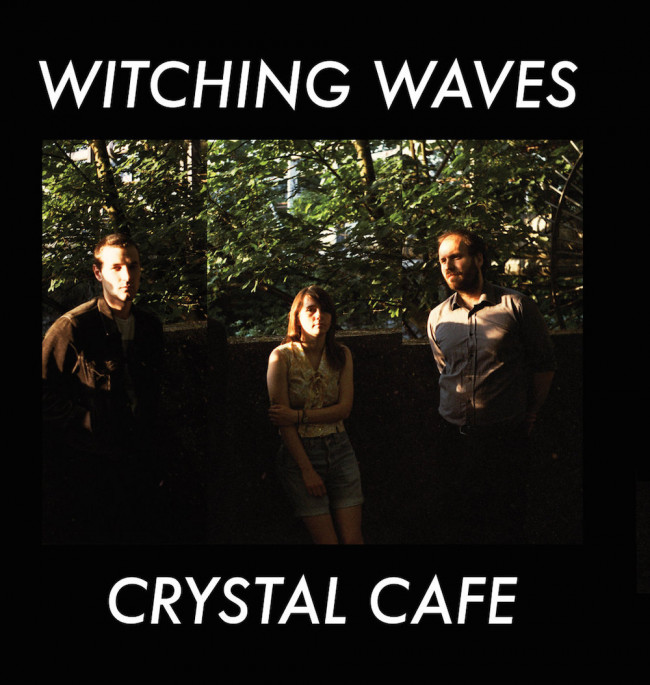 You feel misplaced too, don’t you? Some place was promised for us, for the talents that our teachers adored. This wasn’t supposed to happen. We shouldn’t be the ones stranded in apartments, stuck in the towns we hate, doing the work that no one with dignity would do. Well, then. You can just lie there in your bed, or stand in front of the bathroom mirror at noon with yr bathrobe still on, and accept this abyss gnawing at yr ego, or you can do something about it. You can’t change a thing, but that shouldn’t stop you. Don’t let anyone tell you that nothing’s wrong.

Oh, Witching Waves! They’re three people from London, as conflicted as the rest of us losers – trapped, but by no visible object; stifled, but still overflowing with thoughts. And man! If there’s a dictionary of proverbs somewhere, then their first album Fear of Falling Down would be the definition of “hit the ground running” – but this! Now Witching Waves are racing for yr humanity, to name the fear that binds you, and you, and you.

First, you’re struck by the NOISE, an ocean wave that slaps you flat to yr back. Then the drums kick in and now you’re surging down a rip tide, straight and fast and frightening unless you know how to swim away. In a nutshell, think the bare-bone structure of really early Cure or Wire songs, with a lot of Sonic Youth-ish dissonance and snarl, but with other bleeding hearts at the fore. When Emma Wigham comes in, she draws strength from a cool confidence, one that could crack but won’t through sheer will. When Mark Jasper comes in, he cracks and lays bare those scruples you’ve never dared to say aloud. Together they form that classic chiaroscuro of boy-girl vocals, that duality of expression and experience that unites both genders under one counter-cultural banner.

The words, though. Somehow Witching Waves capture the anxiety of growing up in the modern world, without telling linear stories or referencing certain things. “Make It Up” addresses that myth of adulthood, that we’ll hit some age and know exactly what to do with ourselves. ”Why can’t everything be the same? / So much worse when you make an aim”. The truth is, we’ve lost the dream, and now we’ve got to keep face. It’s not that Jaspar advocates lying – Nothing is worse than honesty – but that’s how we stay alive. A simple cynical strategy.

These are the fears that only close friends share in private, the pain that’s gone numb after months or years of carrying the burden alone. And that’s why Witching Waves burn so bright, so hot. In the three lines of the smoldering, Cure-like closer “Flowers”, Jaspar and Wigham condense that sinking feeling from a shapeless lump into a black diamond –

Of course they miss it. Why else would they repeat the lines, over and over? Cynical strategies, remember. You miss it, too, y’know. That’s the beauty of it – we displaced people have all lost some ideal, and we shrug off the loss to cope; the flowers stand in for whatever we want them to be. Same thing happens on “The Threat” – Wigham speaks of devils and wolves, but when Jaspar yells It’s always coming and you know the signs“, the real demons that plague you come to mind with a shudder.

Meanwhile, tucked within Crystal Café are these little interludes, something the band hasn’t done before. You can catch your breath in those spaces, breathe deep after flying into a rage. “Inoa” comes after the furious “Receiver”, a dizzying inner struggle on defining the self; “Red Light Loop”, the humble window display for the rumbling motorik of “Red Light”, floats down after the savage “Pitiless”; “Anemone” cushions the fall from “Make It Up”, albeit with a matching wary crawl. These instrumental breaks lend a sort of architecture to the album, like the stark buildings in cities that we pass by on our daily routes.

Look. Existence gets tedious sometimes. There are some weeks where only one day matters, and the rest slip by in an amorphous blob. You have to remind yourself of what you’re really working toward, who really matters, why people like you at all. Witching Waves understand this. They’ve been there. And they want you to know – you have every right to be pissed. This wasn’t meant to happen. Crystal Café snaps you back to your senses.