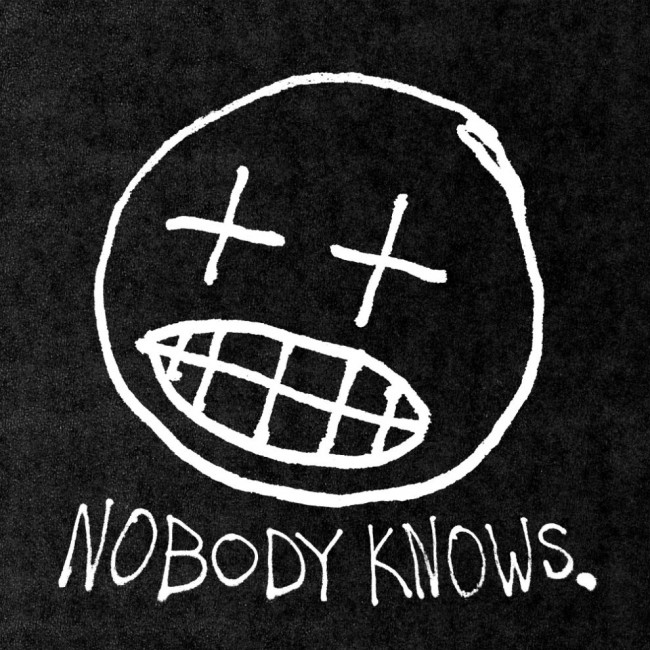 Nobody Knows as in the antithesis of one of Leonard Cohen’s (And also Concrete Blonde’s) best-known songs.

Nobody Knows as in the first two words of a famous American spiritual lament.

Nobody Knows as in the chorus from Pete’s favorite song.

That last one isn’t as strange a connection as it might seem. There’s an openness at the heart of WEB’s music, a seeming lack of guile, that is downright childlike. Not to suggest that WEB is anything less than a full-grown man, but he communicates so directly, leaves himself so vulnerable and exposed, in a way that most adults are too self-conscious or afraid to manage.

I flipped for Acousmatic Sorcery a year ago, and I’m still in awe of Beal’s talent. He has a voice that stops you dead in your tracks. Goddamn, Willis Earl Beal can sing. And on Nobody Knows, an album that is both cleaner and more harrowing than the last one, bloodier and more polished, WEB sounds like a man who has swallowed the entirety of American music whole and is in the process of vomiting it back out in his own image. (And possibly literature. Let’s go ahead and give WEB the benefit of the doubt and assume ‘White Noise’ is inspired by Don DeLillo. It’s not as far-fetched as you might think.)

Opener ‘Wavering Lines’ is the perfect antidote to that similarly-named inescapable Robin Thicke monstrosity. It’s just his aforementioned voice, so attuned to what it means to suffer, to be alive, to carry a weight that threatens to break you into pieces. But then the thick, low cello comes in, followed by a drip from the water tap reverbed and downshifted beyond recognition and WEB is breaking new ground for himself. See the wavering lines. See the wavering lines.

On an album about the inability to connect, it makes sense that the next song opens with radio static. ‘Coming Through’ is a neo-soul star turn, but WEB pulls off the Otis Redding/Marvin Gaye in a way that, say, Fitz and the Tantrums could never dream of. Catpower turns up in the background, but she’s incidental not integral.

Let’s be clear about this. Willis Earl Beal has enough motherfucking soul in his voice to lay waste to the world. There’s a lot of production moves on this varied, eclectic album that should strike me the wrong way. Oh yeah, now it’s cleaned up a bit and polished. Fuck this guy. But this is something special. WEB could sing Coldplay covers on X Factor with duct tape over his mouth and I’d probably still be sitting there riveted. Don’t intellectualize it; this is beyond words. I don’t care if it’s entirely subjective. Willis Earl Beal makes my blood run backwards and causes icicles to form along my spine.

‘Ain’t Got No Love’ is the one tonight that brings me to my knees. I just want to hear its unhinged screams, its atonal polytones, over and over. On this song WEB sounds absolutely possessed, about to be consumed by his own internal darkness. It’s the blues as you’ve never heard it before — Robert Johnson would piss himself.

Be sure to listen to ‘Disintegrating’ on headphones so you get the full effect from the background noise, the disparate muffled voices.

In photos these days, WEB can be seen wearing sunglasses, or reading a mask. In interviews, he comes across as defensive and suspicious. This is completely understandable. Nobody Knows is The sound of an artist so confident that it scares the man who created it. Anyone who lays themselves so open is going to feel awkward discussing what they’ve just done. Like having a nervous breakdown in the back of your friend’s car, there’s not much you can say afterwards.

But he holds nothing back on the record. A music so full-bodied it is able to exist within contradictions, able to resolve its different parts into a union.

Half spider, half fly.
Half predator, half victim.
From horror to comedy.
Half alive, half dead.

A music so soulful it makes the music of others seem trite. Gutless and redundant. Put Nobody Knows next to Peace — hell, put it next to Arctic Monkeys — and it makes those bands sound oh so empty and silly and trifiling and nothing. I’m not knocking them down to put WEB in their place, or hoist him up on their thick jellied shoulders. I just think it’s rare when music comes along that is so passionate, so full of goddamn LIFE, that it underscores what’s missing in so much other music, that it makes the listener unable to settle for mere tunes, or melodies, or cleverness, or hooks. It makes you demand that other music move you the way this music moves you. It compels you to dig in your heels and ACCEPT NO SUBSTITUTES.

I read a thing about WEB in the NME when I was over in the UK last month. Apparently, Acousmatic Sorcery sold 8,000 copies. Look, I know the music industry is in a steady, irreversible decline, but that shit is unacceptable. Thank god he’s on the same label as Vampire Weekend. Next time you’re thinking bad thoughts about VW, imagine them as patrons, helping — however inadvertently — to bring music into the world that is fragile and powerful as Willis Earl Beal. You need to buy this record. Hell, I need to buy this record and everyone knows the only good thing about being a music critic/consumer is you can get anything you want for free.

If you care about music at all, you need to hear this album in its entirety. And if you see Willis Earl Beal, buy the guy a sandwich and give him a sympathetic ear. He’s skirting all over the edge of this world and we need to keep him around.

One Response to Willis Earl Beal – Nobody Knows (XL)