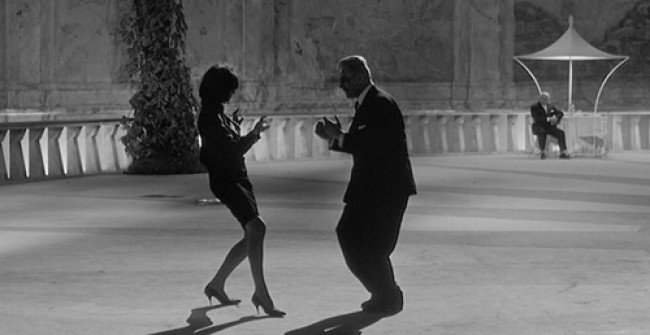 Anyone who cites this off-quoted quip has probably received a negative review. As far as one-liners go, it’s as vapid and reductive as they get. Yet this morning it greeted my Facebook feed alongside a hastily photoshopped Warholesque photo of Elvis Costello. Poor Costello in October 1983 for Musician magazine:

“Writing about music is like dancing about architecture—it’s a really stupid thing to want to do”.

Awkwardly, Costello has since dabbled in music journalism and in a 2008 Q Magazine interview attempted to distance himself from the line altogether:

“Oh, God! Can I please put in print that I didn’t say that! I may have quoted it, but I think Martin Mull coined that. It still follows me around, that one. It’s probably in some book of quotations credited to me.”

Upon a quick Google search I find Martin Mull is a 1970s actor and singer, who according to popular consensus, did initially plague us with this silly metaphor, which itself describes the failure of metaphors to describe music.

But hang on… Is there something “stupid” about music writing? That line has been quoted by people no less than Frank Zappa. For something so apparently unwise many intelligent people seem to write, and write brilliantly, about music: Bangs, Christgau, Roxon, Marcus, Hopper, True, Kulkarni.

Writing about music is hardly stupid, but most music writing is stupid. It’s a virtual 24/7 rollerderby contest between music outlets and young upstarts all competing to let you know just how simultaneously ironic and ‘in-touch’ they are, alongside a keenness to waggle their stunning overuse of clichés and elementary grasp of descriptive, or at least interesting, language.

It is a great solace in life to know not all music writing is like this. Although when someone says, “Writing about music is like dancing about architecture”, they’re probably (if they’re mildly intelligent) talking about something a little different than the vapidity of most music journalism. Below the surface it’s a question of whether language can convey music, or if music can reveal itself through language…?

I don’t truly believe so. Music writing, in this sense, is impossible. The highest aspirations a music writer can have is achieving a kind of unity between music and the individual reader, mediated by language. Yet there’s a vacancy to this dream as even the most talented music writer must appeal to a wide range of descriptive, political, solipsistic metaphors that caress sound, that define its formal features and cultural relations, but altogether, fail to render the sensual experience of music on par with the experience of reading about music.

Robert Christgau has two good witty answers for “Writing about music is like dancing about architecture”.

Of course, the root of music writing is that, plain and simple, it’s writing. You don’t have to tie writing down to its object to see if its representation is correct or true. And it further seems daftly limiting to think a person can’t dance about architecture, or that two artistic mediums don’t have a point of aesthetic semblance.  Yet as obvious and correct as these points are, they don’t answer the implicit assumption that linguistically attempting to capture sound is a vain, impossible, endeavor.

While we might have to reduce music writing to subjective experience, the elucidation of this experience becomes an art itself. Why the hell else am I still reading Lester Bangs over 40 years later? Probably for the way Bangs hustles words up and down sentences, pushing competing phrases into line with both jocular and aggressive lyric. He knows the intricacies of language the way a high school girl knows every detail on her crush. And Lillian Roxon. Again, 40 years later. Aside from her irksomely maternal title as “mother of rock”, Roxon is still the lighthouse that beckons.

Of course there’s the other ‘greats’ like Greil Marcus, a music lover’s wet dream, and Robert Christgau who is arguably the man that started this whole thing. There’s also Jessica Hopper, the contemporary household name of music criticism, whose subtle stylistic distinctness is enlivened by her stance as a brilliant reader of music and contemporary culture. Or Kulkarni, my favourite modern-day hysterical male, who I appreciate for his spectacle of obscenities and our shared loathing of the bourgeois feigning as the underdog. Art is also found in Karren Ablaze(!), whose reissued zines singlehandedly shows how indifference to your own likability is a necessity of the critic. Or Bianca Valentino, who is from my own backyard and who I know to be astoundingly nice and sincere, and who I further believe is the finest music interviewer around today. And while Scott Creney is admittedly not a household name, I believe, if he keeps writing and makes that ethical sacrifice and publishes somewhere BIG, he will undoubtedly be on par with Simon Reynolds. Finally Everett True, who, granted is not the greatest, nor most clairvoyant critic, but whose perpetual respect and support of women in music criticism is unparalleled.

I suppose this last point (belatedly) gives you an idea of what I mean when I say ‘music writing’ or ‘criticism’. It’s a church of innovation, secret seriousness, cultural awareness and unorthodoxy, where, despite the fickleness of life, music is not something to be taken lightly. Of course someone else may think my version of music criticism reeks of the pomposity and reductivism of an adolescent boy’s declaration that heavy metal is the only genre. Yet to me ‘good’ music writing is Serious (even when it’s humorous) and Important (even when what’s being reviewed isn’t). This is perhaps a cringing sentiment in this postmodern heyday where one can’t innocently speak words like Serious and Important in art, without being labeled some naïve sap.

But if there’s nothing serious or important happening in music writing, then I decree there should at least be something fun. But even fun is largely vacant and I should know particularly well; I’m Australian and down here music tabloids and their ‘writers’ probably outnumber musicians five to one. (This apparently signifies our ‘blossoming’ and ‘varied’ music scene…. Although I shouldn’t sound so bitter because I ardently believe much great music is happening, at a local to medium level, in Australia. I suppose my point is that if you went to any of these main music outlets, you wouldn’t know it).

Modern music criticism is largely a realm of clichés, boring irony and stale artist biography, of which, until I was 19, embarrassingly thought was how music writing always came. It’s a field in which young budding journalists attempt to secure a leg-up in the media world and where ‘writers’, to risk sounding childish and obvious, just don’t give two fat fucks about music other than “A$AP Rocky dropped acid and had three orgies in one night” – which honestly is the most popular article on FasterLouder at the time of writing. Was there something a few years ago when FL were going to revamp their image as Australia’s favourite tabloid site, into a dreamland of Hard-Hitting Proper Criticism? You know, when they got that new logo and Darren Levin took over and let everyone know just how Serious FL was? Did I imagine that? Oh but they all say that, don’t they? Isn’t Rolling Stone still the True Voice of The Culture they way it was 40 years ago? The only difference now is that everyone’s finally grown up and decided that radical libertarians are great in romantic theory, but in reality their influence would be disastrous to everything the middle-class holds dear. The difference is that Rolling Stone, and others, were once the underground. Now they’re the myth of the underground and it’s not that people can’t tell the difference, they just don’t really care to. You sometimes wonder where a whole generation went…

For many music writers, music apparently ‘just happens’ and to that I can say one certain thing: music isn’t an aesthetic that ‘just happens’. Contemporary popular music is the history of modern western civilization, the narrative of class-warfare in England, the disenfranchisement and world-wide appropriation of African American culture, the rise of the multi-nationals, the second and third waves of feminism, the cultural rise of postmodernism, sexual liberation and its envelopment into ‘the system’, the struggle between aesthetic innovation and tradition, the all-consuming desire to be authentic and not really knowing what the hell authenticity even means anymore, the opportunities and oppressions of technology revolutions, the deepening commodification of all life and the transformation of the subculture into the culture.

A thing like that deserves – no… must be written about.

There’s a kind of strangeness to the contemporary music writer then, isn’t there? Understanding that language can’t ever quite bridge the inexplicable experience between sound and listener, so instead retreating to narrating the subjective experience, placing external meaning upon music, and finally watching the rapidity of blogging and the 24/7 internet cycle morph most music writing into, at best, badly enunciated opinion and at worst, tabloid spin primed right from the promoter’s mouth.

So perhaps music writing is a stupid and impossible thing to do. But, and I say this with utmost gratitude, anyone who’s mad enough about music to write about it, probably isn’t all that interested in sensible and possible.