What I did tonight instead of going to see Beaches play live, part 2 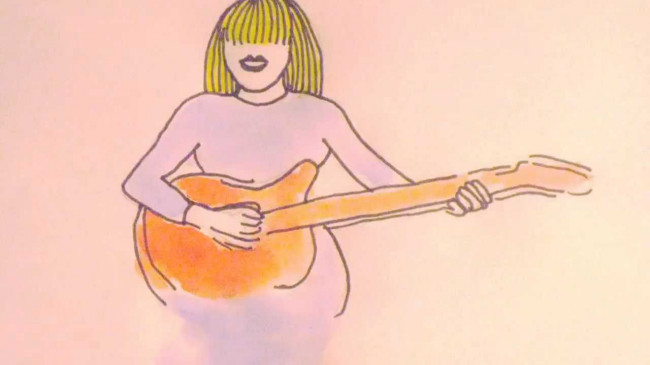 So. After writing the previous entry and listening to the brace of really storming songs from the new Beaches album, I battled against my feelings of paranoia successfully and went to see them play live at the Black Bear Lodge.

I was glad I did.

(Of course I was glad I did. Not least because of what it signified, me leaving the house to venture into the chill, unwelcoming night air.)

I had a good, if somewhat muted-good, time. The place was packed. Plenty of people spoke to me, including some former students and a couple of nervous and/or drunk lads. Made me feel a little less isolated, less pointless. One began his conversation by asking if I’d ever seen a TV show called TV Party. Yes, I believe I have… but man, that’s going far back. So I told him about Comical Funnies, and one particular Peter Bagge strip that featured in the Holmstrom-helmed magazine, about the nervous thrill of attending concerts.

Another lad began by asking me my favourite Australian film. I replied thus:

To which he replied (slightly awed), “Great answer!”

And all the while Beaches played, and ‘though the venue was too full for me to think about pushing through to the front and properly engaging with the music, still it played out as a loud comfort for my beleaguered weary ears, a reassurance that folk like Beaches are still out there playing their trance-rock, their under-stairs blues, their gilded lilies of emotion and friendship, and that’s easily enough for me. Here’s why I went:

And I stayed because I was enjoying myself.

The awesome Bek from Scrabble was there, too. Here’s some of that:

Walking back through the Valley, a drunk girl yelled at me from a car: “I really fucking fancy you.”

Depression 0 Rock’n’roll 1. Thanks to Guy and the band for sticking with me.

What word never gets used about you that should?
“Fragile.”
(The Final Revenge Of… Everett True, Plan B Magazine #46)

One Response to What I did tonight instead of going to see Beaches play live, part 2