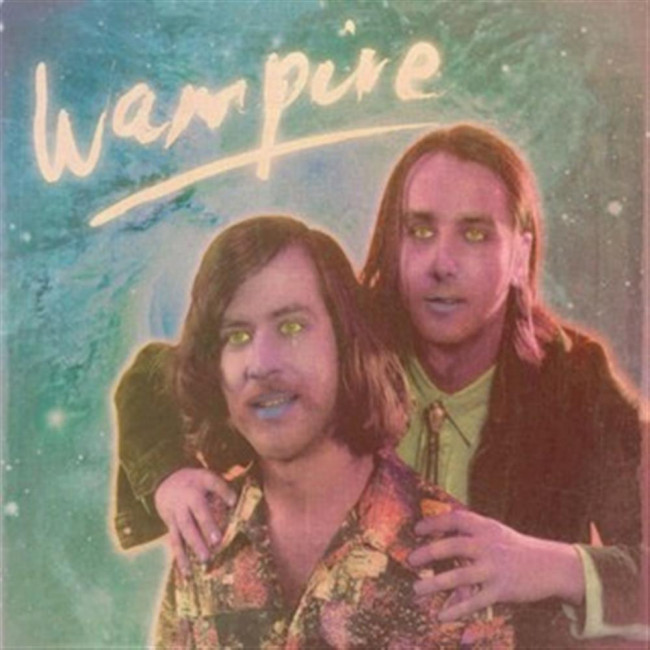 I know plenty of people who will never, just based on the annoying dipshit band name alone, ever listen to this. Wampire traffic in moustaches, stringy hair, wacky outfits, and they live in Portland — there is an entire subset of US humans who are going to roll their eyes, who would rather pay $15 to see these guys get punched in the face than pay $15 to buy this record.

I mean, just look at that cover. Jesus Christ on perpendicular popsicle sticks, how much whimsy are we expected to consume?

And oh yeah, one of them is named Rocky Tinder. Didn’t we just do this with Foxygen?

But here’s the thing. Check out first song ‘The Hearse’. It’s a song of yearning mystery that talks around a subject/secret without ever divulging it. Only Johnny knows what I’ve done wouldn’t mean shit on its own, but taken with the music — its heart-in-the-throat surges coupled with the pauses, the gasping for breath — you can imagine all kinds of not good things happening. A high school quarterback has hired the singer to kill the QB’s abusive stepfather. They ride in the funeral caravan together, two cars behind the hearse. The singer remembers running from the house through the woods, the crunch and snap of leaves under his sneakers, the cold wind burning his eyes, and all he can hear is a screaming hiss in his ears.

Aside from the song’s ubiquitous production, there’s nothing easy, nothing wacky, nothing trendy about it. For 4:40 Wampire has caught a bone in their throat, a Eucharist skeleton. Imagine Joy Divison’s ‘Disorder’ crossed with Ariel Pink.

And even if the rest of the album is kind of a letdown it’s still easy to listen to. ‘Giants’ takes a walk through OMD’s early years without embarrassing itself. ‘Outta Money’ moves with a song-and-dance top-hat-and-coattails strut that sounds like it should be performed by a troupe of animatronic stuffed penguin dancing off the edge of the icy coastal shelf. The minute-long synth drone at the end of the song is the sound of the Earth going supernova. Will the last lemming to leap off the cliff please turn out the light?

I feel compelled to mention that ‘Spirit Forest’ is the worst kind of pointless chilled-out Steely Dan-like meander through nothing.

‘Magic Light’ shuffles wearily off into the distance, closing out the album on a contemplative moment. Wampire uses their pro-tools well. Even as the singer channels Julian Casablancas, affecting the demeanor of the world-weary romantic slut, the band always know their way around the contemporary sounds — even when there’s nothing fresh, at least there’s nothing ultra-cliched.

The rest of the Curiosity is pedestrian enough that you reach the end wondering if ‘The Hearse’ was really that good. And you end up putting it on all over again to find out.

So yeah, Wampire. Next week I’ll be reviewing Rigatoni Bennett. Or Nirvanarama. Or Garanimal Collective or some shit.

One Response to Wampire – Curiosity (Polyvinyl)