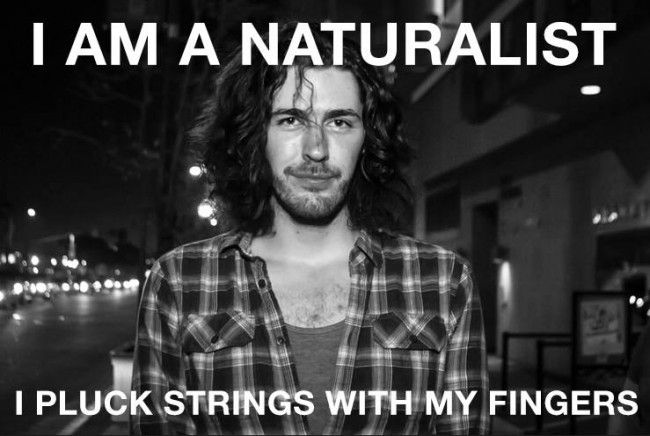 I came to this via Ned Raggett (via Stephen Thomas Erlewine) and I’d like to reprint some of what he (and various friends) said about it on Facebook.

Ladies and gentlemen…the world’s worst article on music, at least this year. AND BEFORE YOU ALL COMPLAIN ABOUT HOZIER SPECIFICALLY (which I have no problem with), zoom out: this is all about the language of describing something as being ‘real’ as opposed to that nasty synthetic pop fluff or whatever else. It’s just another example of how the language of criticism can be preloaded to make something SEEM more legitimate than something else by the right use of buzzwords and fawning context. Any number of acts over the years can and have had similar words written about them precisely because they fit a handy stereotype instead of being one potential path among many. You want rockism, here you go, and it’s trash.

Let’s have a look then.

Nice touch. Always good to have an update time. Lends a certain illusory authority, don’t you think? Seems a bit of an outlandish claim for a man who sings the blues like Elton John, but what do I know? Let’s read on.

Andrew Hozier-Byrne is a titan — musically and literally.

Right. The Merriam-Webster has a titan as one that is gigantic in size or power : one that stands out for greatness of achievement. Literally, huh? OK. We’ll bite. Let’s read on.

Hozier is also 6-foot-5. When he takes the stage at the Lincoln Theatre in Washington, DC, in March, wearing all denim and carrying a guitar that sparkles under the lights, he towers over the other members of his band.

Oh, they mean that kind of titan. Oh. Like a Greek God, in fact. A 6’5″ Greek God. (His guitar sparkles under the lights… imagine!)

A keyboardist, cellist, two backup singers, a drummer, and a multi-instrumentalist on synth and bass join Hozier on stage, but there are no guitar picks taped to the tall mic stand in front of him. He refuses to brush his fluffy mane of brown hair, writes his songs based off a feeling, and doesn’t let a piece of plastic come between him and his chords.

He refuses to brush his fluffy mane of brown hair, writes his songs based off a feeling, and doesn’t let a piece of plastic come between him and his chords.

Fuck no. What kind of inauthentic pop-loving douchebag would let a piece of plastic come between him and his chords anyway? Guilty guitar picks ain’t got no rhythm.

He’s a naturalist. He plucks the guitar strings with his fingers.

Ah, good to have that reaffirmed. Isn’t a naturalist… oh, never mind.

He’s not a natural fit for the Top 40, though. “Take Me to Church” is a slow song focused on homophobia, and Hozier’s set is lit with electronic candles instead of pulsing strobes. He’s not a pop star, but he’s made a home on the charts with artists like Taylor Swift, Nicki Minaj, and Ariana Grande.

…because all Top 40 artists light their sets with pulsating probes? Wait. Stop. I’m confused. He’s not a pop star… but he’s made a home on the charts? What precisely is the point here?

In some ways, his success points the way to a best-case scenario — in which his popularity represents the future of music and the Top 40 has room for all genres and tones and talent.

Well, that really is a best-case scenario, isn’t it? Because Grohl alone knows that pop (spit) artists like Taylor Swift, Nicki Minaj, and Ariana Grande are devoid of tone and talent. It’s what the world needs, you understand? Another white middle class guitar-player playing the blues. So superior to the existing model.

Hozier isn’t a hit machine. His debut, self-titled album is solid top to bottom. In its entirety, it tells a brutal story of life and love and religion. But it doesn’t sound like the albums dominating the Top 40 right now. There’s not a single synthesizer present. Most of the songs are meaty, desperate, and honest about the world we live in.

Well, no one is a hit machine literally. But, uh, he has had hits, right? Nice to encounter an album that is solid top to bottom. That’s really a prerequisite when I go searching for some listening pleasure to add to my Coldplay and Mumford & Sons albums. “Yes yes yes, it might be the Pazz Critics Album of the Year, but is it solid top to bottom?” And does it contain some meaty, desperate honesty? And please, NO FUCKING SYNTHESIZERS!

Raised on the blues
Andrew Hozier-Byrne grew up in Ireland listening to his parents’ records, mostly blues. His father was a blues musician, and so Hozier was brought up amid the wilds of the Irish countryside and the sounds of American music.
“I was raised with a lot of blues music around, and then when I was older, I just had an affection and a connection with blues music and the music that’s associated with it — jazz and soul and gospel music,” Hozier says. “I always come back to blues music. It’s kind of my first love. “
At the show, he clears the stage to play James’s 1931 song “Illinois Blues.”

That’s seven mentions of the blues in under 100 words. This is one fucking bluesy musician.

Wait. Stop. His popularity represents the future of music. Popular but not pop. Whoa slow down there. You are quite literally blowing my mind with your inspired reuse of Nickelback-level clichés.

Here’s Dan Perry: “Haha I was just about to riff on the titan sentence; Gaia and Uranus must be so proud”. Thanks Dan.

…for all the richness of his throwback sound, it feels like something new, something unclassifiable. Is he modern blues? Is he gospel? Is he the future of rock?

Or is he just a pile of reheated dogshit left off from the last Van Morrison cover shoot? I don’t know. Why don’t you tell us?

Here’s Dan Perry again. A keyboardist, cellist, two backup singers, a drummer, and a multi-instrumentalist on synth and bass join Hozier on stage … [a few paragraphs later]… his debut, self-titled album is solid top to bottom … there’s not a single synthesizer present.

Though he has only released one full album, he says he’s not interested in creating more hits just to have hits — he wants to create songs that matter, and move, and change people. And those songs are built of his words and his voice.

His somewhat gravelly, slightly twangy Irish vocals make all of his songs identifiably his, despite how much they seem to vary in genre at times.

“I think Top 40 radio is getting a bit more adventurous now, and I think a lot of that is due to guys like Sam Smith and Andrew,” Justin Eshak, who signed Hozier to Columbia Records in the US in 2013, told me.

By playing songs by blues legend Skip James and Ariana Grande in the same set, Hozier proves he’s more than a one-hit wonder.

As Howard Jones once nearly sang, “What is logic anyway/Does anyone care anyway?”

Before he played “Someone New” at his DC concert, he prefaced it with some context. “This is a love song,” he said. “It’s about love at its most empty and vacuous and futile.”

He then turned his head sharply to the left, yelled “MOM SHUT UP, YOU’RE RUINING MY CONCERT!” and ran off the stage, pages of angsty poetry falling from the confines of his black Trapper Keeper with the puffy skull stickers on it. (Dan Perry. Again.)

As opposed to a musical Titan with features like Your Anus and Atlas like Mr Hozier, presumably.

As Joel B Martin summarises,

Aside from the clear fluff, the rhetorical structures to pump-up rather than down – I’m not surprised to discover a possible overstatement of talent which is essentially free advertising for a newer artist in the milieu of too-much-information-lacking-wisdom. Who is to blame? The drivel created for exposure by an “authority” other than the artist? Or the market that won’t respect the artist who isn’t endorsed by someone of reasonable note to thus be taken seriously in the first place by that market? One thing’s for sure – if you’re newer to a scene, you’re desperate for the perception of legitimacy within it.

And, as Erlewine points out,

It’s a new development in rockism, to claim that a guitar pick isn’t pure.

One Response to Vox on Hozier | Music criticism isn’t dead, it just tastes like shit