Two reviews of Sam Smith (SPOILER ALERT! I didn’t like him) 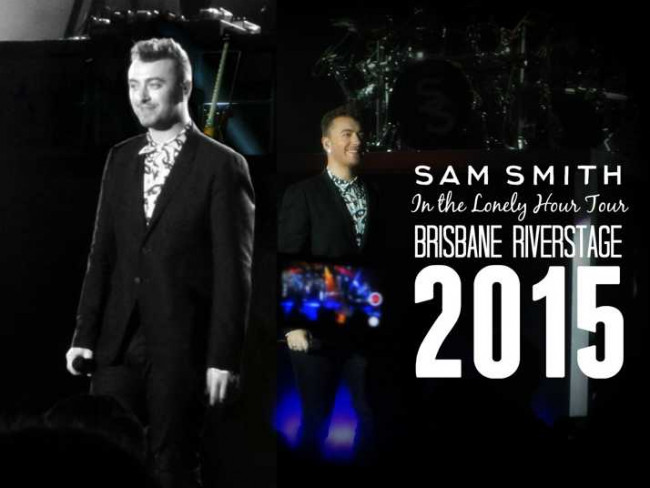 Here’s the first one.

As the Wall-Street Journal explained, it’s a type of ornamental note that clashes with the melody just enough to create a dissonant sound. “This creates tension in the listener,” wrote Dr Martin Guhn in a 2007 paper on the subject. “When the notes return to the anticipated melody, the tension resolves, and it feels good.” And (as the WSJ suggested) when several of these appoggiaturas occur next to each other… this is when the tears can start to flow.

Sam Smith’s music and singing style is littered with dozens of these appoggiaturas, often within seconds of each other. Indeed he relies upon them so much, it sometimes feels he’s forgotten to write a song to match. This, depending on your perspective, is a wonderful gift. Certainly, my Facebook feed was submerged by disbelieving students after I offered up my plus one for tonight’s (sold-out) show. “But tickets are going for $300 each!”

Screams.
A poppy flashes up on the giant screens either side of the stage.
Thousands of mobiles flash in trembling anticipation.
Lights strobe, the band walks on.
More screams.
A voice sounds from stage back, trembling and lovelorn, tentative but growing stronger with every note. “You’re the drug that gets me through.” A face appears on the screen, smiling, doe-eyed and a little wistful. Sam Smith walks on stage.
The screaming grows louder.
Life Support reaches its teary-eyed climax, “Can’t you see that I am yours? So will you be my life support?” Smith hiccups soulfully as thousands upon thousands of fans provide vocal support.
The screaming peaks. The slightly bombastic Disclosure collaboration, Together begins. Smith smiles shyly. “Brisbane, how are you?” he asks. Like he needs further assurance – as he tells us, tonight is special for two reasons. First, it’s his first ever show in Australia (cue screams) (it isn’t, actually: he played Splendour last year) and second, he’s just heard his album has gone to Number One for the first time (cue more screams).
“Are you ready to have a good time?” he asks. “Are you ready to sing along on every single word with me?” Like he needs to know.

Yes, it’s Sam Smith. Blue-eyed great white hope. Grammy nominee. Modern-day soul like Adele and Ed Sheeran and James Blake and all those other Brit artists. Faultless, in a way. Nothing to be upset by. They’ve all got such great voices. So authentic, so real – it’s great to hear some genuine music back in the charts, right? Music that gets by on its own merits.

(An early review of tonight’s show runs, “With all the production of a record pulled away, it was just Smith and his voice.” Right. Just Smith, and his voice, and his three backing singers – black, of course – and his backing band of five musicians, including synths.)

All hail the new Duffy.

It’s interesting to listen to how pop stars interact with their audiences. When Lady Gaga played Brisbane last year, she kept reading out notes from her fans that reaffirmed their devotion to her, and how she’d changed their lives. When Kylie played the BEC, she was down-to-earth, clearly delighted by the response, and clearly impromptu in her responses. Tonight, Smith – now worth £12m, apparently – exhorts us to wave our hands in the air, and states several times how honest and sincere he is.

Before I’ve Told You Now (the embodiment of stars practising their scales, rather than writing tunes), he says, “Before I wrote this album I had a very warped idea of what I needed to do to get famous. Thank god I started writing honest music. The truth is people only started listening to my music when I started being me.”

How does he know?

Before Money On My Mind he says, “This next song is literally the only song on the album that’s not about love… Because writing songs isn’t about money for me, that’s all the wrong reasons and unfortunately while I was writing this album, I met some people who are writing music for all wrong reasons.”

He’s pretty uppity for a guy who’s basically filling in space until the next Dido comes along. Smith has two good songs (Stay With Me – performed as the final encore tonight of course; and the Beatles-esque I’m Not The Only One) and one of those isn’t even his and the other one only sounds good because of the canny way it evokes Gnarls Barkley’s genuinely stunning Crazy.

Before a suitably authenticity-drenched Latch (just Smith and a very ornate piano-line), he says “I was sick of hearing songs on the radio I couldn’t relate to and so I decided to write my own.” Authentic songs, you understand. Songs without any studio or live trickery… uh, except for the eight other musicians up there in support of Smith and those horrible soft rock synthetic guitar solos that sporadically break out.

“This next song I wrote after I finally deleted the guy’s number off my phone. I didn’t want to do anything but my team said I had to get into the studio and I’m so glad I did.”

Man. Don’t ever cross Smith or you’ll be hearing about it for the rest of your life. Also, team? So lovely and polite and heartfelt (Smith’s debut album In The Lonely Hour is written about all the lovers who rejected him), he has a look and style that could fit right into a London management consultants. He mentions how he got his first manager at the age of 12. That doesn’t make him sound any more authentic or real.

“I want to see every single person clapping their hands.” Sorry Smith, it just ain’t going to happen.

On the way home, I got pulled over – doing 55 in a 50 zone. The police officer let me off with a caution. “Don’t ever let me catch you listening to Sam Smith again.”

That’s unexpurgated version, sent across to The Guardian. I had an exchange of emails over it with my editor, who felt it was unusable in its current format – too long (which I knew already) and also too personal. (The Guardian prefers to present balanced, argued reviews that don’t feel like they’re settling personal scored. My editor then turned round a quite brilliant edit, which you can find here. If nothing else, it’s an excellent example of how to precis.

It’s interesting to compare the two reviews, clearly written by the same person but oh so different in tone.

Shortly after The Guardian review appeared, Smith cancelled the rest of his tour due to a hemorrhage to his vocal cords. “I have been vocally exhausted for a while now,” he stated. I do hope the bad review and the cancellation aren’t connected.