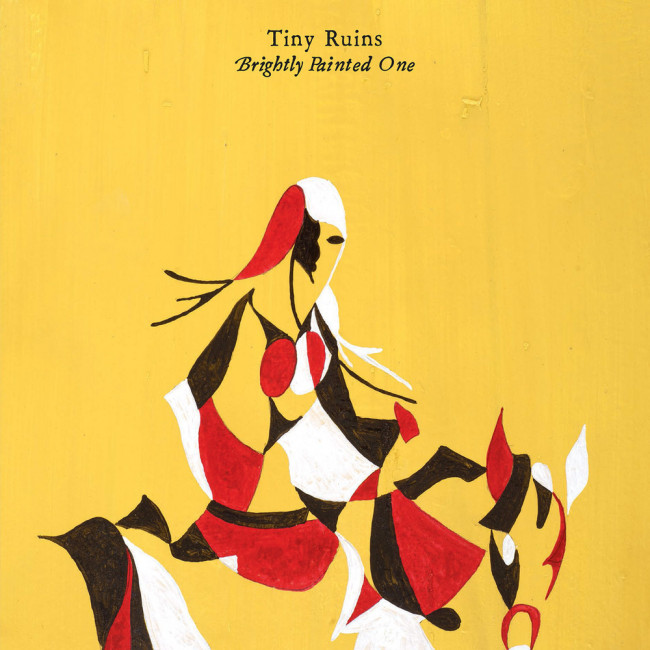 [READER ADVISORY WARNING: The following review does not reach a clear conclusion about the album in question and might disturb some audiences. Viewer discretion is advised.]

Why aren’t I crying?

I ought to be. The writing’s on the wall. No, not because of this LP. Not at all. Tiny Ruins is so grey in its melancholy. Not like the tripping, halting lightness of Cryptacize, or the dainty spring of Vashti Bunyan, or the sassy mellow twang of Judee Sill, or the gentle yet commanding Joni Mitchell –

No, I lacked all this context at first but now it’s clear – and I’m sure, as I peddle backwards, will be clearer still – that Tiny Ruins, whoever she may be, has a much dimmer, less distinct character than those before her, with only woeful poetic verses and singular strumming. And she still sounds a helluva lot like Nick Drake, in spite of being the opposite gender and whatnot.

But I should still be crying. Even if the song about winter gardens and museums sounds still so blasé and out-of-place, and the line will you build me an honest bridge rings hollow in my ears, and the song that begins daisy-taker, chainmail maker puts me off at once with its rosy tinted picture of the Old World. Even though “She’ll Be Coming ‘Round”, which precludes its own cliché, descends in a graceful lilt.

It’s not the music. If I heard “Night Owl” in a café – for the whole of Brightly Painted One would suit the coffee shop ambience, alongside acoustic covers of Dave Matthews, though admittedly way less whiny and pathetic – I wouldn’t think twice about it. If Tiny Ruins actually performed in said coffee shop, I’d probably try and watch for a little while, then shove my nose back down into the book I was reading.

Right now, though, I should be bawling. I can never say it. Love for its own sake / does not a marriage make, says Nedelle of Cryptacize. But what is love? Or, rather, where is it, on the sliding scale of companionship? How can all these singers be so sure? I’ll never say it. But the writing’s on the wall and before long it’ll never be said. And the more I deny it, the more I doubt myself.

And now Tiny Ruins is on the stage again, and this time she sounds like a saint –

On the one hand, I want to dissect this sucker, scoff at the stupid dichotomy she’s pulling here, that age-old assumption that passion and reason are mutually exclusive, and furthermore the even worse assumption that men are the reasonable ones and women must seek their logic –

– but on the other hand, the female protagonist in this story asks outright to said reasonable man “Will you be mine?”. That takes guts, y’know. Once you say that, you’ve thrown yourself on the thinnest, highest proverbial limb possible, and if the other person doesn’t bring a ladder, then it’s down down you go. He’ll be up there. You’ll be down there. Doesn’t matter how long you’ve known each other. And here, for this one song, Tiny Ruins gets that. She captures the quiet moment that the branch snaps.

It’s the moment I fear. The reason I can’t say it. Perhaps it’s better off that I don’t.

Now “She’ll Be Coming ‘Round” is on again, and I think I am going to cry. Don’t. Stop. Stop being so singularly beautiful and resonating. But she won’t. And the tune lifts itself, and builds to a soft but steady focus, a thundering energy I must’ve missed before. No. Don’t slow down. I’m really going to cry now.

Um. Wow. Who invited that trumpet player? I thought I’d worked myself into a real sorrow, but “Straw Into Gold” is hopelessly gaudy. Skip that one. There. The closer. Leave us be. Close the door on your way out.

OH FUCK WHY CAN’T I CRY

It’s no use. You can come back in. She mentioned the word “forgery” and I think of a dusty blacksmith’s forge. I thought Tiny Ruins could understand, but she’s off writing purply prose about white sheet lightning dreams. Thanks for nothing. That leaves me with the same murky dread that I started with this evening, and back alone again save for the skinny black bugs that steal into my room and squirt white pus with a crunch when you squash them.