The Year I Officially Became The Bride of Jesus: How and Why I Cried My Eyes Out Watching Nick Cave and the Bad Seeds 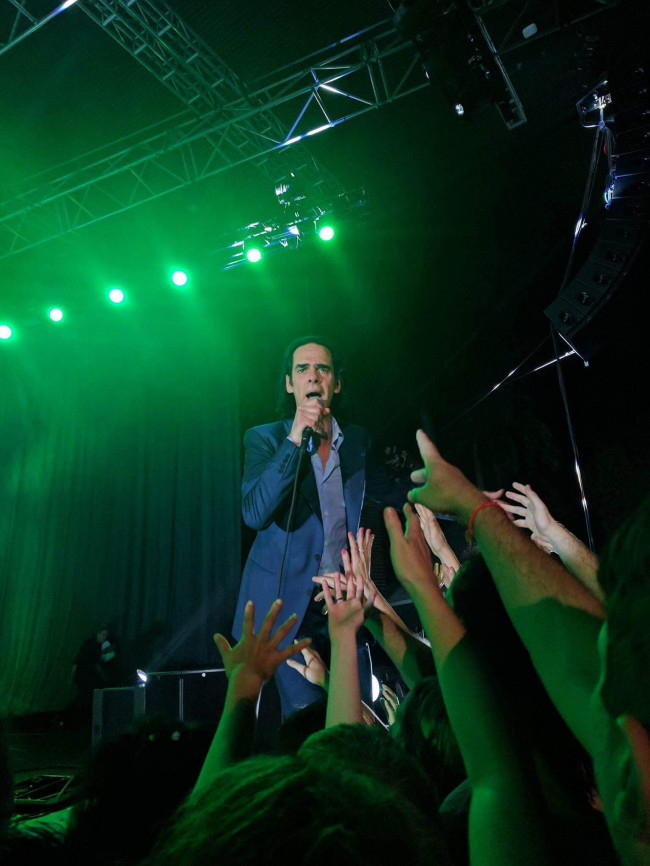 After not cutting my hair for a year, I started hearing that I looked like Nick Cave. These comparisons only became more frequent when I began singing in a baritone. When I started dating a girl whose family idolised the man, the comment became a compliment.

Last year when Nick Cave’s son died, it felt as though all of Australia had a lump in their throats for a solid week. The resulting album was crushing. As the night of the 25th approaches, I prepare myself mentally for something very very heavy. What happens, surpasses my expectations.

The Necks are a hilariously fitting opener for the band. With no knowledge of the trio, I am briefly pre-gamed by an acquaintance who mentions the words “jazz”, “avant garde” and “twenty minute songs”. Planted firmly downstage centre, the group seem like the coolest dads at the high school choir recital. They play an hour-long song, a cacophonous nightmare soundtrack that sounds like the Grim Reaper’s rendition of Radiohead’s ‘In Rainbows’ album. The end of their set is a rude awakening for the 500 odd people who had been lulled into a trance-like state by their droning.

Being on the barrier, we are warned by a stage manager type that Nick will be very much in our face for the duration of the show. We nod in faux solemn understanding, as if that would ever elicit concern.

Right on time, The Bad Seeds spill onto the sparse stage. All six of them wear black suits, although their shirts, ties and jewellery were left to preference, as proven by the combination of lairy silk shirts, and one ribbon bow tie. Warren Ellis could be Michael Gambon’s stunt double in the later Harry Potter films, and looks like he would burn incense on a plane.

Barely a minute into the intro for ‘Anthrocene’, Nick himself slips onstage. Dressed in a swish navy blue suit, he manages to be spidery and statuesque at the same time. Sitting on a leather chair centre stage, he prognosticates, as much speaking through gesture as through words.

‘Jesus Alone’ creeps up on the crowd – a half-awake lullaby that never quite hits the crescendo one would expect from the undulating synth waves hanging in the background. There’s a pause for a moment as the song ends, and Warren sits at the piano to draw out the opening refrain of ‘Magneto’. We know what’s coming.

Nick looks to the packed hill in front of him, glassy-eyed and pale. He begins, drip-feeding grief to an audience whose stomachs have all collectively dropped.

It was the year I officially became the bride of Jesus

I feel a mixture of nausea and expectation, like I’m on the top of a rollercoaster. For a brief moment I panic that I won’t be able to cry, that instead I’ll be trapped inside myself, unable to express the crushing empathy I feel welling up inside of me. As if picking up on this, Nick makes his first move into the crowd as he shares the chorus with the front rows.

I lose it. Hysterical blubbering like a child. I can’t remember the last time I cried like that. I think of dead relatives, and Aristotle’s definition of catharsis being a purging of sadness and pity from the body. Light-headed from crying, The Bad Seeds show me no pity, transitioning straight into ‘Higgs Boson Blues’. The tears continue. I become genuinely worried that I’ll pass out from exhaustion – or dehydration, whatever comes first. A very sweaty Nick weaves a dig at Brisbane into the lyrics of the song.

I ask myself the same question as I take a few deep gulps of water from the bottle I had stashed in my pocket.

If I die tonight, bury my in my favourite yellow patent leather shoes.

I want those shoes. Nick stands directly in front of me, but it doesn’t feel right to touch him. I feel less like a rabid fan and more like a parishioner. Next, a change of pace with ‘From Her To Eternity’. Nick is visibly making an active effort to psych himself up. As the chorus hits, he’s no longer a grief-ridden elder statesman – he’s Nick, manic goth boy from The Birthday Party. He’s intimidating, yet inviting. He maintains this frenetic energy for the remainder of the night.

‘Tupelo’ sees Nick become a preacher. ‘Jubilee Street’ becomes a new favourite, with its mournful grunge flow that is kept interesting by its uneasy time signature.

‘The Ship Song’ is chanted along by a crowd of warm, drunk punters, like at the rugby, but more sentimental, and only slightly less homoerotic. Speaking of sentimentality… Nick makes a pilgrimage to the grand piano and begins to play ‘Into My Arms’. This was the first Nick Cave song I ever heard, and I’d say it’s probably the most well known. It was also a pretty special song for my ex-girlfriend and I. We were lucky enough to be able to hold on to eachother as Nick played. It was just as special.

‘Girl in Amber’ and ‘I Need You’ serve as excellent palate cleansers before ‘Red Right Hand’ hits like a headache, with Nick mincing around the stage like The Grinch. As the song explodes for a final time, Warren looks like the Fiddler from Fiddler on the Roof in a Baz Luhrmann fever dream. I wonder to myself how many violins he goes through each week. He’s gotta have spares.

‘The Mercy Seat’ feels like a rallying cry. It must have worked, because two tattooed dickheads attempt to push in front of me. I hold my ground, as two other men who have flanked me for the entirety of the show push them back, allowing me to slip forward, so that I am front row, centre.

‘Distant Sky’ begins, with Nick sitting at the piano once more. A few moments in, the screen behind him illuminates with the image of a woman (who I would later learn is Else Torp, Danish soprano). Her voice floats serenely, and I can’t help but shed another tear as I think of Nick’s son, and I know I’m not alone in this. Else’s words serve as a heavenly counterpoint to Nick’s grieving

“They told us our Gods would outlive us / But they lied”

With a wry smile Nick ends the song, making communicative gestures to side stage. “We’re allowed one more song. There’s a stupid fucking curfew. The venue charges you thousands of dollars for every moment you go over. Write to your local… whatever you call it.” ‘Skeleton Tree’ comes on like the credit sequence of a really heavy film. “And it’s alright now.” sing The Bad Seeds, sings Nick, sings the audience. I think we’re all trying to convince ourselves of exactly that. When the song ends, Nick informs us he’ll play ONE more song, shooting the stage manager a look as if to say “I’ll cover the excess. I’m Nick Cave.” The bald, be-headset-ed man relents.

Nick steps downstage to the barrier. To my surprise he locks eyes with me and asks, off-mic, “what should we play?” Overwhelmed, but somehow very sure of myself, I reply “STAGGER LEE!” “What?” he asks. “STAGGER LEE!” I notice the man next to me has joined in, with a smile as wide as mine. Nick processes the information for a moment, and puts the microphone to his lips. “Stagger Lee?” he asks the crowd. We roar in response.

Nick swaggers his way through the final song of the night, a sauntering cowboy poet who has sweat through his navy blue power suit. Forgetting the odd lyric, the crowd has no qualms with reminding him of the words as the band vamps in the background. As the song breaks down, the Bad Seeds each go completely mental. With a ringing in my ears and a pounding in my head, it’s finally over. I feel elated, cleansed, and like I’ve just been a part of something weirdly cosmic.

Nick Cave is a man who has flirted with tragedy, darkness and heartbreak his entire career – he has in fact built that career on his black imagination. It’s some form of sick poetry that he should endure something as wholly personality-destroying as losing a child. It’s either Shakespearean or just really fucking shit. It’s probably both.

Listening back to his most recent album in the days following the concert, I remain dumbfounded. This album, and Nick’s performance on the 25th, was the meticulously workshopped, beautified version of his grief. I am physically incapable of comprehending how he must continue to feel every day, but I take solace in the fact that he has found relief in expressing it through music, which is what made the night truly special.

That and I got to hear him say the words “fat boy’s asshole” live.