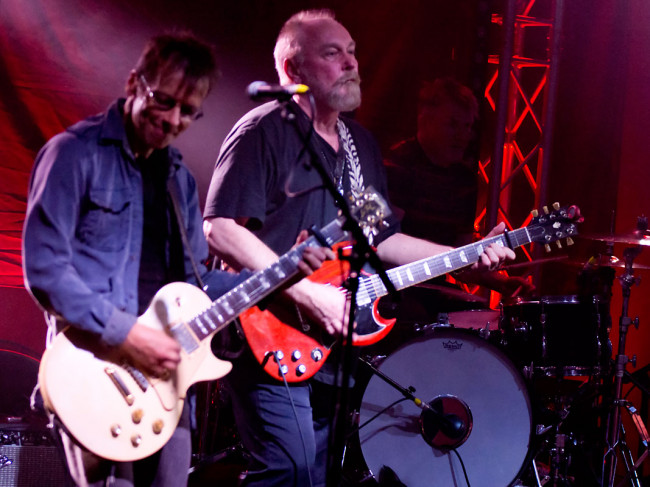 Playing your biggest hit/best known song more than once during a show is never a good thing.

When The Undertones nonchalantly play ‘Teenage Kicks’ as their tenth song, it’s perfect. It’s a true punk rock moment. Guitarist Damian O’Neill dedicates it to someone in the crowd before being reprimanded by singer Paul McLoone for the lack of pre-song build-up.  Typically when an act plays their biggest song more than once in a show, it’s because they don’t have enough material to fill out a set.  Given that the band play another 22 songs after Teenage Kicks before giving it a final, end of night repeat, it obviously isn’t true in this case.  Playing ‘Teenage Kicks’ so early in the set is a real sign of intent.  It boldly states, “You might know this one, but we can casually drop it somewhere nearer the start of the night than the end because we have all these other killer songs’.

As current caretaker of Collapse Board, I always feel a slight sense of guilt (or maybe it’s shame) that I keep going to see reformed nostalgia acts who are, for the most part, made up of grey haired men.  I know it doesn’t fit in with the MO that Collapse Board works to or fit in with all the collective manifestos for what we are about and what we stand for.  But as a complete fanboy of live music and music photography, I’m always happy to go and see anyone.  The nostalgia circuit is omnipresent and it’s hard to say no when there’s the opportunity of a night out with live music.  However, as is often the case, one major criticism has to be that when you put on a night that features 13 musicians playing on stage and they’re all male, you really need to be trying a bit harder when you’re putting your bill together.

The Undertones are not a band of my generation, although ex-lead singer Feargal Sharkey’s ‘A Good Heart’ is an undeniable memory of the 1985 and that most important of times, when you hit the ripe old age of 13 and music starts to move to the foreground of your life. They’re one of those bands I know by osmosis via a smattering of classic hit singles – ‘Teenage Kicks’, ‘Jimmy Jimmy’, ‘Here Comes The Summer’, ‘My Perfect Cousin’.  It’s the same with many of these older / reformed / ’classic’ bands I go and see.  But compared to these similar, same era bands, The Undertones are miles ahead of the pack.

There’s something astonishingly contemporary about the songs the band plays.  They sound fresh and don’t sound like they belong in a period several decades ago.  It’s something more than just being nostalgia, even if most of the audience is old enough to have experienced the band first time around.  If a group of twenty somethings came up with a handful of tunes like this, the music industry would be all over them.  The two minute songs written as teenagers are still those same two minute songs.  They haven’t been extended or rearranged or slowed down to prove that they’ve become all serous with age.  A song ends, the next one starts up straight away, often with barely an introduction, and it’s all at an impressively breakneck speed.  Other than ‘Julie Ocean, there’s nothing you could call a ballad.

Much of the success of the night is due to drummer Billy Doherty.  He’s got a compression bandage on one wrist, he grimaces his way through each song and his already ruddy complexion becomes more flushed as the night goes on.  There’s a simplicity to these Undertones songs but there’s also something brutal in the primacy of their execution. They’re not subtle songs and Doherty’s snare drum is the driving force.

Having asked the question on Facebook and with the promoter posting up photos of the soundcheck, the appearance of Ed Kuepper for the band’s cover of ‘This Perfect Day’ hasn’t exactly been a well-kept secret.  There’s something strange about the moment as normally the generations that grew up without mobile photo are exemplary when it comes to being able to watch a show as it happens in front of them rather than via a phone screen.  For these two and a half minutes the air is filled with mobile phone capturing this once in a lifetime moment.

They don’t need to play ‘Teenage Kicks’ twice.  How many times must they have played that song over the last almost four decades? And yet when you watch a band who clearly love what they’re doing, it really shows.  Watching the band in these final two minutes, it’s like watching a band playing a song for the very first time, like a band in their very prime. It’s majestic. Perhaps this is a very rare case of when playing your best known song more than once in a set is a good thing.