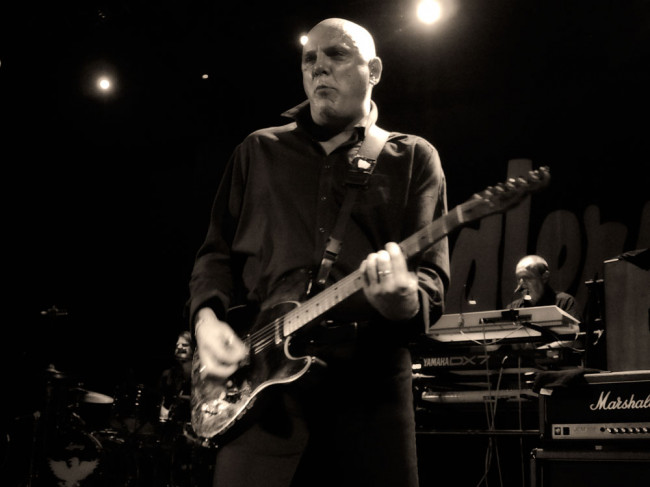 It’s been over a decade since I last saw legendary punk outfit The Stranglers play, so it’s with keen interest that I rock up at Melbourne’s Corner Hotel to see them in their most recent incarnation. The gig is a sell-out, the crowd mainly middle-aged men. I wonder how many used to sport mohawks and tartan back in the late 70s-early 80s.

The band, all dressed in regulation black, appear to a measured cheer and open with a short taste of ‘Waltzinblack‘, leading into an oldie-but-goodie in ‘Toiler on the Sea’. The two original band members, Jean-Jacques ‘J-J’ Burnel (bass, vocals) and Dave Greenfield (keyboard) bring the Stranglers’ sound to life with trademark heavy bass and fluent keyboard trills. They are rhythmically well supported by Baz Warne (guitar, lead vocals) and Jim MacAulay (touring drummer). Warne tells us how they love Melbourne, especially to play the Corner Hotel’s ‘small’ room. He has frequent banter with the crowd, ribbing the hecklers and ‘the guy in the Black Sabbath t-shirt’. Burnel interacts with his fans from the outset and seems to genuinely enjoy a chat while playing.

Admittedly I’m here for their early stuff, and I’m pleased at how many songs from their first four albums, including iconic debut Rattus Norvegicus, make it into the set. Their almost-40-year catalogue is well-represented, particular highlights being ‘Nice ‘n’ Sleazy’, ‘Peaches’, ‘Duchess’ and ‘Hanging Around’.

‘Golden Brown’, the song that heralded their move from their punk roots into the mainstream, is a treat. The offbeat bass and harpsichord are great, but I can’t help missing the vocals of original singer, Hugh Cornwell.

Mid-80s hits, ‘Skin Deep’ and ‘Always the Sun’, excite the mainstream radio ‘Hits and memories’ fans, and there is a spate of chorus singalong and fist pumping.

To our surprise, the encores showcase two covers (both commercial successes for the band) – Bacharach’s ‘Walk on By’, and The Kinks’s ‘All Day and All of the Night’. Both are enthusiastically received, as is their own classic ‘No More Heroes’.

The show finishes on a high with promises from the band to return, and a collective fist-pump from the crowd.

It’s been good to see them perform live again; they remain tight after 40 years. Warne has cemented his place as a credible frontman moreso than last time I saw him, shirtless at the Prince Bandroom, over a decade ago. But Burnel and Greenfield really maintain the original Stranglers sound, which is, after all, what I enjoyed most.