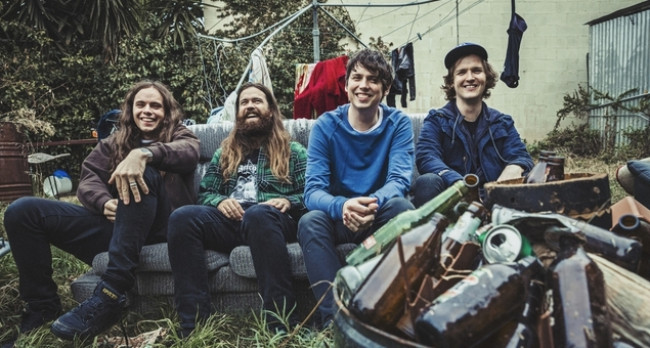 Nothing’s more obnoxious than the sight of young people enjoying themselves, unless it’s the sight of young people enjoying themselves in pretty much the exact same way you used to enjoy yourself when you were their age. Violent Soho are filed under ‘grunge’. Would I have liked ’em back then? Alcohol and largesse meant my taste wasn’t as discriminatory – or perhaps it was more so? – but even so I reckon, yes. The type of grunge I didn’t enjoy was the suburban metal masquerading as ‘punk’ or 60s garage – all those Steve Harris triplets (as Mark Arm once memorably remarked to me… until about five seconds ago, I’ve never known who Steve Harris is) and fucking extended guitar solos. Not punk. Not garage. Just more male wankery. I don’t like the screaming post-Plant vocalists either (me old mucker Cornell excepted… but he was a mate). I always did like a spot of distortion, some melody, though – as provided here. Sure, Violent Soho are a little slicker than I like my music these days – certainly when it comes to rock music, anyway – but fuck. Sure, I’d have liked this. Reminds me of Lotion or Cell or one of the undersung cousins of my Seattle brood. With plenty of radio-friendly melody attached.

Of course I’ve been aware of Violent Soho for years… I have a feeling they might even have made it onto one of the CDs I compiled for Plan B Magazine or Go Magazine back in ’08. I liked their feel and groove fine, but found myself always a little suspicious – like they’re too obvious for me to like (which they kind of are). I thought it was a trifle strange Thurston signing ’em to Ecstatic Peace seeing as how it was really fucking obvious who their main influence was: Thurston Moore himself. So I kind of switched off, far as Violent Soho went – plenty of great fucking rock bands from Brisbane around, most of whom are way weirder and rock harder. And didn’t the Soho move away several years back?

Much as I like the way J. Mascis sings, I don’t need someone from Brisbane singing just like him. Or maybe I do? Australia has ALWAYS been about the grunge, way before Steve Harris ever dreamt of playing any of his damn triplets.

I never did understand the skaters, though.

But you know. Fuck it. I saw a Violent Soho T-shirt (with hotpants, natch) at the cinema last night. It made me happy to see it, a brief glimpse of a world outside the chrome and green. A few minutes ago, I went on Facebook and asked folk to recommend me some Brisbane sounds – first out the blocks were Violent Soho, of course. Damn it. So I thought, let’s not be snobby, let’s give ’em another listen. So I did. This single is from 2014. And you know what? I fucking like it.