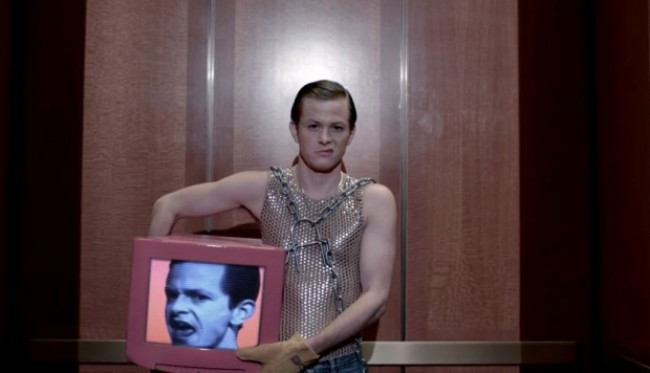 Scratch the heart of any Pitchfork reader and you’ll find a Bowie fan.

As I was flipping through the channels, quite by chance, I came upon the start of his video and after hearing a few bars of it, I was completely hooked.  It took me back to when that picture of me was taken, back in the mid 80’s.  I was struggling with keeping my sexuality under wraps, as they were still throwing us out of the military for being gay and we all also found ourselves wondering if tomorrow would be the day we launched our ICBM’s at them or they at us.  Also, there was a “gay cancer” that was just showing itself.  Anyway, nice to see that the future is in capable hands. This song hit me like a ton of bricks and that is impressive.

I watch this video a lot, and that’s because I really connect to it and the message it is portraying. Being gay, and especially being flamboyant, can be an act of rebellion just within itself. It’s a big “fuck you ” to heteronormativity. It’s like you think I’m a faggot, you think I’m a fairy, but you’re afraid of me. I make you uncomfortable. Well, be afraid, because I’m not changing for you. This is what I’ve been saying. If you wanna wear heels, if you wanna wear makeup, do it. Don’t try to blend in if that’s not you. If people hate you for it, fuck them. If gay men don’t find you attractive for being effeminate, fuck them. You don’t need that negativity in your life. Embrace your faggotry. It’s a gift, take it, embrace it, work it, allow yourself to shine.

If you think pop music is just about the music then sister you are in the wrong game.

Superb!! I’m hearing some Gary Numan and Deerhunter in this.

all most speech.less thank the gods and demons for this man and his music.  beautiful painful lush sexy gifted terrific artist man

You don’t need a sex monitor. Don’t forget it.

The man is dressed like Elvis, who was the King.
Sailors used to hide contraband in hollowed-out sections of their wooden legs,hence the phrase “he drinks like he has a wooden leg”, as if they were putting the drink in their leg.
The king is hiding a secret, the secret being, that he is a queen.

One Response to The return of Everett True | 84. Perfume Genius