The return of Everett True | 79. The Phi Mu Washboard Band 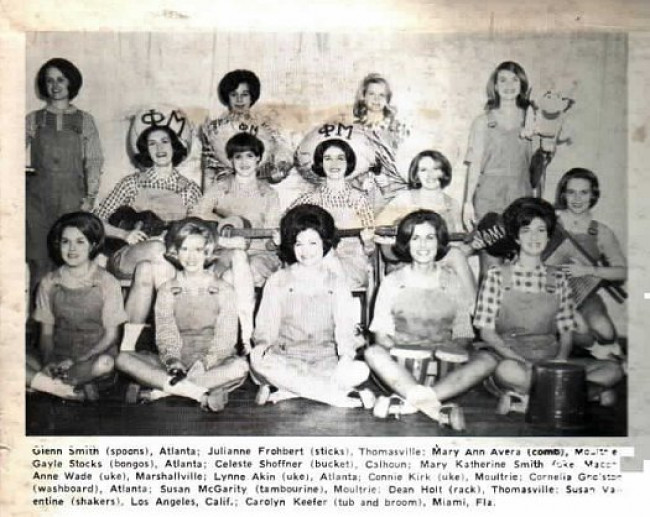 And I trust Stephanie Goodman.

The charm of this lies much in the way it is in no way overstated. Indeed, in its gentle love for music and reckless willingness to try its own hand at same, it reminds me of Langley Schools Music Project. There’s the same wide-eyed naivity. The same wonderment.

I don’t want to say more, just play the damn song. Play it. Play it.

This is my latest “find”. I’m still digging through the piles of things I bought at the last ALS sale, but this is by far the best thing I’ve come across yet.

I don’t know much about these singers, aside from what it says on the album cover, as well as what the hairstyles tell me about the likely era that it was recorded (early ’60’s). It’s by the Phi-Mu Washboard band, an intreped band of young women from the south, who got together as undergrads at a school in Georgia (probably Athens), and apparently became quite a big hit, for a time.

As you may be able to see from the picture, the featured instruments on this album include spoons, sticks, comb, bongos, bucket, uke, tambourine, shakers, tub and broom, and, in a unintended double entendre, “rack”.

I enjoy most of the tracks on this album, such as the brief version of “This Land is Your Land”, and the longish arrangement of “Mama Don’t Allow”. But the real winner, and an immediate all-time favorite of mine the moment I heard it, is this abridged version of “Love Hurts”. I especially adore the inflections near the end of the chorus (i.e. “holds a lotta Rayne”).

That whole 365 Days Project website seems to be quite something. A treasure trove of what might be in other years called Outsider Music, and pure pop.

And I guess you might be wanting to know where you can download the entire album (16 songs in 24 minutes). I’m glad you asked…