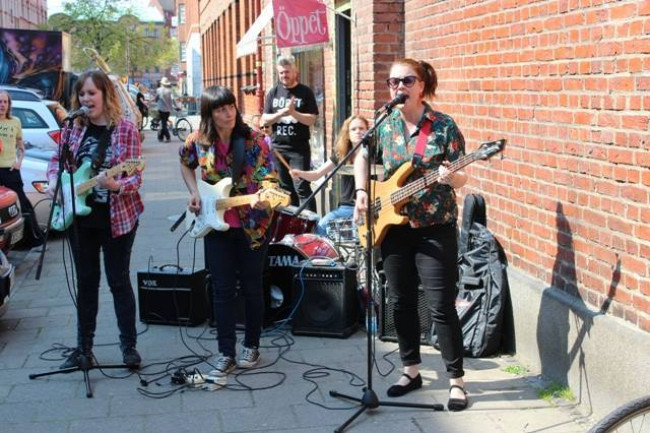 That’s how it works sometimes.

I send a recommendation out there, my friends and readers pick up on it, and they send one back. Mutually beneficial. Sounds like an ad for a building society, doesn’t it?

We go around in circles. We go around and round and round and round. No, that’s not me speaking. That’s me quoting the first ebullient scratchy song from the ‘Word On The Street’ EP by righteous Malmö feminist punks Arre! Arre! (Malmö: home to Alice Boman and The Cardigans, if I recall correctly. I’ve been there. I remember it was twilight, and clean.) We go round and round and round. Silent treatment is a guilty pleasure. I don’t know what I’m typing here. I’m just a cipher, a bad translator. Makes me think of ’78 – The Avengers, specifically (no, not the fucking superhero film, you Cross-loving bozo) – but then, most everything does when I feel down and suffering from the ‘flu. Marvellous stuff. Sparks, and sends incendiary hope across the garage millions. I guess there’s a touch of Bikini Kill too: but that’s like saying The Velvet Underground, The Beatles, Joy Division. A canon too obvious to reference, mainly. All the songs here are better than a three-banana smoothie. All of them. Maybe it’s the drumming? I’ve long noticed that most women drum better than most men. I have no idea why that should be.

“You say you’re not a sexist, but you don’t believe in equal rights.”

No, that’s not me. Though it could be, I suppose. That’s Arre! Arre! again, on a wonderful rolling song called ‘Word On The Street’. Chiding and softly venomous and a call-to-arms. It’s the fucking drums. Honestly.

Mutually beneficial. You see? Tobi Vail thanks me for my Bloods recommendation, so I ask for one back and she suggests this, although she does add (in a barbed wire kinda way), “I already told you about them six months ago”.

So I’m six months behind already. That must mean I’m catching up.

All of this seven-track EP is a smashing good time.

Looking at the above clip, it seems like it’s all about that bass. Damn straight.

Or maybe the guitars? As you were.