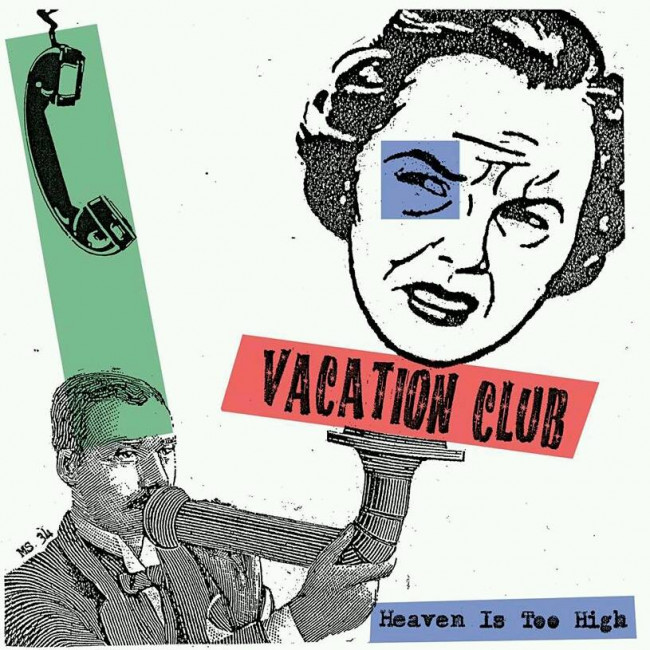 The fuck you say. From the label that brought you Thee Open Sex.

Vacation Club’s debut full-length HEAVEN IS TOO HIGH fries you blind with a most pleasant and poisonous cocktail of psych-pop. The Indiana four-piece delivers infectiously poppy bubblegum chewed up and spit out by the agitated and chemical laced mind of misspent Midwestern youth. In the tradition of HOOSIER HYSTERIA proto-punk, ala the Gizmos and the Panics, the Vacation boys turn the sounds of rocknroll’s distant shores into a homebaked brand of mutant sunshine and junkstore adrenaline. HEAVEN’S 11 tracks are sweet-tart melodies wrapped in colorful capsules that will turn your innards into a kaleidoscopic feast of rocknroll’s most alkaline fruit flavors. Catchy punk riffs and teenybop backup vocals dart through stratospheric layers of reverb and corrosive fuzz guitar. With equal parts Daniel Johnston’s boy wonder and Johnny Rotten’s snottiness, Samuel James’s hormone-fueled and soda-lacquered voice cuts through all the paranoid chatter and leaves your better angels dead on the dissection table. Because heaven’s too high and she’s worth every shot.

I have little to add to that. Cos they’ve nailed it (except for the Americanised spelling).

There’s a Blank Realm connection (my initial tip-off)… and sure you can hear The Velvet Underground. It’s cheap and nasty and (as they say) snotty, and laden down with attitude. I say “laden down”. What a crap choice of words. Freed by, ennobled by, liberated… The whole album is a snot-nosed (wait!), bratty, self-obsessed, sweet-ass brawling boozing belligerent psych rock’n’roll delight, unembarrassed and unencumbered by the past and oozing with summertime promise. Poisonous like that fancy pot of honey folk take during pregnancy. I say “folk”. What a crock of crap. I mean, righteous rockin’ sexy mamas.  It’s like Hunx And His Punx if they’d listened to The Black Angels (man, that one creaks). It’s like Dylan if he’d learned his trade from The Trashmen (I know the time scale is all wrong) and had a good sense of rhythm. I say “good”. I mean basic. It makes me happy and liberated like Hookworms. You never lose that buzz, you know. You never lose that buzz. Dylan? I’m talking The Magic Roundabout, you freak tail. It’s pop like five dollar Bill. It explodes in a frenzy of grinning. It makes me miss Australia, more specifically Brisbane (wait!). Nasty.

You don’t know who Blank Realm are yet? The fuck you say.

It’s what Springsteen would have sounded like if he really was the “next Dylan” and that meant the psychedelic, speed-freak Dylan of ‘Tombstone Blues’ and eye & rooftops & quazimodo. Album Review: Blank Realm – Grassed Inn (Fire/Bedroom Suck)