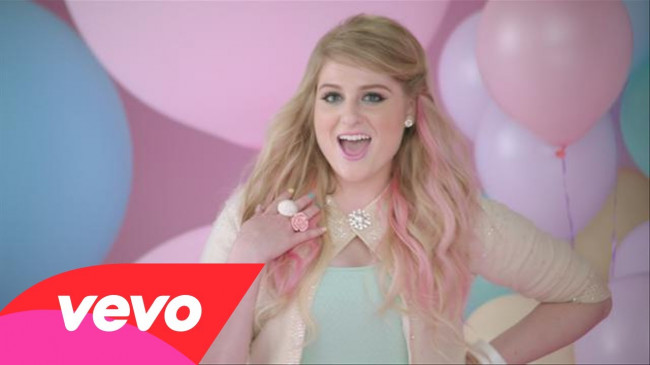 Wow. Someone could write a thesis around gender discrimination and wanton bullying misogyny just based around the comments for this song. Number one in the States. Fucking good on ya, you (marginally) altered States.

Dear sloppy fat girls, please stop co-opting the curvy bootylicious thing. You’re fat and gross not hot. You’re not Jlo. Yours Truly, A dude who loves a nice big ass in his face.

On one level, it’s a throwaway pop single with lyrics that could certainly be interpreted as body positive.

On another level, there’s no WAY this song is promoting obesity.

Point three: what a fucking killer bass line. It reminds me of Deee-Lite.

Point four: there’s no such damn thing as throwaway pop – everything in life is only as important as the meaning invested in it, and if you’re telling me a generation of pop fans haven’t already taken the message of ‘All About That Bass’ on board while shaking their booties and having any amount of fun and that the song still has no significance… no, don’t. Just don’t. Maybe it ain’t much. But maybe it’s just OK to enjoy yourselves. Maybe just enjoying yourselves is a political statement, depending on the context. (Maybe? Who am I kidding?)

Point five: it’s OK when The Beach Boys do it but not Meghan Trainor? Are you fucking kidding me?

One one level, it’s like Lily Allen minus the cocaine.

On another level, it’s like Lily Allen back before she applied botox to her own music. (I have NOTHING against Lily Allen. I love her early stuff, just don’t like the smug media-fed nature of her recent music.)

Point 8: it’s just turning into spring here. I heard this song for the first time over 25 minutes ago and have played it eight times over already. It reminds me of what I once loved about Eliza Doolittle. It’s OK. You can scorn me if you want, but I really do love pop music… even half-assed pastiche if the mood catches me right.

According to Haley, criticism is OK when it comes to politics or the ‘real world’, but not when dealing something as insubstantial and throwaway as pop music. But taste serves social distinction – so, if anything, the music that you choose to listen to is actually more important than politics. It directly feeds into your identity (defined both in relation to yourself and the outside world) and is something you have control over.