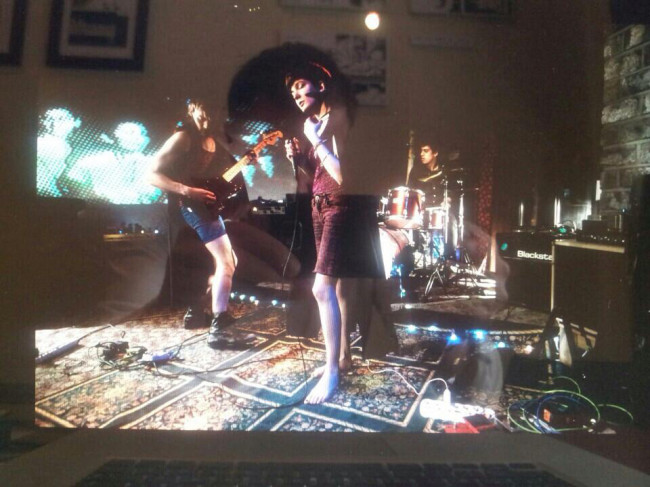 Never understood the problem some of my former colleagues had in discovering cool (great) (fresh) (exemplary) (entertaining) fine new music. You go on Facebook, boldly ask ‘friends’ to “recommend me some music” and within a few minutes your Facebook feed is awash with a miasma of eccentric and charming and noisy and heavy and intoxicating (great) (fresh) (exemplary) (entertaining) new music. The rock? Indeed, it rocks. The eccentric outsiders? Indeed, they stay eccentric and on the outside. The subtle pop hearts? Their hearts are subtle and filled with pop. And so on.

Although today’s choice is in danger of being shunted aside in favour of the orgasmic washing machine fervour of THESE MIGHTY FINE REPETITIVE BEATS (yes I’m looking in your way down the ages This Heat; there again I often do)… I’m going to stick with my instinct here. Rarely proves me wrong, you understand – and when it does then at least it fills a gap, much like the third round of Minstrels do with my teeth. I do. You know?

Trouble is, I now can’t STOP LISTENING TO THIS MIGHTY FINE REPETITIVE CONFUSING BEAST but… wrench. Here we are.

Here we do. Here’s how we do indeed.

It’s a fucking free download too, free entry into a wonderland of eccentricity and gentleness and the sort of music you ain’t ever going to hear boy cos you’re chattering far too loud already. On the surface, perhaps welcoming. Underneath, perhaps disorientating and woozily chummy. Underneath that, the pavement. Under that, the beach.

Sometimes, the simplest of recommendations can swing it. Here’s how my eye was drawn.

Well, you already know about The Bastards Of Fate, so I’ll direct you to Nice Legs in S. Korea… http://wearenicelegs.bandcamp.com/releases They’re Bastard-approved!  (I approve as well)

The Bastards of what? I hear you somewhat silently scream.

The Bastards of fucking Fate. To wit:

I gave up writing seriously about music when NOT ONE BASTARD MUSIC MAGAZINE put The Bastards Of Fate, Maria & The Gay or Tunabunny on their front covers in 2013. Fucktards. And now… listen, if you ain’t got much time and I’m sure you ain’t, this is the Age of Indifference we’re living in, then run straight to Song 3 on Lullaby Land by eccentric South Korean dream pop band Nice Legs, that’s the one that contains 87% of the magic today. It’s the one that will linger long after your memory is a blur of failed trysts and heated circular arguments. And you just know I gotta run with that 87% and also, I gotta run.

Track 4 is pretty damn sweet, too.