The return of Everett True | 161. Glitoris 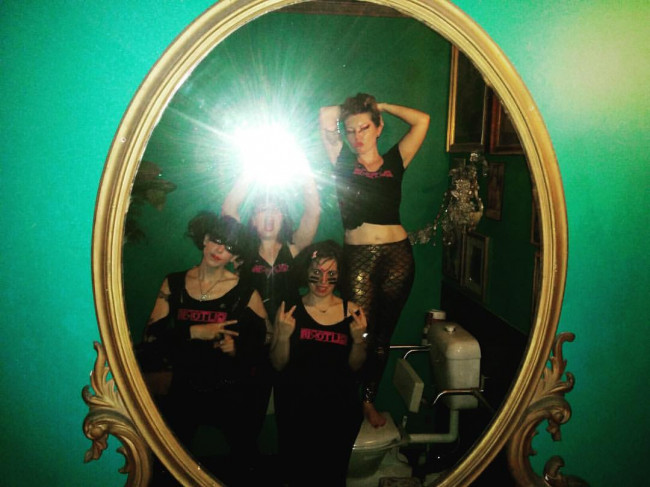 The battle is lost. There is no need for me to stick around, railing at the clouds.

The battle is lost, I tell you. I am reduced to playing loud ballbusters, KICK ASS ROCK at tepid volume, dead of night. Scared of unsettling the uncaring neighbours.

Earlier today, Isaac asked if he could put on some music (he never does this)… some jaunty repetitive computer game electronica. Within minutes, he took it off again because he realised a simple truth that I had realised years before: music ceases to be music when there is too much other aural competition. You think I am going to resist a band calling themselves Glitoris who dress like outtakes from Ladies And Gentlemen…the Fabulous Stains ragging on Donald Trump’s ass over cuntsy (that is a word, right?) in-your-face music, even when I do have to play it at tepid volume? You think totally fucken wrong, bro’.

As the ladies sing, “ra ta ta ta, ra ta ta ta ta”… wait, are they pissing on a photo of Trump there? Nice.

It ain’t pretty. It ain’t nice. It ain’t all smoothed over or sucked dry. And the battle ain’t lost, I tell you. Not when we have ladies like Glitoris out here. They play a Big Muff. Well, of course they do. Of course they fucking do.

Anyone else noticed how Donald Trump is Courtney Love, the final rock star? Let us hope not too final, eh?

Makes me feel proud to be Australian.

As one of their YouTube ‘fans’ remarks: “ROCK-N-TRASH, LEFT WING BS WITH NO RESPECT”. That’s the pull quote, right there.

One Response to The return of Everett True | 161. Glitoris