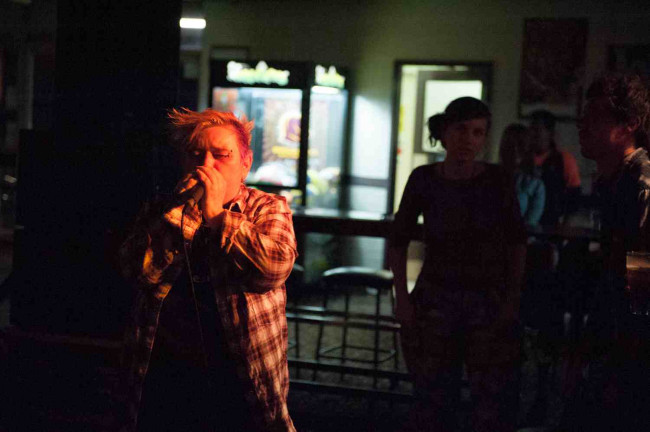 I’m obsessed with the colour of my iPhone’s case. It’s sturdy and solid enough to survive several drops to the floor. The colour is a mutant bastard changeling, though. Once white (I guess), now it’s taken on the colour and stench of decay, tiny animalistic markings scratched away at the layers. I want to tell you. I want to explain the delight I take in it sometimes. No, not delight. The feeling of containment. But I don’t have the language, the necessary vocabulary of description.

On the way down to Ipswich yesterday, I remarked how much I enjoyed travelling down the road that leads past the turn-off to Mount Ommaney. All the green, the open yards, the space. The goddamn space. Charlotte said she found it depressing, all the blankets hung in place of curtains and broken shards of glass. I didn’t see them. Lost in my student daze.

Brisbane Town. We’ll soon be leaving Brisbane Town. I’ve got to grips with places – or, crucially, felt I have – within days of arriving in them. I know the secret alleyways, the disused railway tracks, the roads not to walk down, the suburbs upon suburbs upon surburbs, the pubs and prohibition bars and rooftop terraces but not Brisbane Town. It feels like I know fucking Perth better than I do Brisbane, and we’ve lived here seven years now. That’s not a reflection on the people in these surroundings. It’s a reflection on me, and where my life is at now. Maybe that’s only right. Rock’n’roll is where I hide, as Mr Graney once sang.

I don’t understand why Bek Moore doesn’t sing lead on every track on the Scrabbled album. Here. Here’s the Scrabbled album. There’s a link just underneath. I’d been looking forward to it for two years now and when I eventually discover it I find it’s some place behind. In places it’s dank and impenetrable like I’ll remember Brisbane Town (not the sun, not the beaches an hour’s drive away, not the leafy streets and numerous swimming pools – but the dank and the grey). I’m lying. All I’ll know are trees. Trees and a social structure across that resonates like a hand endlessly slapping across my face. How did I not know there was a Scrabbled album before now? That’s so typical of me in Brisbane Town. I know nothing, less than.

There should be space but instead there’s claustrophobia and paranoia and an inability to break free. That’s Brisbane Town. Dank and impenetrable and never nasty to your face unless it doesn’t like it. This is the song that sums it up for tonight. Beauty trapped within the floorboards underneath a Queenslander. Energised and hopeful and useless and wonderful.

We went to Kazikhstan once. We were there for three days. It cost a load of money to get there. On the second day our hosts took us to a shopping centre and we didn’t understand. We wanted the sights, the tourist traps, the green.

If there’s joy here it’s not going to announce itself. If there’s a way in you think you’re going be sent a map to the entrance, an invite to the outside? This is one of my parting gifts to you: Scrabbled. More punk than you’ll ever be, punk. More vital than three highways full of personalised number plates. Real bad music, punk. Scrabbled. This song rocks harder than my head, too. This is the one that gave me hope for three crucial weeks.